Three pro-abortion foundations and one anonymous donor are funding research and subsequent studies using flawed data from the so-called Turnaway study. The funding organizations include the the Wallace Alexander Gerbode Foundation, the David and Lucile Packard Foundation, the William and Flora Hewlett Foundation, “and an anonymous foundation.”  The latest study, as documented in part one of this series, was published in the Annals of Internal Medicine. The authors, as we will document here, are all well connected to abortion and have an interest in making sure it continues unabated.

• The William and Flora Hewlett Foundation gives millions of dollars to abortion groups like NARAL, Planned Parenthood and the National Abortion Federation. They fund Gynuity Health Projects, UCSF, and the Guttmacher Institute. A stated goal of Hewlett has been “to expand access to abortion.”

• The David and Lucile Packard Foundation‘s previous website made clear their goal is “expanding access to safe abortion.” Today Packard’s website says it exists to “ensure that women receive quality abortion care by supporting advocacy in targeted states and addressing the clinic and provider shortage.” The Foundation is a substantial donor to Planned Parenthood, the National Abortion Federation and NARAL, and an original investor in the abortion pill manufacturer, DANCO.

• The Wallace Alexander Gerbode Foundation, also an investor in DANCO (granting $250,000 in 2002, 2004, and annually) grants large amounts of money to pro-abortion groups. Gerbode has been described by Inside Philanthropy as funding the “next generation of abortion doctors.”

Authors Lauren J. Ralph is a Bixby staffer and UCSF-Kaiser BIRCWH scholar and is associated with ANSIRH and UCSF.

Author Eleanor Bimla Schwarz, MD is a professor at University of California, Davis and Bixby. Schwarz served as deputy editor of the Journal Contraception and Fellow of the Society of Family Planning (SFP) where she received a 2018 grant for over $200,000 to “develop and pilot a free, online, training resource titled ‘Medication Abortion in Primary Care.'”

Authors Lauren J. Ralph, Daniel Grossman, and Diana G. Foster are each associated with the following:

2. Bixby Center for Global Reproductive Health: A taxpayer-funded abortion training program orchestrated out of  University of California, San Francisco (UCSF). The program prides itself on abortion as a focus and claims its work has “led to new methods of abortion and expanded the abortion care workforce.” Bixby trains abortion providers though its Ryan Residency Training Program. Bixby also claims to be “one of the few research institutions to unflinchingly address abortion, investigating multidimensional aspects of abortion care in the United States and globally.” Bixby has funded the Guttmacher Institute (here).

Bixby claims their work has:

3. University of California, San Francisco (UCSF): has long history in pushing abortion according to a publication in which UC honored “abortion pioneers.” UCSF is involved in efforts to remove FDA safety requirements known as REMS by sponsoring clinical trials to expand abortion and push pharmacy dispension of abortion pills. UCSF sponsored a now-withdrawn clinical trial to use abortion pills on non-pregnant women. UC Davis is sponsoring a clinical trial attempting to discredit abortion pill reversal. UC is funded by known population control advocates as well as original investors (Packard) of abortion pill manufacturer, DANCO. Other UCSF “experts” have aligned with TARA Health Foundation to expand abortion.

Daniel A. Grossman, MD, sits on the board of the Later Abortion Initiative (LAI) and is leading the push for so-called “self-managed” abortion. He sponsored a study which involves pharmacy dispensing of abortion pills. Grossman has a previous association with manufacturer of the abortion pill, DANCO, and is deeply entrenched in the abortion industry:

Diana Greene Foster is another ANSIRH staffer who opposes any restrictions on late-term abortions. She sits on the board of the Later Abortion Initiative (LAI), a group with a mission of “increas[ing] the number of sites where later abortion is available” and “expand[ing] the number of physicians who can perform later abortion, especially at 20 weeks’ gestation and beyond.” Foster has been applauded by the abortion advocacy group, NARAL. 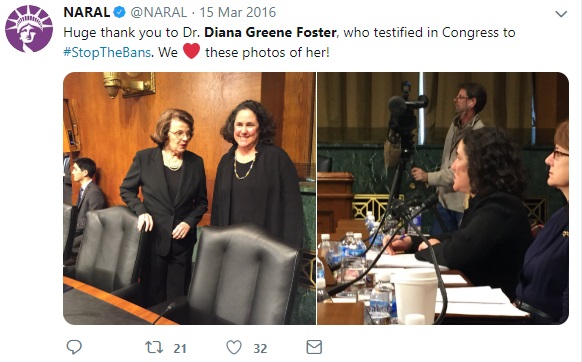 Below is what a preborn child looks like at 20 weeks gestation, when Foster advocates for abortion. According to the Endowment for Human Development, “By 20 weeks the larynx or voice box begins moving in a way similar to the movement seen during crying after birth.The skin has developed sweat glands and is covered by a greasy white substance called “vernix,” which provides protection from the amniotic fluid.”

Live Action News will continue to expose these collaborators of abortion.