In a new effort to expand the use of the abortion pill, a clinical trial will give women the abortion pill before they even have confirmed pregnancies. The so-dubbed “menstrual regulation (MR)” (or “menstrual extraction”) concept is not new; it has been around for decades since first promoted by Carol Downer, founder of the Feminist Women’s Health Centers. In 1972, Time Magazine described MR as a method “to terminate suspected pregnancies before conception has been confirmed,” because then, according to Time, “an abortion in fact is not an abortion officially.” The first menstrual regulation conference was held in 1973.

A footnote in a Guttmacher publication from the 1990’s makes it clear that “An abortion was defined as ‘any procedure, including menstrual extraction and menstrual regulation, intended to terminate a pregnancy,'” adding, “Some physicians use ‘menstrual extraction’ as a euphemism for early abortion.”

While on one hand, abortion advocates want women to “shout” their abortions, on the other, they hush it up by using euphemisms like “menstrual regulation” or “extraction,” and seem to want to avoid the idea of “abortion” altogether. The more things change, the more they stay the same…. 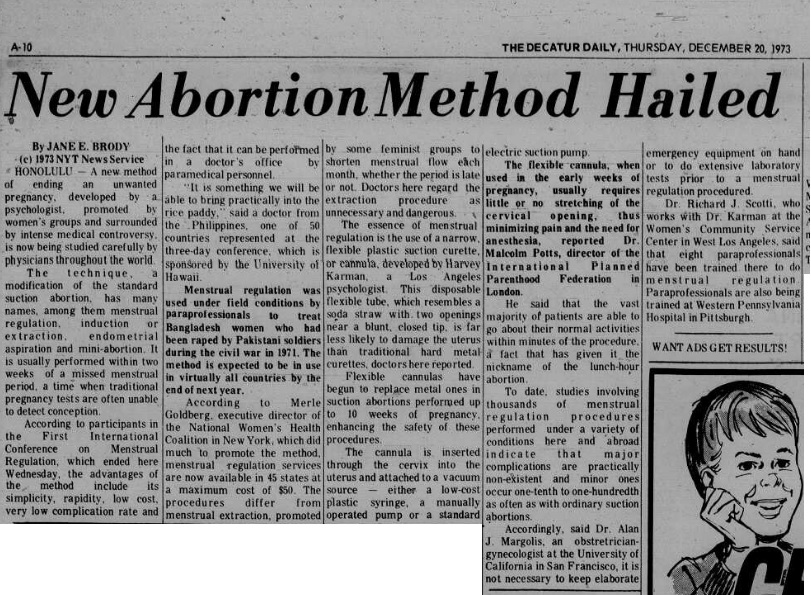 The history of menstrual regulation… began in California in 1971, when a group of self-help feminists developed a technique that allowed women to safely suction out menstrual blood and tissue. Referring to it as ME (menstrual extraction), these early self-helpers advocated that women join self-help groups and practice extracting each others’ menses around the time of their expected periods…

The article goes on to describe how “menstrual regulation” [using a vacuum aspirator to empty the uterus] has been tested in foreign countries such as Bangladesh where it was “[i]ntroduced in 1971 and defined as ‘the evacuation of the uterus of a woman at risk of being pregnant to ensure a state of nonpregnancy…'” The writers then laid out the case for several options in light of U.S. abortion restrictions:

They noted, “Finally, using misoprostol as a plan C would have the benefit of not having to label the process ‘an abortion.’ If a woman were to use misoprostol as a plan C, she would have the option to take the drug prior to even taking a pregnancy test. She would be taking precautions and could take the pill for menstrual regulation purposes. Not having knowledge of her pregnancy status could free her from guilt or self-stigmatization that she might otherwise face.”

Despite the hype that MR is not an abortion, global pro-abortion organizations like IPAS openly acknowledge that it is: 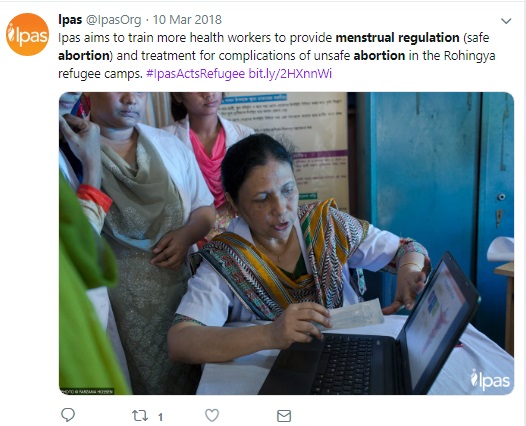 IPAS refers to Menstrual Regulation as an abortion (Image: Twitter)

Today’s Gynuity Health Projects-sponsored clinical trial method is called “Medical menstrual regulation (MMR)” and is set up to dispense the abortion pill regimen (Misoprostol and Mifepristone) to women who report a late period without determining pregnancy first. The newly dubbed method is described by Gynuity as:

… the use of uterine evacuation medications by women with late menses without confirming pregnancy status. Provision of MMR in the United States could expand reproductive choice and service options for women. This study will collect data on the acceptability, efficacy, safety and feasibility of MMR among women with missed menses of 1-3 weeks.

Gynuity has been funded by organizations known for their support of abortion and population control, including funding from abortion pill manufacturer DANCO‘s original investor, the David and Lucile Packard Foundation — leaving many to question whether the results of these clinical trials can be trusted.

In addition, the Gynuity experiments will take place at Packard-funded Carafem abortion facilities in Illinois and Maryland where they will be monitored by Gynuity’s Principal Investigator: Wendy R Sheldon, PhD. 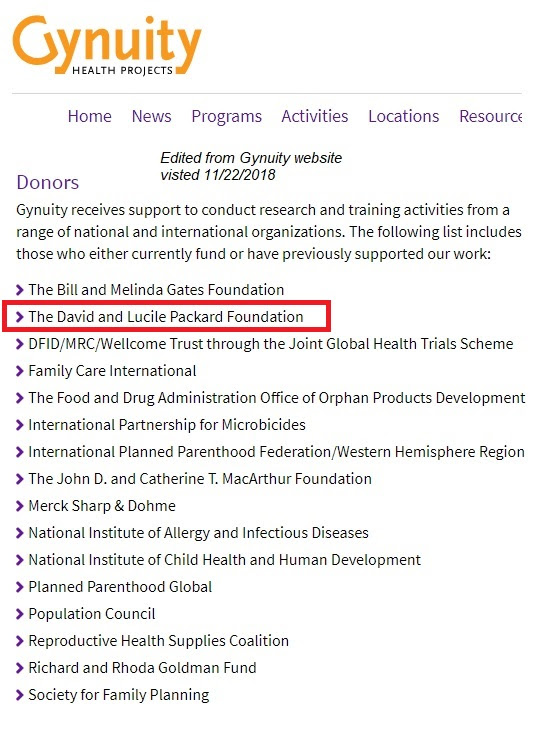 Interestingly, Packard’s money trail to Gynuity on their own website appears to have been mysteriously scrubbed, but remains online in a cached version (images below):

Gynuity’s history with Packard and other abortion insiders runs deep:

Tragically, women have died from this deadly abortion pill regimen. Women who experience medication abortion are beginning to warn others that it is not as simple and painless as it has been sold:

Live Action News has been documenting the abortion industry’s clever work-around efforts surrounding the abortion pill to evade safety requirements put in place by the FDA, known as REMS. We have also identified abortion pill collaborators like The Packard Foundation, and revealing the behind-the-scenes close connections between various clinical trials, studies (read more here) and funding streams. In addition, Live Action News has documented the push for illegal dispensing of the dangerous pills and the effort to discredit abortion pill reversal.