A TelAbortion study sponsored by the pro-abortion Gynuity Health Projects, describes potentially serious complications participants might suffer, but gives a misleading description of fetal remains that self-aborting women might see. The TelAbortion clinical trial was announced in 2015 and, as Live Action News previously documented, is being conducted at various Planned Parenthood, Choices and Carafem abortion facilities (among others) in eight states.

The experiment described in the clinical trial as “Direct-to-Consumer” seeks to mail the abortion pill regimen directly to women and even girls as young as 10, bypassing important safeguards put in place by the FDA under a system called REMS. The experiment currently includes 1,000 participants.

Gynuity  has worked to expand abortion by sponsoring abortion pill clinical trials. It was founded by Beverly Winikoff, M.D., M.P.H, who was previously employed at the Population Council, which brought the abortion pill into the U.S. and set up the pill’s manufacturer, Danco Laboratories, LLC. In addition, Gynuity is funded (see here) by Danco’s original business investor, the Packard Foundation. 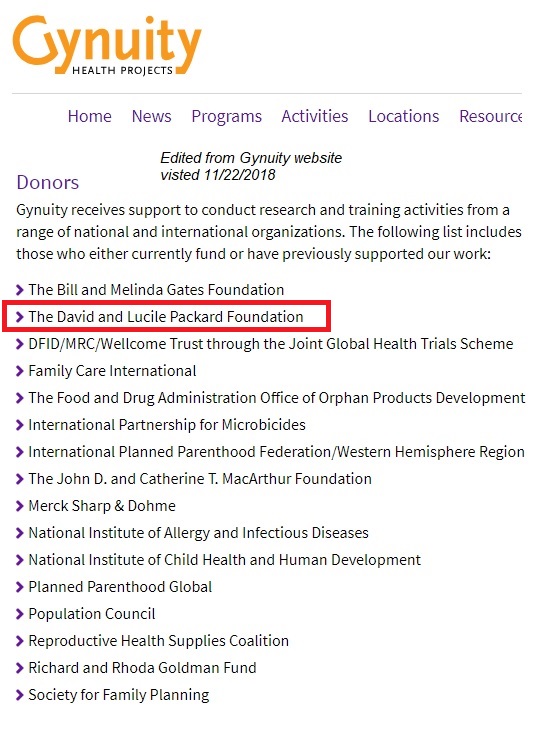 A video series uploaded by Gynuity calls the TelAbortion experiment “health care.” It is introduced to participants by the soft spoken Shandhini Raidoo, MD, on faculty at University of Hawai’i Department of Obstetrics, Gynecology, and Women’s Health. Raidoo is an abortionist member of Physicians for Reproductive Health (PRH) who moonlights at an Alabama abortion facility, according to Abortiondocs.org.

Raidoo tells potential participants of the TelAbortion experiment, “You might experience nausea, cramping, or vaginal bleeding” after taking the first pill, Mifepristone.

She then tells participants (again, potentially as young as ten) that they might experience “fever, nausea, upset stomach or diarrhea” from the second medication, Misoprostol, which “should not last more than six hours.” According to multiple reports from women, these abortion drugs can be incredibly painful, with bleeding lasting for weeks.

While Gynuity’s second TelAbortion “medication counseling” video tells participants that medical abortion has a “few rare risks” such as “pain, infection and continued pregnancy,” the third video goes into detail what those potential complications might be and warns participants that if any of these risks occur, participants should contact Gynuity immediately: 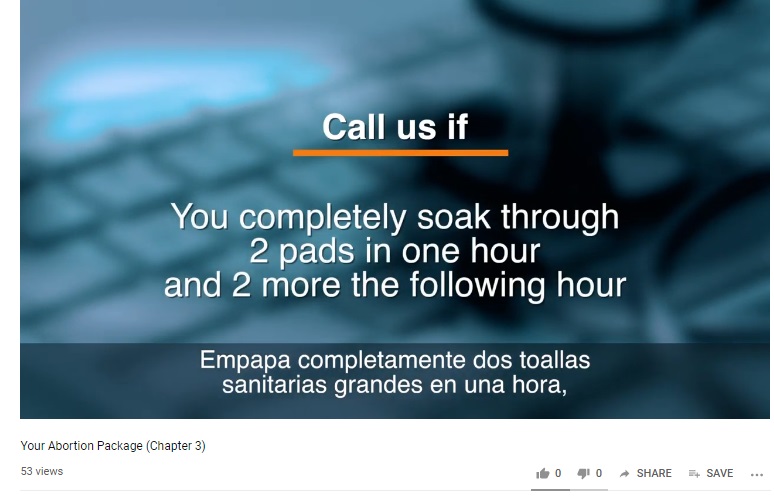 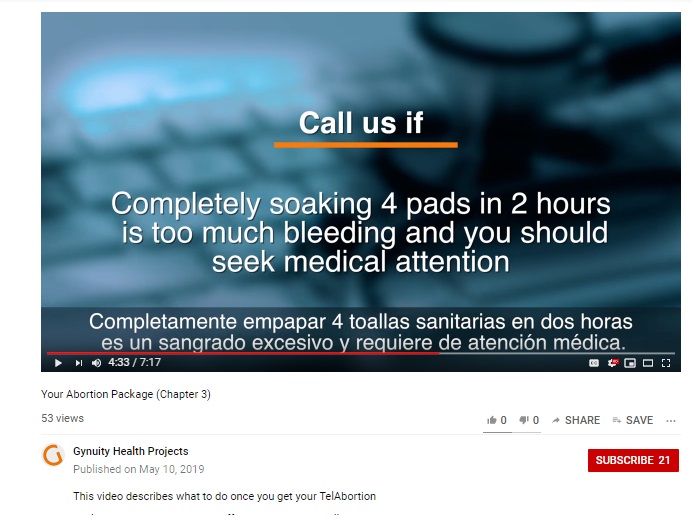 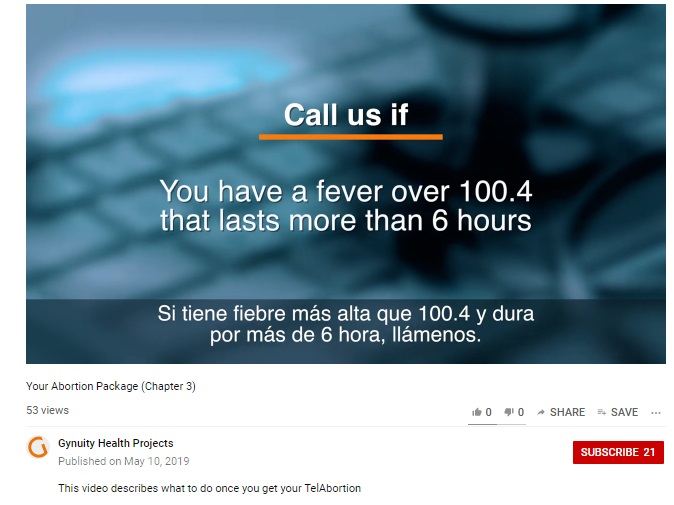 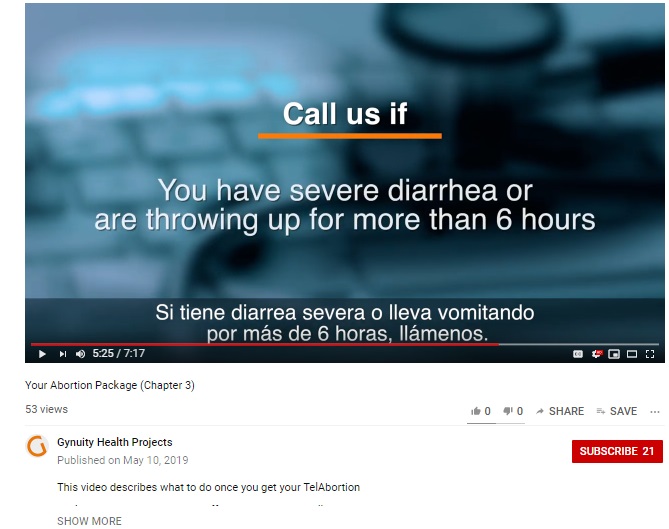 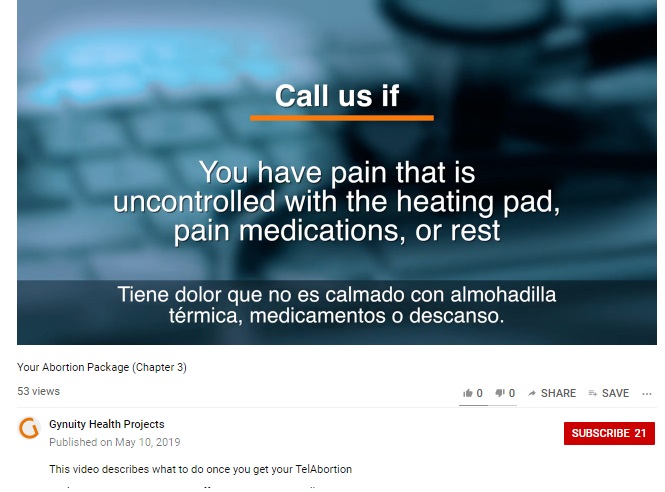 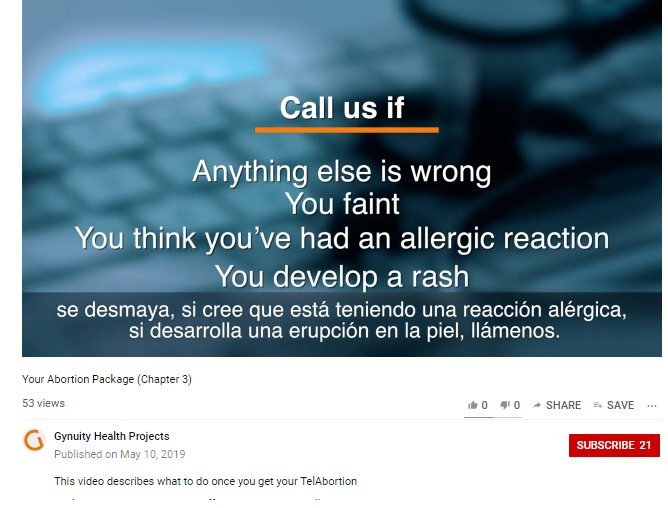 In addition to potential risks to participants, the TelAbortion video tells participants that after they take the second pill, Misoprostol, they will experience “large blood clots” that could be “up to the size of a lemon.” Raidoo adds, “Most women do not see the pregnancy tissue during the abortion. But it is possible that you will recognize it as a small pinkish-grey piece of tissue, especially if you are closer to ten weeks.” 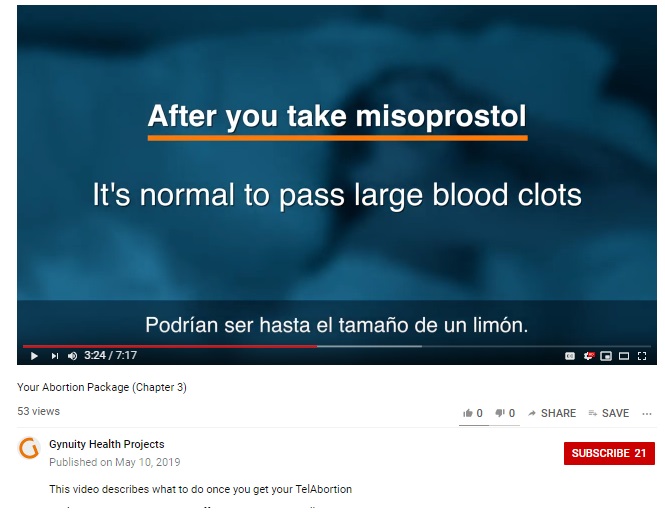 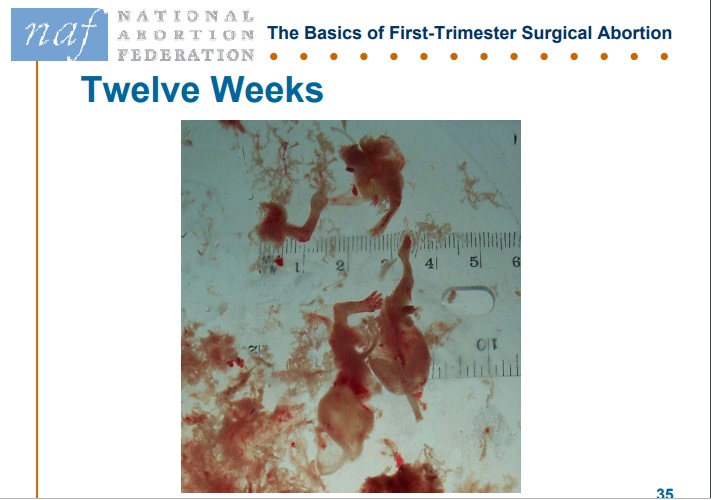 In addition, examples of complete (intact) first trimester spontaneous abortion (miscarriage) pathologic specimens, published by the Archives of Pathology, reveal how an embryo at 7-10 weeks might look before the medication abortion chemicals expel his/her fragile body: 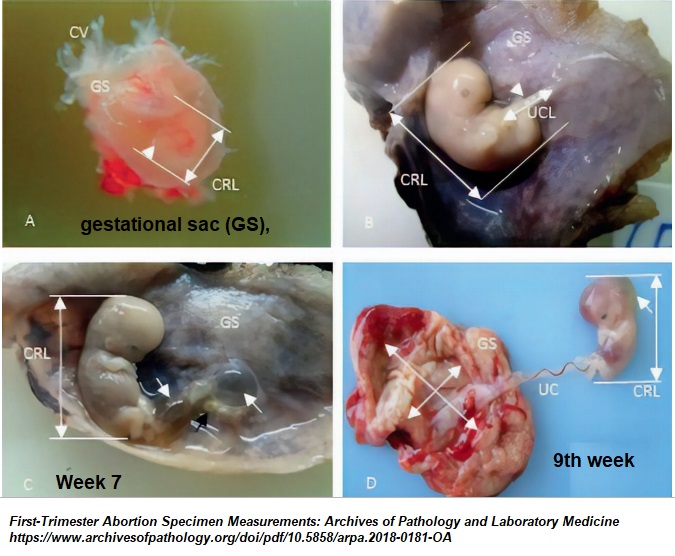 Additional images, published by abortion insiders, can be viewed at Live Action News here and are markedly similar to those published by Citizens for a Pro-life Society, Created Equal, Center for Bio-ethical Reform (CBR), and others, including my own experience, after finding and burying the broken bodies of aborted babies.

TelAbortion is just one part of a series of efforts to expand abortion and bypass FDA safeguards. Live Action News has also documented a number of abortion collaborators working behind the scenes on various clinical trials, studies (read more here) and funding streams, which are all closely connected. In addition, Live Action News has documented the push for illegal dispensing of the abortion pills and the pro-abortion effort to discredit abortion pill reversal.