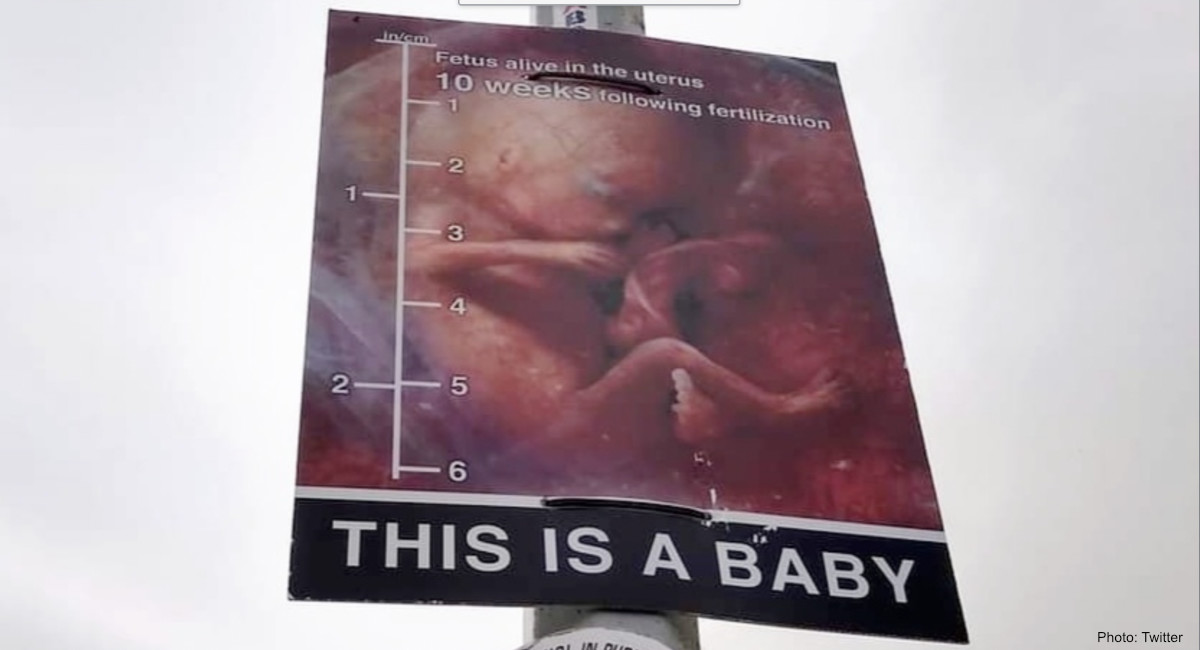 Northern Ireland Councillor Patrick Brown is calling for the removal of an image of a preborn human being in the womb featured on a pro-life poster in the town of Ballynahinch.

The remarkable image, seen below, depicts a preborn human being at 10 weeks gestation. It is not an image of an aborted child, and the poster states, “Fetus alive in the uterus 10 weeks following fertilization.” However, Brown took offense to the picture, calling it “insensitive” and “extremely graphic,” following the lead of other pro-abortion politicians who find any image of human life inside the womb to be disturbing.

“Disappointed to learn an anti-abortion poster with extremely graphic images of a foetus has been put up in Ballynahinch,” wrote Brown on Facebook. “This is insensitive under any circumstances, but particularly inappropriate given the poster is less than 100m from a primary school. Regardless of your views on abortion, no one should be subjected to this sort of imagery, especially children and those it may upset due to personal experiences.” 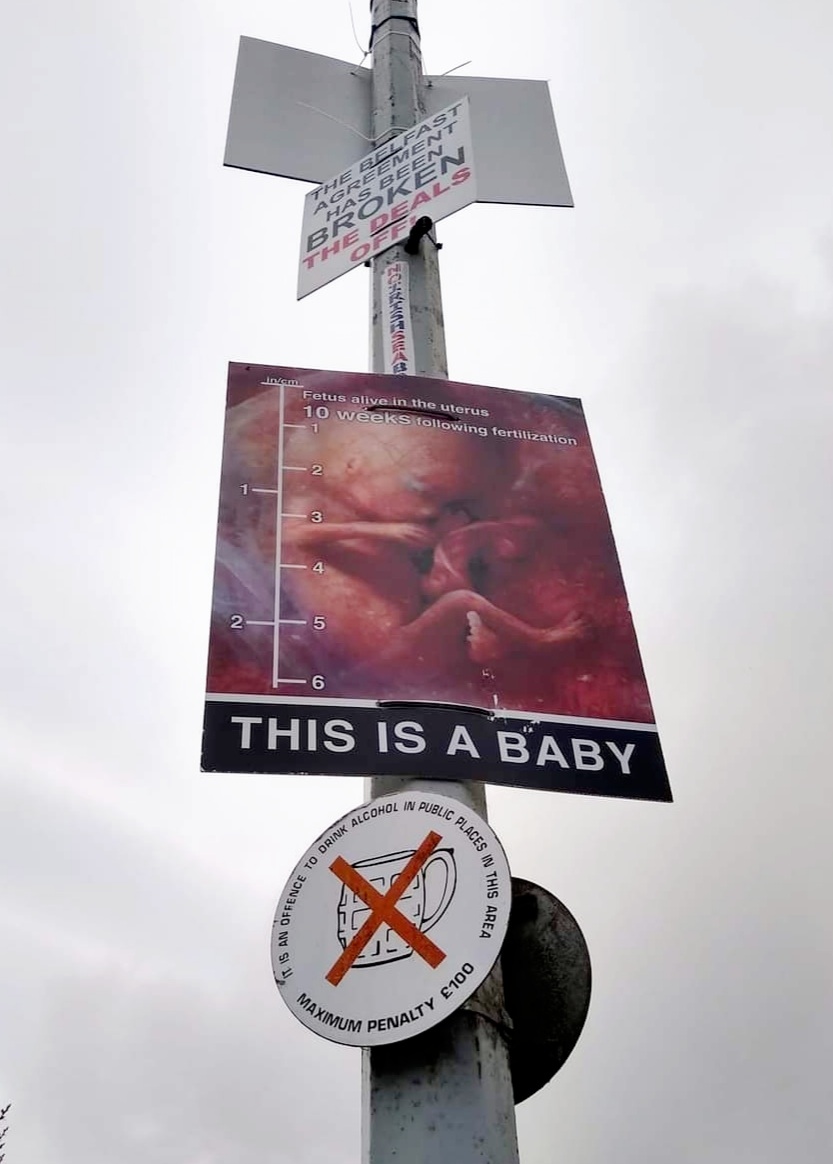 He added that he “won’t be sharing any images of it but will be speaking to relevant authorities to have it taken down.” He asked his followers to be on the lookout for similar posters that he could complain about. And then, when one commenter — who stated that she had 13 miscarriages and one living child — said women like her find such images painful, he replied, “… those who have lived experience like yours deserve to be protected from such vile imagery.” 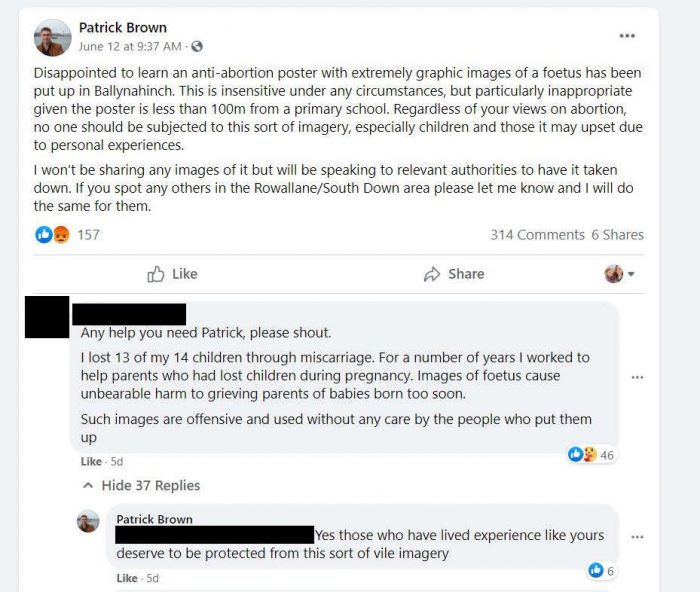 Every day, pregnant women are given images of their preborn children in the womb. Now, thanks to new technology, those images are clearer than ever, giving parents what are now essentially photographs of their babies in utero. Those women frequently share the pictures with friends, family, and even the baby’s older siblings. There is nothing “inappropriate” about the image of a woman’s living child in the womb — and a different commenter to Brown’s post had something to say in response to the objections to the image, writing:

If you helped bereaved parents then you know that innumerable images cause upset, eg a pack of nappies with the image of a baby on it; a pregnant woman; baby clothes in a story; a newborn baby; a playground, books on pregnancy in a book store; programs on tv abortion pregnancy and childbirth; the list is endless.

Yet you are not advocating to remove ‘all’ people and censor ‘all’ images because they remind ‘some’ people of a painful event which causes them upset? Why not?…

Do you have ultrasounds of the babies you miscarried?…

Just to clarify, are you pro or anti abortion? 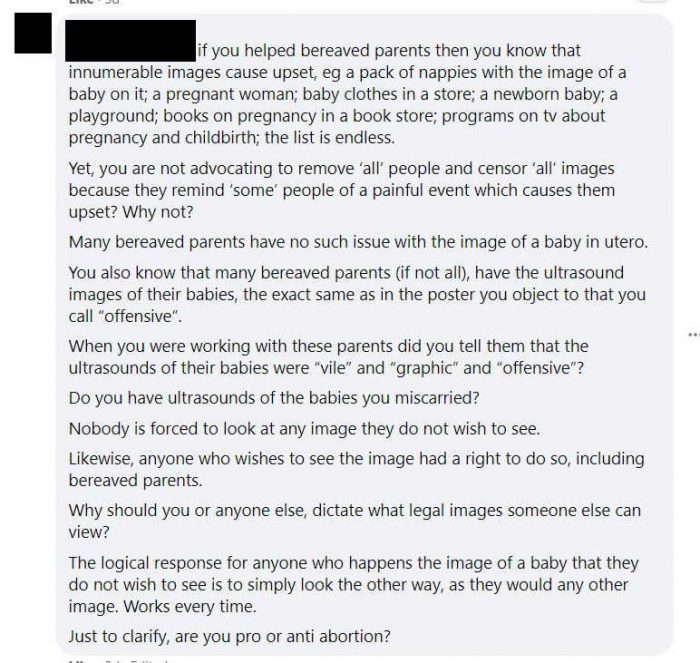 While some pro-life organizations do share images of babies who have been killed through abortion, this particular image is clearly distinguishable as that of a living preborn child, which clearly displays the humanity of preborn children — and in doing so, exposes the fact that abortion kills human beings.

As Live Action man-on-the-street interviews have shown, when people see what abortion does to preborn children, they often change their minds about their previous support for abortion.

Brown isn’t the first pro-abortion politician to take offensive to an innocent and scientific image of a child prior to birth. In 2019, UK Parliament Member Stella Creasy, who was at the center of the push to legalize abortion in Northern Ireland, said that an image of a preborn child at nine weeks gestation was “graphic” and “appalling.” She also called the image “crap” and “harassment” and demanded that such images be removed from billboards.