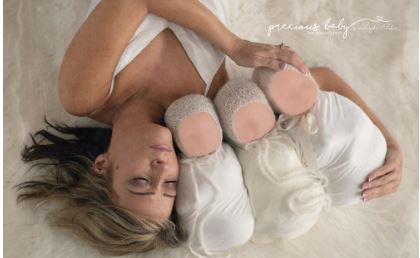 In early 2006, Dana sobbed as she walked into a Planned Parenthood abortion facility. She could feel her body shaking and she knew what she was about to do was wrong, but fear had gripped her heart. She felt she had no choice but abortion, yet it was a choice she would immediately regret.

“I remember that day when I walked in there. I remember what I was wearing. I remember how I was shaking and I was crying,” Dana told Live Action News. “I go back to that time and think maybe if they had turned me away and said this doesn’t look like something you want to do. If they had told me to think about it a little longer. Why didn’t they just tell me to go home? I would have never gone back. But they didn’t.”

A few years before her abortion, Dana was married with a young son and she describes life as being good. But then, she said, it started going bad. She soon found herself with a seven-year-old son, in the middle of a divorce. In her sadness, she reconnected with an old friend who was struggling with drug addiction. The friendship became sexual and while she never did drugs, she was in a deep depression. Then in the fall of 2005, she learned she was pregnant.

“I wasn’t excited about being pregnant, but I was okay,” she explained. “I was sick, very sick, unusually sick. And I was in a bad situation. When I finally got the doctors to do an ultrasound, the lady looked at me and held my hand and asked me what kind of fertility drugs I was taking. I told her none. This was not planned. And she said, ‘Well, honey, you’re not sick. You just have three babies in your belly.'” 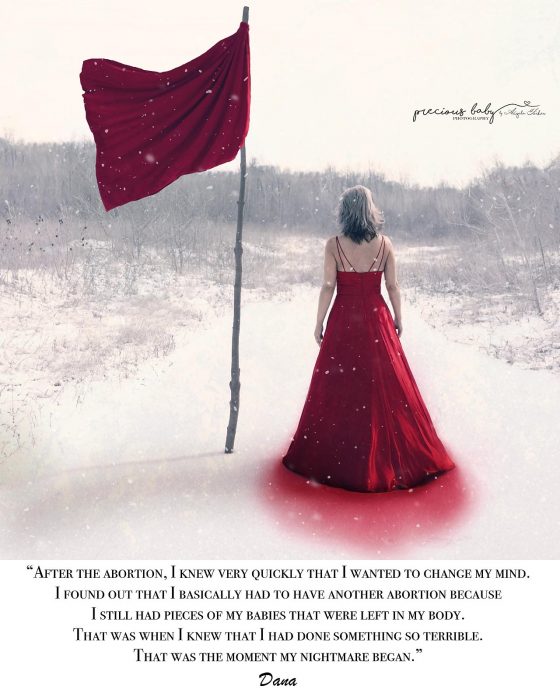 Alone at the appointment, a stunned Dana was left to feel the breath-taking shock all on her own. She didn’t know what to do, so she called her mother and together they began to prepare for life with triplets. She named her babies – Skyler, Emma, and Zachary. At this point, the babies’ father was in jail. A few months went by, and one day Dana received a phone call from someone who wanted to clue her in on some information about the babies’ father.

“This person felt the need to tell me that he was doing IV drugs,” she said. “I didn’t know that before. I was totally oblivious. The fear started to set in. I began having horrible dreams of bad things happening, of my babies being sick, of something being wrong with them. I questioned what right I had to bring them into the world if they were going to be born drug-addicted. All sorts of thoughts. And then the thought of – maybe I should have an abortion.”

Dana’s fear was so deep that it became irrational and overwhelming. She feared that her babies would suffer or have health problems because of the drugs their father was likely using when they were conceived. She sat with those panicked thoughts and then one day at 4:00 in the morning, she called her mother. She sat in the garage with her parents and told them she wanted to have an abortion. Her mother was not happy with her, but Dana called Planned Parenthood anyway. The staff on the phone were “very nice” and “friendly” but the phone call was quick and the abortion was scheduled for the very next day. Dana was four and a half months pregnant.

READ: Parents of triplets: Doctor wanted us to have selective reduction abortion

“I think I even told my mom I knew what I was doing was wrong because of how I was feeling,” explained Dana. “But I made the decision and I was gonna do it. And I just didn’t think I was strong enough. If something was wrong with them … what would I do? How would I take care of them? What if something happened to them and they didn’t survive?” 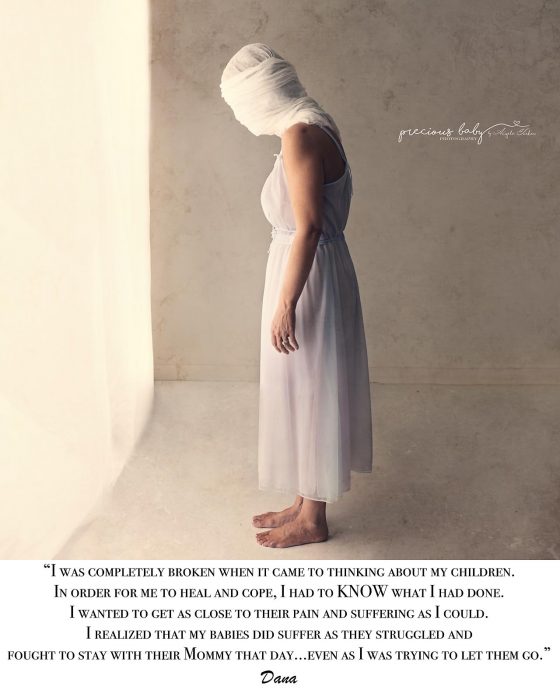 Though her mother was mortified at the decision to abort, she went with Dana to the abortion facility and stayed by her side through the entire process — even the abortion itself. She had received no counseling from Planned Parenthood, and no information on the type of abortion procedure the abortionist would be committing. Dana was given a drink to try and calm her and stop her body from shaking. The next thing Dana knew, she was waking up in a white chair.

“I remember the white chair like it was yesterday because there were so many white chairs,” she said. That’s when a Planned Parenthood staff person told her she wasn’t pregnant anymore. Within two hours, Planned Parenthood wished her luck and sent her home with antibiotics and the plan to lie and tell everyone, including the babies’ father, that she had miscarried. Dana’s feelings of regret, though, were immediate.

One week later, Dana was still bleeding, and Planned Parenthood told her she would have to come back. What she learned there would add more heartbreak to her life.

“I survived what a lot of women don’t survive,” she said. “I still had baby parts in my body. So I had two abortions. I didn’t have one. Because their little baby parts were still left inside me. And that makes you feel like that last piece of them is trying to hold on to you.” 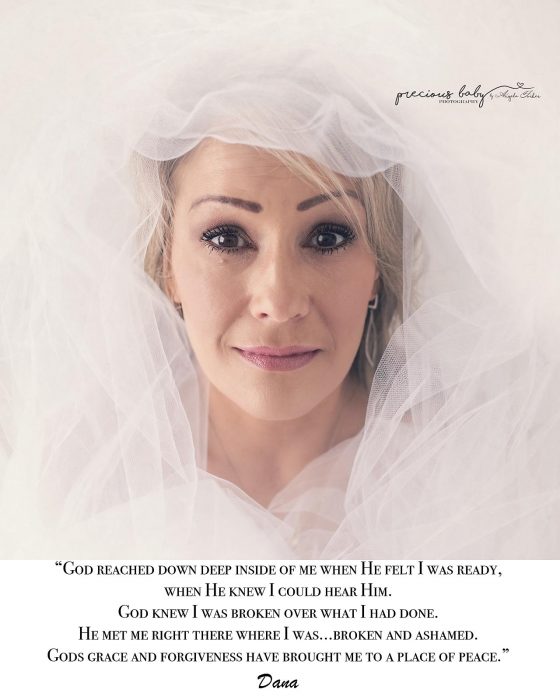 Dana lived with the grief of her mistake, and when the babies’ father was released from prison, they resumed their relationship. She continued to make what she described as “bad decisions.” In late 2007, she learned she was again pregnant. This time, she decided to escape the relationship and keep her baby. She now has an 11-year-old daughter whom she calls “wonderful” and “amazing.”

When her daughter was four, Dana met her now-husband, who adopted her daughter. The father of her triplets is back in prison. It was after meeting her husband that Dana began to talk to God. She wanted to begin grieving her children and be able to find forgiveness.

“Everyone would say the abortion was God’s will and I had to do it,” she said. “Well, it wasn’t God’s will.”

She began researching abortion, especially what an abortion looks like on a woman who is four and half months pregnant like she was.

“I had to know what I did to them. I watched the Live Action abortion procedures videos. All of them. Because you go through the guilt and you want to start doing something to make a difference but you have the guilt of ‘How can I preach life when I took three lives?’ But that’s what I had to do because God forgave me. If He forgives me then I feel like I have to do something with that.”

Dana watched every Live Action video she could and realized that her babies did suffer during the abortion. She also realized that Planned Parenthood should not have given her an abortion in the emotional state she was in. “Planned Parenthood takes broken women and they feed off of them,” she said. “It’s like cancer feeding on sugar.”

Dana also finally understood the words her mother said to her after the abortion: “I don’t ever want to see something like that as long as I live.” 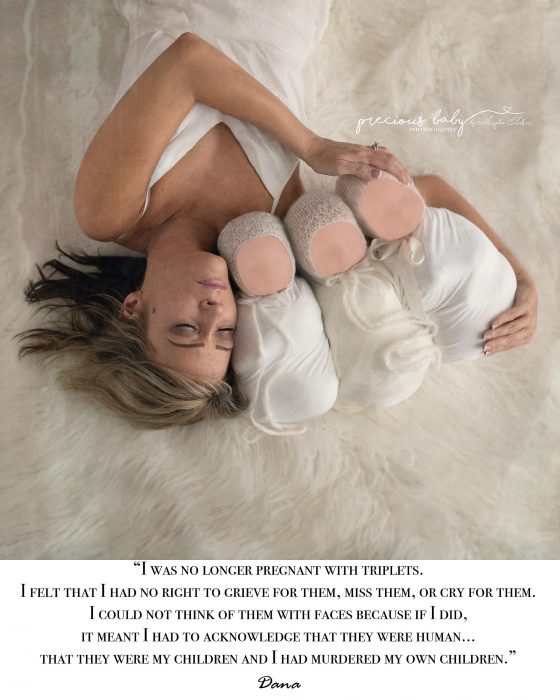 “As hard as it was for me, I needed to see what my children went through,” she told photographer Angela Forker for the After the Abortion photo series. “I had to know. I had to know if they suffered, I had to know if they felt pain…. I had to know what they went through. I WANTED TO GET AS CLOSE TO THEIR PAIN AND SUFFERING AS I COULD. And I did. That was the day I realized that my babies did in fact suffer and that yes, they struggled. They suffered as they struggled and fought to stay with their Mommy that day… Even as I was trying to let them go. They still wanted their Mommy.”

Today, Dana feels blessed to have her living children, but the memory of her aborted triplets still haunts her daily. If she could tell them one thing it would be that she’s sorry. “I’m sorry I wasn’t strong enough. I’m sorry that I didn’t know I loved you as much as I did. And I’m sorry I didn’t get to be your Mommy. But I will one day,” said Dana.

Dana knows that her triplets were a blessing, but she didn’t see it at that time in her life. Now she is dedicated to helping end abortion and she hopes she will live to see the day when abortion finally becomes illegal.