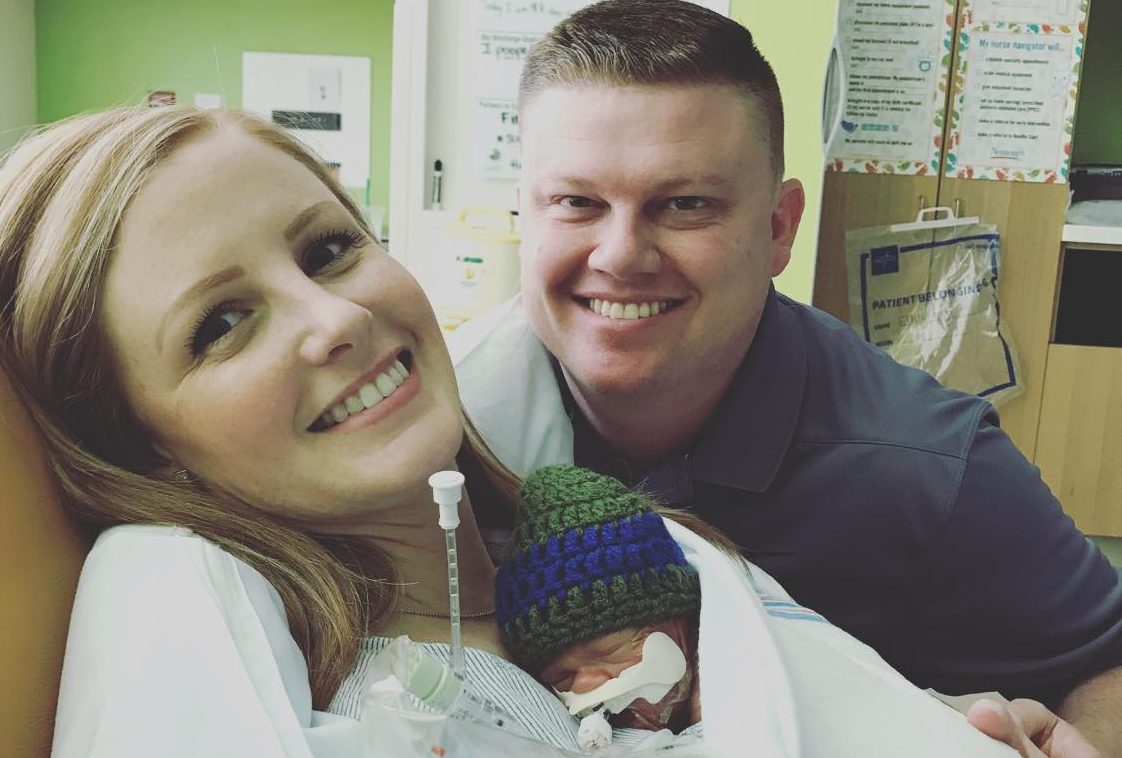 Finn James Hill — or “Fighting Finn,” as his family and fans call him — is home from the hospital after spending 113 days in the Neonatal Intensive Care Unit (NICU). Finn was born more than 15 weeks early and weighed just over one pound at birth — considered a “micro-preemie.” Given just a 50/50 chance of survival, he has certainly earned his nickname.

Finn, however, may not have been born at all if it weren’t for a couple who was willing to donate the embryos they created during in vitro fertilization to another couple who was struggling with infertility. An estimated one million embryos are currently frozen in the United States. At least five to seven percent of them are considered abandoned.

Jessica Hill and her husband Chris had been trying to have children for nine years. They also attempted IVF, but as happens with so many couples, the IVF failed. IVF is often sold as the best way to get pregnant while experiencing infertility, but the overall successful pregnancy rate is only 22.4 percent, according to WebMD.com. Depending on the diagnosis given, using Naprotechnology, a natural treatment for infertility, has successful pregnancy rates ranging from 56.7 percent to 81.8 percent. 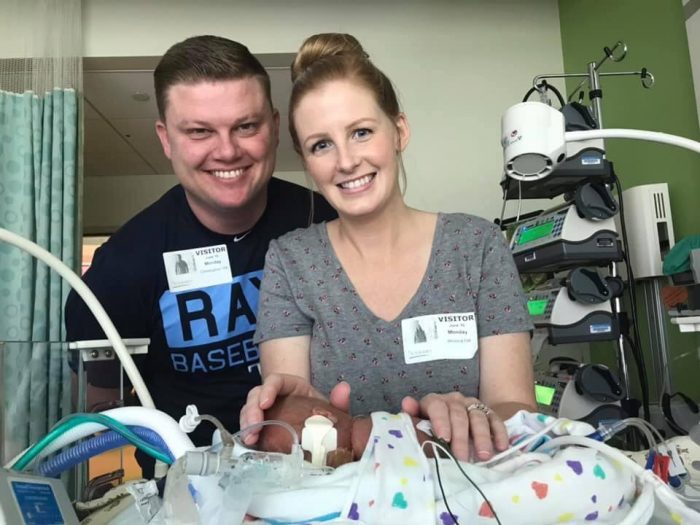 IVF hadn’t worked, so the couple began researching embryo adoption. After connecting with a couple on Facebook, the Hills adopted eight embryos from them. The first attempt at implanting an adopted embryo failed, but after the second attempt, they learned they were expecting twins. Sadly, they lost one of the babies.

Then, at 24 weeks gestation, Hill suffered from a blood clot which caused her water to break. The doctor told the couple that baby Finn would be safer outside the womb than inside, despite only a 50 percent chance of surviving if born at 24 weeks. Baby Finn was born via emergency C-section on May 21, 2019. His due date had been September 6.

“I felt a little bit like a failure, to be honest, because one second he’s inside of [me] and I’m protecting him, and the next he’s out and in a complete separate part of the hospital,” Hill told Good Morning America. “It was terrifying.” 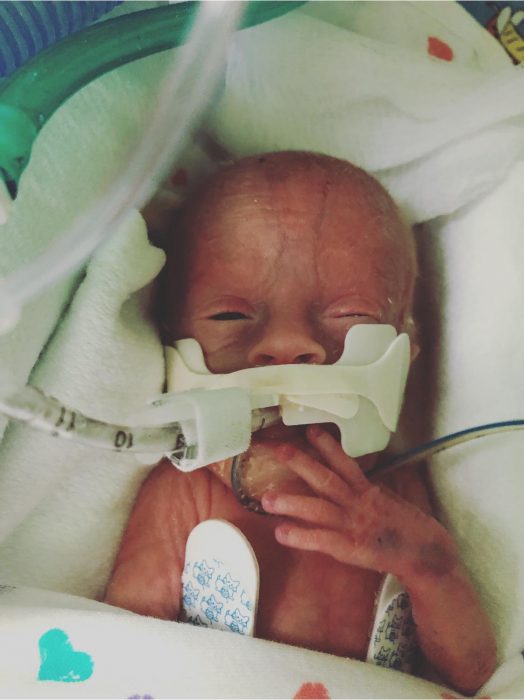 Finn fought hard while he used a ventilator and underwent surgeries including one to fix a hole in his heart and one to help fix Necrotizing enterocolitis (NEC), a life-threatening illness that affects premature children’s intestines. As he continued to improve thanks to the surgeries, Hill was finally able to hold him for the first time on June 30.

“It was unbelievable,” she explained. “You only get to hold their hands, and I had to make due as far as touch goes, but it was a huge relief to watch his stats improve [as I did] skin-to-skin with him. It made me feel like my mom duties were kicking in and he knew who I was.”

After four months in the NICU, Finn was able to go home weighing five pounds, five ounces, according to GMA. 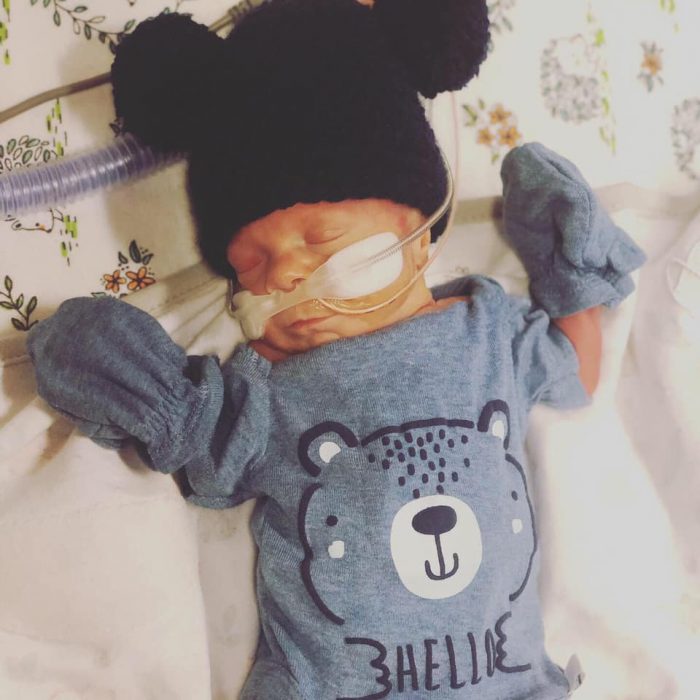 “It didn’t hit me until we left and it was the three of us for the first time,” said Hill. “I knew we wouldn’t have to take him back. It was everything we hoped and prayed for.” She says Finn “always has a grin on his face” and is “a joy to be around.”

“We’re grateful this couple gave us our family,” said Hill. “There’s not a better gift that you could give… to give people the opportunity to be parents.”

Embryo adoption is increasing as more couples seeking to adopt also want the experience of pregnancy. With hundreds of thousands of embryos frozen in time and often abandoned by the parents who once spent thousands of dollars to create them, allowing other couples to adopt those “extra” babies considered by most to be an ethical option. Some parents do, however, opt to destroy their extra embryos or donate them to science. 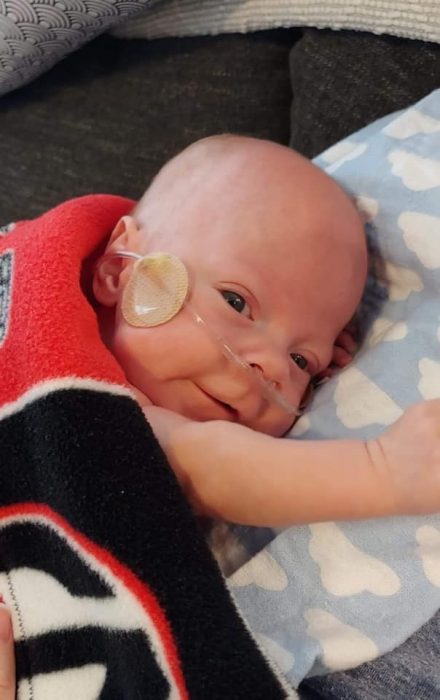 Finn was thankfully given his chance at life and is doing well. He is visiting the pediatrician on a weekly basis until he reaches six pounds, according to the family’s Facebook page. He currently weighs five pounds, 13 ounces.

As Hill told ABC Action News of her preemie, “When his entire hand fits around your fingernail, it makes you realize just how precious life is.”