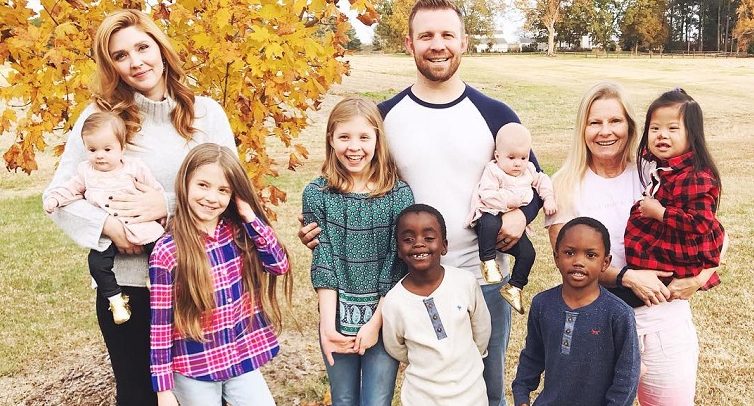 Angela and CR Braniff hear it all the time: “Are they all yours?” When the family is out and about with all seven children in tow it isn’t uncommon for people to do a double take. The Braniff children are all under age 11 and include twin baby girls. Only two of their children are biological. The rest were adopted into the family.

“It was just something that had kind of always been on my heart,” Angela told TODAY. After they had two biological daughters, they began to look into adoption.

They told TODAY that as newlyweds they moved into their first house planning to “fill it with babies.” After having two biological daughters, they adopted Noah from the Democratic Republic of the Congo in 2012 when he was nine months old. They say they wanted him to have a brother so they adopted Jonah at just seven weeks old a year later through domestic adoption.

Then came Rosie in 2016. Angela had been scrolling through social media when she saw a post by a friend who advocates for children looking for their forever home. It would be another expensive and timely international adoption and Rosie has Down syndrome, but she was “just the cutest little thing” said Angela, and they couldn’t walk away, especially when they saw that Rosie was born on Angela’s birthday.

After the three adoptions, the couple thought they would try for another biological child but were shocked to find out they would not be able to conceive again due to secondary infertility. So they began to research embryo adoption and adopted two embryos. In 2017, Angela gave birth to Ivy and Amelia.

“When couples go through the IVF process a lot of times they’ll end up with more embryos that they can or want to use,” she explained in a video on her YouTube channel This Gathered Nest. “… So they’re left with few choices. It’s either pay to keep them on ice indefinitely, destroy them, or you can adopt them out to another couple. And so that’s basically what we did. We adopted embryos.”

IVF, or in vitro fertilization, is the process of creating human embryos in a lab. 400,000 embryos are currently frozen in the U.S. and it’s a tragedy that these lives are created and kept on hold to possibly never get their chance to be born because they don’t fit in with their parents’ plans.

“It’s so crazy to me,” Angela said at the beginning of their embryo adoption journey, “to think that we have these little, frozen babies and they’re just waiting for us. They’re just waiting to be defrosted and given a chance at life.”

With seven kids, life is wonderfully chaotic. The family keeps a running list of chores and say the kids know what is expected of them each morning when they wake up. Angela even homeschools some of the children while others attend public school because of the resources available to them for their specific needs.

“We both work really hard to give our children a comfortable life,” Angela told TODAY. “But ultimately, if we can provide a family and love, that’s what our kids need most. We can’t always say yes to everything they want or want to do, but we make every effort to support them in their individual passions and goals.”

Though they say they are “at capacity,” the couple is not opposed to adopting more children in the future, and CR told TODAY:

I don’t think either of us will ever say ‘never.’ If there’s a kid out there that needs a home and we have the ability and the space in our hearts to do something I’m sure we would.

No matter how chaotic life gets, they know it’s all about the love they give their children.

“They don’t remember that mom didn’t get a load of laundry done that day, or that the dishes sat in the sink,” said Angela. “They just remember how they felt. Did they feel loved today? That’s all the kids care about.”