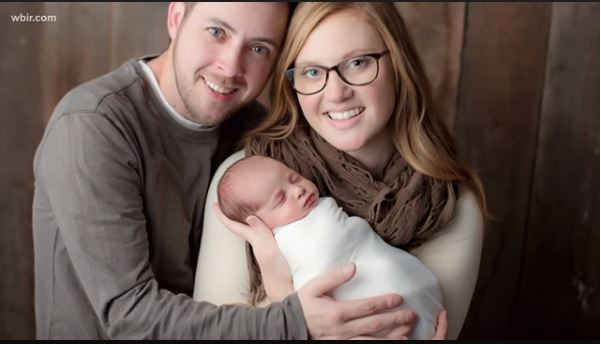 When they were married over seven years ago, Tina and Benjamin Gibson knew that they weren’t going to be able to have children naturally. Over the years, they became foster parents and thought about adopting one day. What they couldn’t have known, however, is that they would turn to embryo adoption and would set a record.

Benjamin Gibson has cystic fibrosis, a genetic condition that leads to the build-up of mucus throughout the body causing major problems with the digestive and respiratory systems, as well as other areas of the body. 98% of men with CF are infertile due to the failure of the vas deferens to develop properly. Knowing this, the couple decided they would adopt and they also became foster parents. It was during this time that Tina Gibson’s father mentioned embryo adoption to the couple.

“I was like, ‘Well, that’s nice, Dad, but we’re not interested. We’re knee-deep in foster care right now,’” Tina Gibson told CNN. “I kind of blew it off. I had no interest in it.”

MIRACLE BABY: Emma Wren was born after being frozen for more than 24 years as an embryo. Her mother says she’s a miracle and will have quite the story to tell someday. @wbir READ: https://t.co/iSAw1Yk1jQ pic.twitter.com/k6TFCqLJNg

As the couple headed off for an eight-hour car trip, the idea of embryo adoption began running through their minds and they started to research what they could on their cell phone. In August of 2016, they decided to go for it.

After meeting with the National Embryo Donation Center, a faith-based organization that aims to protect the sanctity and dignity of human embryos, the couple went through a home study, a procedure to remove a polyp in Tina’s uterus, and the combing through of 300 profiles of genetic parents of available embryos. Finally came the day when three previously frozen embryos (biological siblings) were transplanted into Tina Gibson’s womb. One of the embryos survived. That’s when they learned they had set a possible world record by transferring what is considered the world’s oldest frozen embryo – 24 years old, just a year younger than Tina Gibson herself.

“Do you realize I’m only 25? This embryo and I could have been best friends,” Tina Gibson realized.

But the couple couldn’t have cared less about a world record – they just wanted to a baby.

“I just couldn’t believe it that I was carrying a baby,” Tina Gibson told NBC 10. “It was just something we didn’t think would be possible to have that right in front of me and to make it tangible this year. It’s just amazing.”

Just after Thanksgiving, on November 25, 2017, the Gibsons welcomed their first child Emma, weighing six pounds eight ounces. She had been frozen since October 14, 1992.

“As soon as she came out, I fell in love with her,” said Benjamin Gibson. He told NBC 10:

Emma is such a sweet miracle. I think she looks pretty perfect to have been frozen all those years ago.

The couple still has two remaining adopted embryos – Emma’s biological brothers or sisters – whom they are considering implanting in the future. However, nothing is set in stone.

“We wanted to adopt, and I don’t know that that isn’t going to be in our future. We may still adopt,” said Tina Gibson. “This just ended up being the route that we took. I think that we would have been equally elated if we were able to adopt.”

The National Embryo Adoption Center has seen 700 pregnancies carried out through their program – about 10% of all embryo adoptions in the country. According to a report by 60 Minutes, there are 400,000 embryos currently frozen in the United States. Meanwhile, there are 36 couples waiting for every one baby who becomes available for adoption.