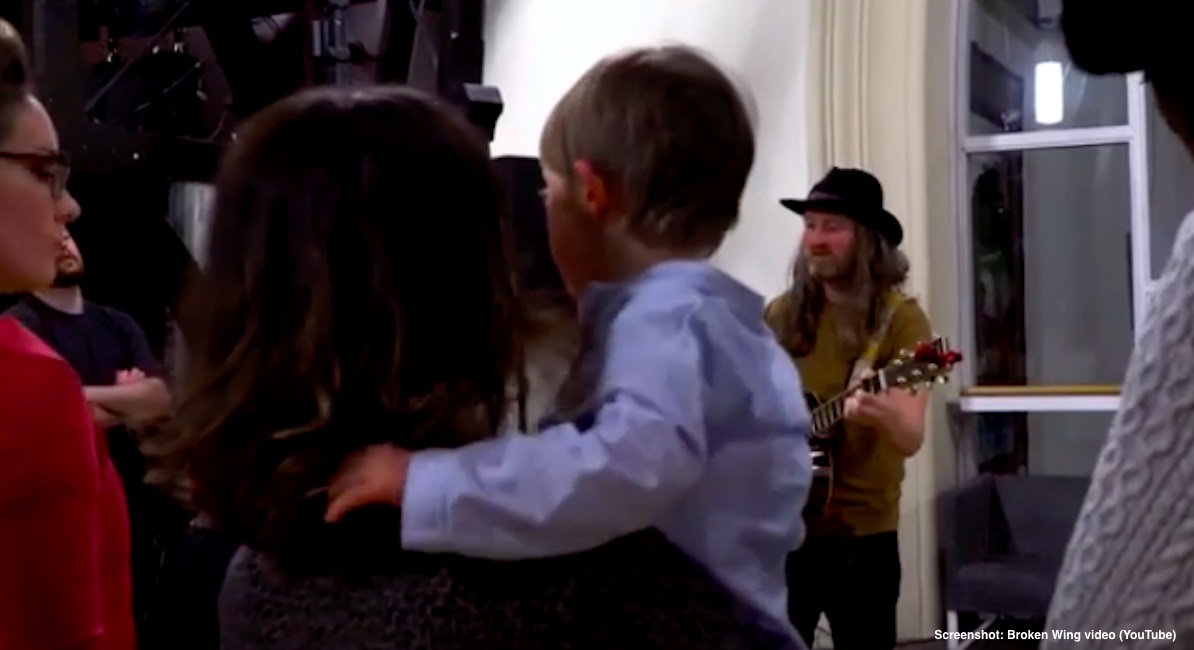 Many parents are terrified when they hear their child has a disability like Down syndrome, and Irish rocker Corman Neeson was no different. In 2014, Neeson seemed to have everything going for him: he was in a successful band which toured with superstars like the Rolling Stones and AC/DC. He was also married, and his wife Louise was expecting a baby. But when she went into premature labor, he thought his life was turned upside down.

From the beginning, the pregnancy was fraught with potential complications; originally, doctors thought Louise was suffering an ectopic pregnancy. While that turned out not to be the case, there was still concern that their baby may not survive. The day before the ultrasound which would reveal if their baby had a heartbeat, Neeson took a walk. “A lot of soul searching went on. I said out loud, ‘I need a sign’. At that point I was stopped dead in my tracks,” he said, in an interview with the BBC, explaining he had spotted a white feather. “In Ireland a white feather represents life.” Sure enough, their baby had a heartbeat the next day.

But then, at 27 weeks pregnant, Louise went into premature labor. Their son, Dabhog, weighed just 1lb, 120z, and had to be in the NICU for four months. “It was an unbelievably dark and troubled time,” he said. “For a large portion of that time we weren’t sure on a daily basis whether he was going to make it through.” And then, two weeks later, they found out that Dabhog had Down syndrome. “That was something else that just added to the whole very intense experience,” Neeson admitted.

Things were even harder because Neeson’s band, The Answer, was in the middle of recording an album. “I would have to take myself away from the incubator for 20 or 30 minutes and do interviews to promote the album,” he said. “I had to pretty much pretend I was in a place where I was comfortable releasing good time rock ‘n’ roll music. It was a complete collision course with where my head was actually at.”

What Neeson didn’t see coming was how Dabhog would change not only his life, but his music as well.

Dabhog ended up having surgery to repair a hole in his heart at the age of one, but otherwise, was able to come home after his time in the NICU, healthy and happy. Neeson said he realized he couldn’t keep writing the kind of music he had been writing, and decided to launch a solo project instead, which he worked on in Nashville. “The result was really a collection of songs that was so introspective and intense and so truthful that they really could only be part of a solo project,” he said. “It’s a world away from the stuff that I had spent my career making up till that point.”

The album was, in many ways, a tribute to Dabhog. The name of it, “White Feather,” referred back to the sign he got before hearing a heartbeat, and one of the songs, “Broken Wing,” was written as a tribute to his son. “It’s a good opportunity to talk about Down’s syndrome and normalise what Down’s syndrome is, but also to celebrate my son for being the individual that he is,” he said, adding that he wanted to show how powerful and unique an experience raising a child with a disability is, as well as to help other new parents of children with Down syndrome.

“I was kind of placing myself back in the hospital whenever we were told that Dabhog had Down’s syndrome and I was thinking that if I’d heard this song back then I might have taken some comfort from it,” he said. “If your child has Down’s syndrome that is not what defines your child. Your child is unique and amazing like every other child. I’ve never met a person like my son, Dabhog. The joy that he brings into our lives is something that I could not have anticipated when we were just worrying day to day about his health and getting him out of that hospital alive.”

Now, Dabhog is five and has a younger brother, and Neeson wouldn’t change a thing. “Just to be able to experience our little boy thriving like that and being so communicative and being such a life-affirming character and for him to bring so much joy into our lives, it’s a massively positive experience for us and we’re thankful for that,” Neeson said. “Before my wife became pregnant with Dabhog I suppose my sole focus in life was essentially myself and I think you become much less selfish when you have a child. There are moments in your life when you don’t know how you’re going to get past these obstacles that are set, but you do. Whenever you come out the other side there’s a real sense of victory and that’s where we are at now.”