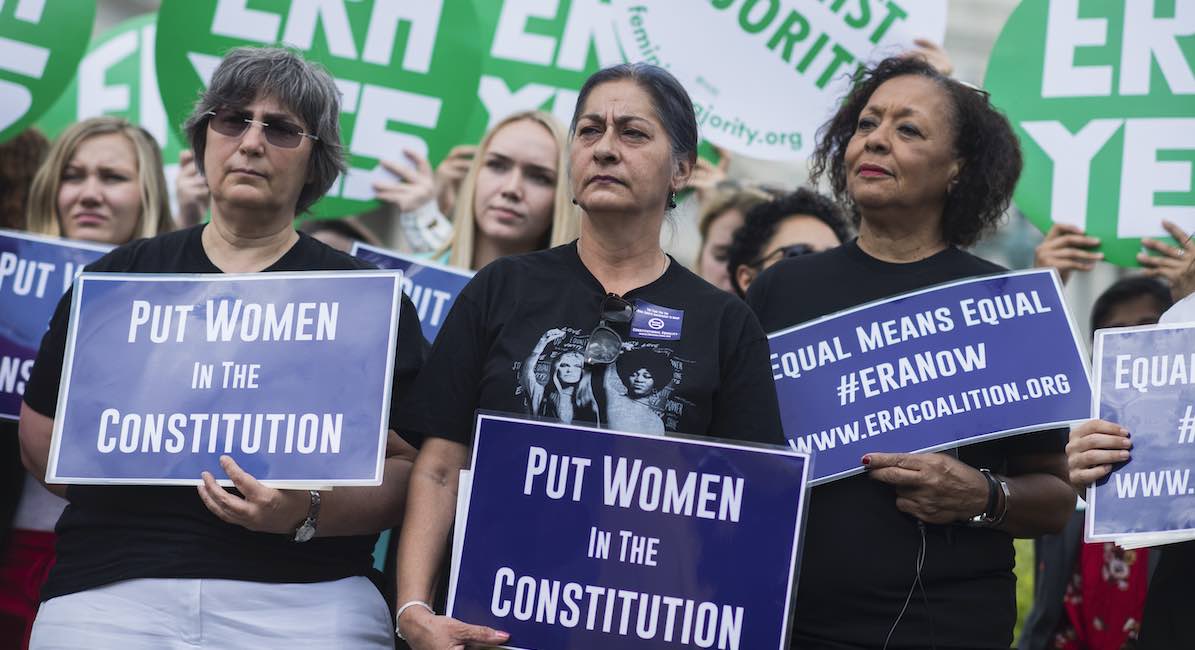 A federal judge ruled on March 5, 2021, that the deadline to ratify the Equal Rights Amendment (ERA) “expired long ago” and the recent attempts of three states to ratify the proposed amendment came too late. However, supporters of the ERA are now pushing to remove that deadline and allow the ERA to be added to the U.S. Constitution, ultimately empowering the abortion industry — not women.

The ERA states, “Equality of rights under the law shall not be denied or abridged by the United States or by any State on account of sex.” While this sounds as though women would be awarded more rights under the law, women stand to lose rights with the ERA. As Live Action News’ Kristi Burton Brown pointed out, “Equal rights are already part of our Constitution, as the 14th Amendment, enacted shortly after the Civil War, says that states may not ‘deny to any person within its jurisdiction the equal protection of the laws.'”

The ERA was originally proposed in 1972 and after passing both the House and Senate, states were given seven years to ratify it. According to CNN, three-fourths of the states (38) were required to ratify it in order to have the ERA added to the Consitution. The deadline was later extended to 1982, but by then just 35 states had ratified it and five of them had actually rescinded their support.

In January of 2020, shortly after Virginia became the 38th state to ratify the ERA, three attorneys general sued the archivist of the United States, saying he must “carry out his statutory duty” of certifying the ERA as the 28th Amendment to the Constitution. They argued that based on their ratifications of the ERA — though carried out decades after the 1982 deadline — the ERA must be added to the Constitution. Illinois and Nevada joined Virginia in that suit, arguing that they had not missed the deadline because the deadline was not stated in the body of the amendment.

Judge Rudolph Contrera wrote in his opinion that a ‘ratification deadline in a proposing resolution’s introduction is just as effective as one in the text of a proposed amendment.” Because the ratifications from Illinois, Nevada, and Virginia came after both the original and extended deadlines, he ruled that “the Archivist is not bound to record them as valid.” It is unclear if states are allowed to rescind their ratification, as five have done.

Now House abortion supporters are again attempting to enact the ERA with a proposal to remove the deadline from the amendment. They had previously attempted this just over a year ago. If all 38 ratifications are counted (despite the five rescinded ratifications), the path could be cleared for the ERA to be added to the Constitution.

In an opinion piece for USA Today, Mercedes Schlapp and Mary Vought explained why the ERA would actually be harmful to women:

…[T]he ERA would actually erode the rights of women recognized in state and federal law. By stating that “equality of rights under the law shall not be denied or abridged … on account of sex,” the amendment would supersede, and effectively eliminate, statutes designed to protect women.

From Title IX, which allows women the ability to compete in sports and earn athletic scholarships, to child support and alimony laws as well as Social Security benefits for surviving spouses, the ERA could be the downfall of many protections for women, said Schlapp and Vought.

In addition, the ERA would expand the taxpayer-funding of abortion and could make abortion a right in the Constitution. Because only women seek abortions, any government policy that was to restrict abortion would now be treating women differently than men — which goes against the ERA.

Case in point, New Mexico’s state Constitution includes an ERA of its own that states, “Equality of rights under the law shall not be denied on account of the sex of any person.” After the National Abortion and Reproductive Rights Action League (NARAL) and Planned Parenthood filed a lawsuit arguing that state’s ERA mandated state-funded abortion, the New Mexico Supreme Court sided with the pro-abortion groups and unanimously ruled that the state’s ban on tax-funded abortions “undoubtedly singles out for less favorable treatment a gender-linked condition that is unique to women.”

If the federal government is able to remove the ERA’s deadline and therefore add the ERA to the Constitution, this would be the future for all states in the U.S. Any abortion restriction could be viewed as a restriction on women and therefore, deemed unconstitutional.