On August 23, 2022, Noorie Malik, Yelp’s VP of User Operations, announced Yelp’s decision to slap warning labels on pro-life pregnancy centers (PRCs) online, claiming that PRCs are “misleading.” The move follows Yelp’s longtime public support for abortion and its recent decision to pay for employees’ abortion-related travel expenses. Yelp appears to at least partially have based its decision on an article published in 2018 in a pro-abortion journal. Though the authors claim to have no conflict of interest, each is involved with the abortion industry — none are impartial reviewers.

This move calls into question whether Yelp is acting at the urging of abortion industry power brokers, who have been vigorously attempting to censor and shut down all options for women except those which wholeheartedly endorse abortion on demand for any reason. In addition, this isn’t the first time that Yelp has tried to label pregnancy resource centers in such a way as to disparage their services.

But rather than disclose the results of their alleged “investigations,” Yelp instead linked to an article entitled, “Crisis Pregnancy Centers: Faith Centers Operating in Bad Faith,” as support for the idea that PRCs are “misleading.”

“While CPCs have a right to exist and can provide valued emotional, spiritual, and material (e.g., diapers and formula) support for some women, they often engage in practices that are dubious at best and unethical at worst,” the authors of that article claimed. 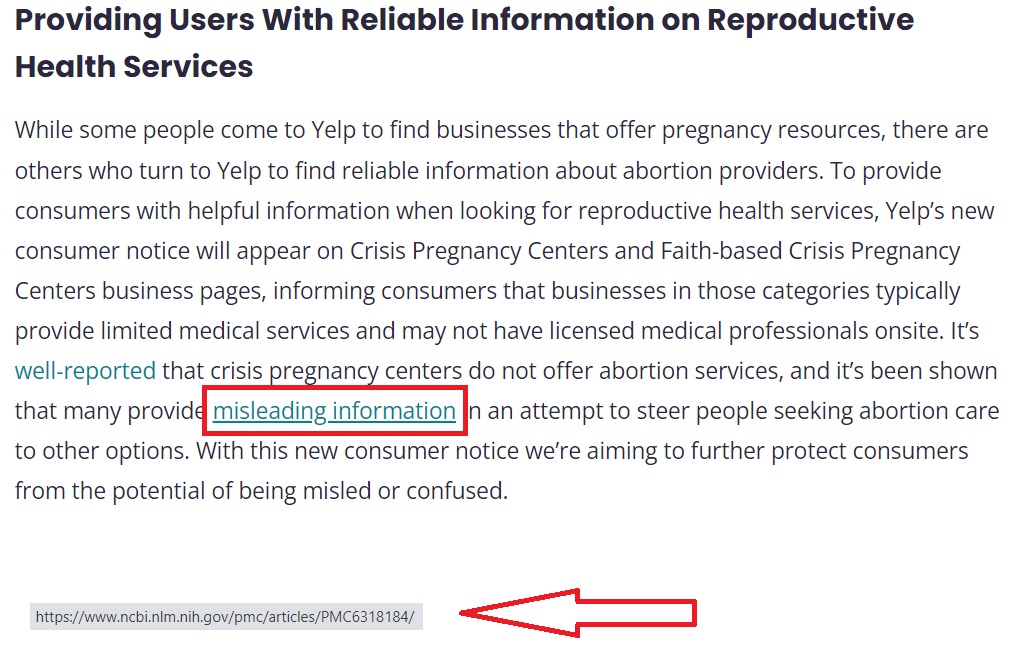 The article was published by the Journal of General Internal Medicine, the official journal of the Society of General Internal Medicine (SGIM). Online, SGIM claims to be a “member-based internal medical association of over 3,300 of the world’s leading academic general internists, who are dedicated to improving the access to care for all populations…”

The organization also supports abortion and recently reaffirmed its support for the radical Women’s Health Protection Act. In a 2021 letter, SGIM acknowledged that they opposed all abortion restrictions. SGIM also joined an amicus brief in favor of abortion in the Dobbs v. Jackson Women’s Health Organization Supreme Court case, which led to the overturning of Roe v. Wade.

Article authors claim no conflicts of interest, but pro-abortion bias is clear

One of the authors in the article linked by Yelp is Christine Dehlendorf, an abortionist who also trains medical professionals in abortion procedures. By her own admission, Dehlendorf provides “family planning care including abortions both at the Women’s Options Center at San Francisco General and at Planned Parenthood,” where she also purports to “train our family and community medicine residents in abortion care.”

Dehlendorf is also the director of the Person-Centered Reproductive Health Program at the Bixby Center, a known abortion training organization. Just last month, Dehlendorf wrote an op-ed where she again acknowledged that she provides abortions, adding, “My colleagues and I in family medicine have a particular role to play in this fight — to work to ensure patients have the option to receive this care as part of an ongoing relationship with a trusted provider.” 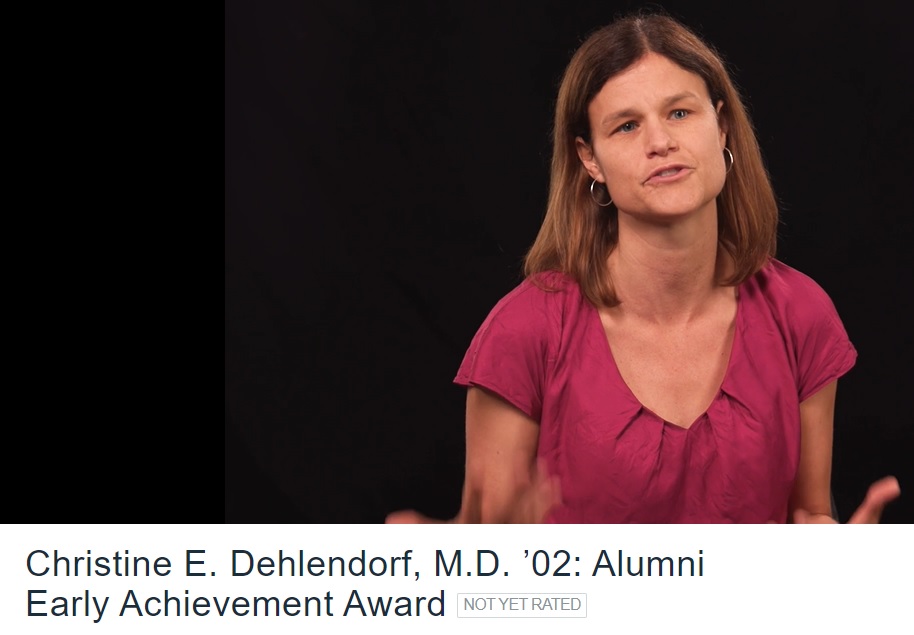 A second author of the article linked by Yelp is Sonya Borrero, M.D., who is on the Board of Trustees of the Women’s Law Project and is a former Secretary of the Board of Directors and current member of the Society of Family Planning (SFP), where she was awarded SFP’s Beacon of Science Award in 2020. SFP is heavily funded by the Packard and Buffett Foundations, original investors in abortion pill manufacturer Danco Laboratories.

Notably, SFP recently granted funds for a study that gave gift cards to recruited abortion patients who claim to have visited what they “believed” to be pro-life pregnancy centers prior to their abortions. SFP also provided funding in 2019 to conduct a “national mystery caller study” of pregnancy resource centers, where callers posed as a “simulated patient.”

The third author is Susan Frietsche, an ACLU attorney who provides legal services for abortion facilities as well as abortion clients. According to her bio at the Women’s Law Project (WLP), Frietsche is a “Senior Staff Attorney and the founder and director of the Western Pennsylvania Office of the Women’s Law Project, where she has worked since 1992. Her law practice focuses on providing legal services for the 17 freestanding abortion facilities in Pennsylvania…”

Her bio goes on to state, “Frietsche has appeared as counsel for young women seeking confidential abortions in over 50 judicial bypass cases…”

It also states that “She is a member of the adjunct faculty of the University of Pittsburgh School of Law, where she teaches Reproductive Law and Policy and Gender and the Law. Prior to joining the staff of the Women’s Law Project, Frietsche was the Deputy Director of the Pennsylvania ACLU and the organization’s state lobbyist.” 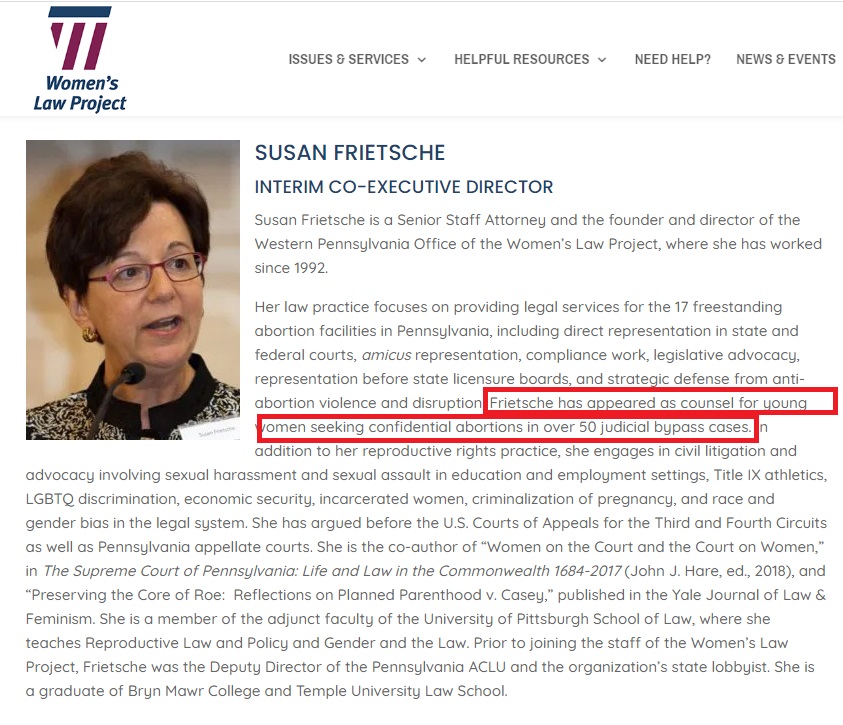 The Women’s Law Project, which does not disclose two of their largest donors, is behind a brief published in collaboration with another pro-abortion group called The Alliance. The report, originally released in 2021, falsely attacks pro-life pregnancy centers and was also authored by extremely biased abortion advocates.

Responding to Yelp’s announcement, Andrea Trudden, Vice President of Communications & Marketing at Heartbeat International, told the National Catholic Register (NCR) that for the sake of full transparency, Yelp needs to disclose where they obtained the list of pregnancy help organizations.

Abortion Access Front has previously tweeted to supporters (multiple times) that they should leave false Yelp reviews about PRCs and even recently published an activity guide suggesting supporters “upvote” these reviews.

Just a month ago, Yelp had to alert users to “unusual activity” on PRC listings because of pro-abortion efforts to leave false reviews about the pregnancy centers. 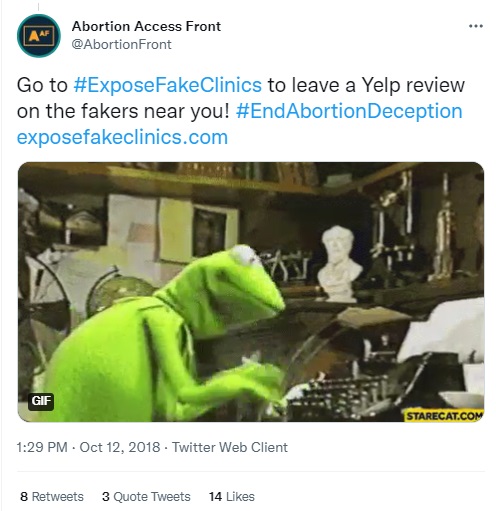 “We are witnessing a full-scale attack against any person and/or foundation that seeks to support alternatives to abortion,” Heartbeat International’s Andrea Trudden previously told Live Action News. “Every woman deserves compassion and care when facing an unexpected pregnancy and that is exactly what pregnancy help organizations provide day in and day out. Showing support for pregnant women in need is the right thing to do.”