University of New Mexico Health Science Center (UNMHSC) pediatrician Dr. Robin Ohls, made infamous by headlines over her work with aborted baby brains, is currently on suspension. The Albuquerque Journal reports that Ohls’ research has been suspended “while investigating her transfer of human tissue to a private company and whether she had the proper approvals for any underlying study, internal documents show.” And UNMHSC also says that their entire fetal tissue research program is currently on hold. 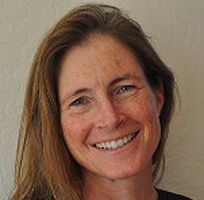 Officials suspended Dr. Robin Ohls’ research duties and barred her from her lab in October after learning she had acquired fetal tissue for months from the Southwestern Women’s Options abortion clinic and transferred it to a private company in Michigan, according to an internal memo obtained by the Journal.

UNM Health Sciences Center staff discovered the practice when Ohls asked if the company could reimburse the university to help cover her lab assistant’s salary, since the assistant had spent time preparing the samples for transport, the memo states.

UNM Health Services says it can’t comment any further, but said, “…research must be conducted according to the highest ethical and legal standards.” UNM says at this point no other fetal tissue research is happening at the Health Sciences Center now that this professor’s research has been put on hold.

Controversy is nothing new for UNMHSC and its fetal tissue program. Live Action News first reported on Dr. Robin Ohls in the summer of 2016. The House Select Panel on Infant Lives’ investigation of fetal tissue practices targeted UNM and its medical facility, among others, after receiving mounds of internal documents and evidence. That story, “Nightmare lab: University pediatrician builds career on baby parts research,” has the background on Ohls and her connections to using fetal tissue in her research lab. 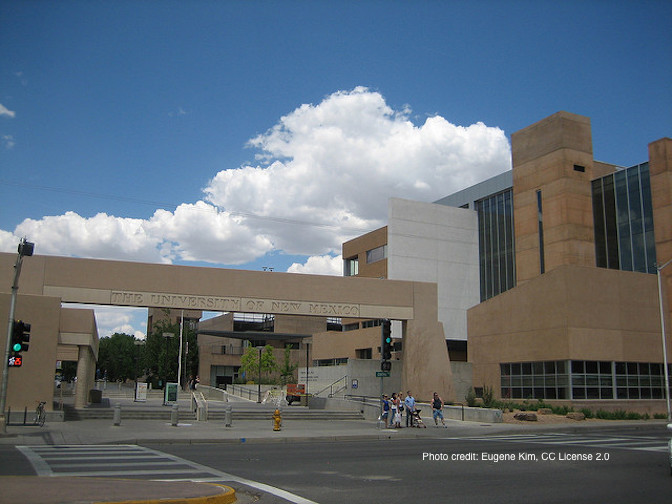 This suspension, which apparently happened in October but was kept under wraps, specifically involves Ohls’ dealings with the Zietchick Research Institute (ZRI), which the Albuquerque Journal reports is a one-person operation, founded and run by Dr. Tammy Movsas. ZRI’s website says it is “the only vision research center in the world focused on optimizing maternal/infant eye health by developing new treatments for eye disorders that affect both infants and pregnant women. Dr. Tammy Z Movsas’ (ZRI’s founder) background in pediatric ophthalmology and maternal/child epidemiology helped spark the novel idea that pregnancy-related hormones can affect the development of the infant eye as well as contribute to eye problems encountered during pregnancy.” The Institute was founded in 2012.

It is this organization’s connection to Ohls that triggered Ohls’ suspension. The Journal cites the contents of a confidential memo, which was written to the UNM Board of Regents by Dr. Paul Roth, HSC chancellor, and Elsa Cole, university counsel, outlining the concerns about Ohls from UNMHSC:

HSC staff was concerned that: 1) an issue was being raised that would potentially infringe on the University’s policy to not buy or sell human tissue, and 2) appropriate research compliance approvals and processes protocols had not been followed,” the memo states.

This issue arose when Ohls asked for money to pay her lab assistant for preparing the samples for transport. The paper reports:

HSC staff relayed their concerns about Ohls’ research to Larson, who immediately ordered an investigation, the memo states. Roth and the chairs of HSC’s Human Research and Rights Committee and its Human Tissue Oversight Committee were also apprised.

Roth ultimately suspended all Ohls’ research duties “and barred her from access to her lab pending completion of this investigation,” the memo said.

Where do the eyes come from?

ZRI is focused on eye health, and Ohls has conducted research on aborted baby eyes in the past. This highlighted research article, posted by NMAFL, is authored by Ohls and other academic and medical researchers and details the study they did on fetal eyes.

This study is cited by the House Select Panel in its criminal referral, issued to New Mexico Attorney General Hector Balderas in June of 2016. 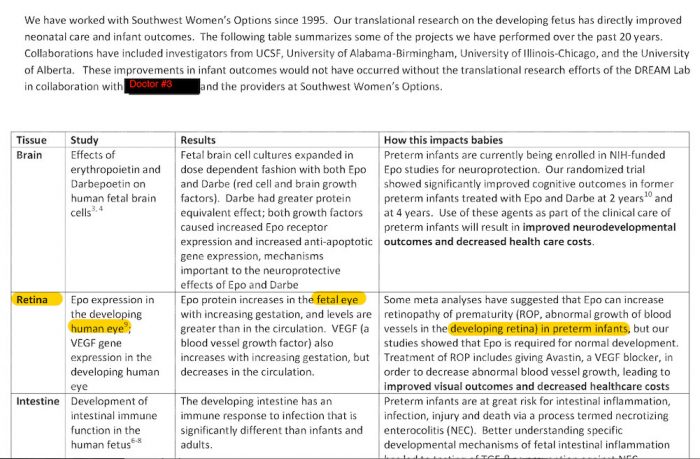 The “Doctor #3” cited here has been previously identified as late-term abortionist Curtis Boyd, who had already indicated his support and work with Dr. Ohls, as evidenced by this letter obtained by NMAFL and also cited in the House Select Panel’s referral to Balderas. 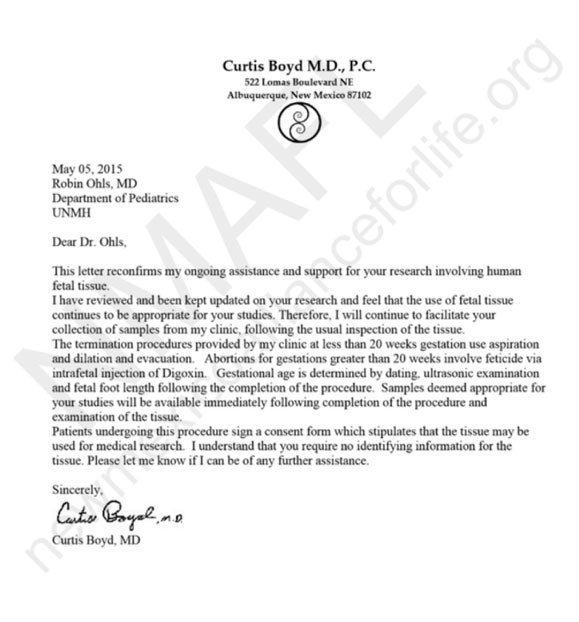 Boyd’s Southwestern Women’s Options facilities commit abortions even into the third trimester using the induction method of abortion, which is usually committed at 25 weeks gestation or later:

Previously, UNMHSC has reported that the only place from which the university receives fetal tissue is the Southwestern Women’s Options (SWO) abortion facility run by Boyd, as reported by UNMHSC to the House Select Panel in response to its questions. 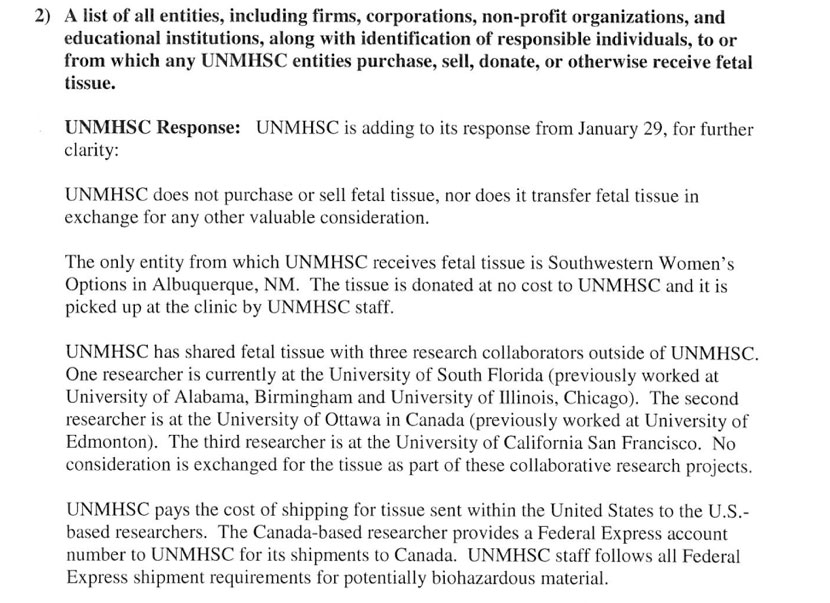 Back in Michigan at ZRI, there’s a need for aborted baby eyes; however, ZRI is a private company, and that’s where Ohls is being investigated for crossing the line from public non-profit research. Thus, the chain might look like this: A woman seeks an abortion and signs a “consent form” for her aborted baby to be used in medical research; the baby is sent to Dr. Ohls and her lab; Dr. Ohls’ lab assistant transfers the eyes of the baby to ZRI where Movsas can do further research for her own publications. If money exchanged hands here, then federal law has been violated, and that’s what UNMHSC is seeking to find, and the reason for the suspension, as reported by the Albuquerque Journal.

One troubling aspect of the UNMHSC case has been the consent form that women sign. In the copy of this complaint by Jessica Duran, a post-abortive woman who was stunned to find out how her aborted baby was being used, it’s clear that the wording (see the second to the last page) does not lead a woman to understand the depths of the research that might be conducted on her baby when she aborts. With that being the case, and a pending lawsuit added to the mix, if Ohls’ lab is then transferring aborted babies to other researchers, the problem is compounded further. Perhaps UNMHSC has seen that already. 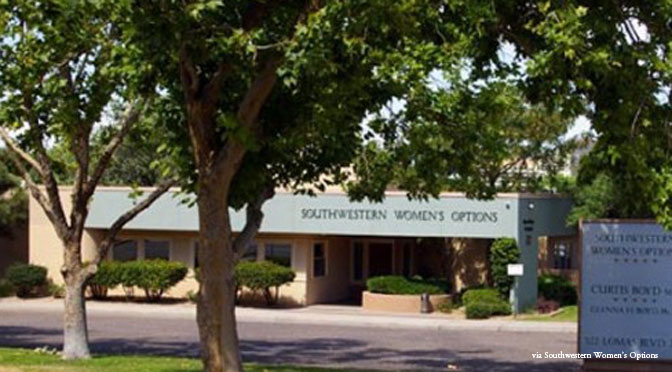 It hasn’t gone unnoticed that this news broke the day after New Mexico AG Balderas said he would not respond to the federal criminal referral by investigating the university. As Live Action News reported Friday, the attorney general claims to have found no evidence of wrongdoing. The Associated Press reported:

The New Mexico Attorney General’s Office outlined its findings Thursday in a letter to members of a special U.S. congressional committee created to investigate Planned Parenthood and the world of fetal tissue research.

The committee forwarded allegations to Attorney General Hector Balderas’ office in 2016. The committee accused tissue procurement firms and research entities like the university of possibly violating federal and state laws.

Balderas’ office conducted civil and criminal reviews but found no evidence to indicate any state violations.

But on the ground in New Mexico, Elisa Martinez, executive director of the New Mexico Alliance for Life (NMAFL), who has been instrumental in helping the investigation into the aborted fetal market taking place in her back yard, cried foul:

This is a pathetic attempt by Hector Balderas to hide his malpractice as the Attorney General, in failing to prosecute over 100 viable cases within the statute of limitations. We already have a New Mexico District Court stating these same civil cases he failed to prosecute are indeed viable and prosecutable, based on the evidence on its face in violation of NM statute. It is shameful and disgusting that he isn’t prosecuting the law on behalf of New Mexico women and by not even bothering to contact the victims, he chose to trust the lawbreakers over trusting women.

The sentiment was echoed by attorney Michael Seibel, who is representing New Mexico victims suing Southwestern Women’s Options in NM District Court. “I don’t know a single attorney who would issue a non-prosecution letter without talking to the victim, investigating the facts, or indicting a single person, what Hector Balderas did is not justice but rather protecting political special interests,” Seibel said.

Seibel indicated that Duran had never been contacted by the attorney general’s office, adding his astonishment at the way the news came out, as he told KRQE:

This lady was suspended and barred from her lab in October according to reports and we’re just finding out about it now through some sort of internal leak?

Martinez told Live Action News on Friday that she was thankful for this news:

This is a tremendous pro-life victory, we are grateful that our work helped bring about accountability and the shutting down of yet another abortion-related program at UNM. We will continue to look further into these new violations surrounding Dr. Ohls. I can confirm that Ohls has been particpating in research using aborted infant body parts for over 20 years, and because of this, should be fully aware of the laws and regulations. There must be greater accountability across UNM HSC, starting with the Chancellor Paul Roth, who proudly admitted fetal brains were used to dissect with summer camp students. These abuses of human rights need to immediately end, and we will ensure that, despite our state Attorney General’s failure to prosecute, the FBI and DOJ are involved in these issues.

Indeed, Roth, who was instrumental in Ohls’ suspension, had been her biggest defender in letters to the congressional panel (See NMAFL’s original copy, reflected on pages 227-230 of the criminal referral documents with Roth’s name redacted). As Live Action News reported in the summer of 2016:

Roth’s letter to New Mexico legislators is only one of a series of defenses he has made, attempting to further justify the work of his university in funding abortion, blurring ethical lines, and profiting off of the deaths of babies, including those in the third trimester.

All of the studies Roth cites as important are ones in which Ohls and colleagues purported to find cures for afflictions that babies face, but lost in translation is the fact that preborn babies, some viable, were deliberately killed, allowing the lab experimentation to continue. Ohls has fostered an illustrious career from the tissue and body parts of aborted babies.

Now, for whatever reason, Roth and other UNMHSC officials have launched the investigation that should have been launched years ago, and the horrors of experimenting on baby brains and eyeballs have, at least temporarily, ceased. Balderas has done an injustice to the people of his state by turning his head on the facts and choosing not to interview witnesses to the events, like Duran. Now the U.S. Department of Justice has it in its hands, as does the university.

While the story has been reported in the New York Times and San Francisco Chronicle, among other outlets, there have been no comments from Ohls or ZRI’s Movsas. The university has simply confirmed the investigation and said it cannot comment further and “compromise the integrity of the investigative process.”

NMAFL and pro-lifers everywhere hope that ethics and integrity will finally prevail in this case of the “nightmare lab.”