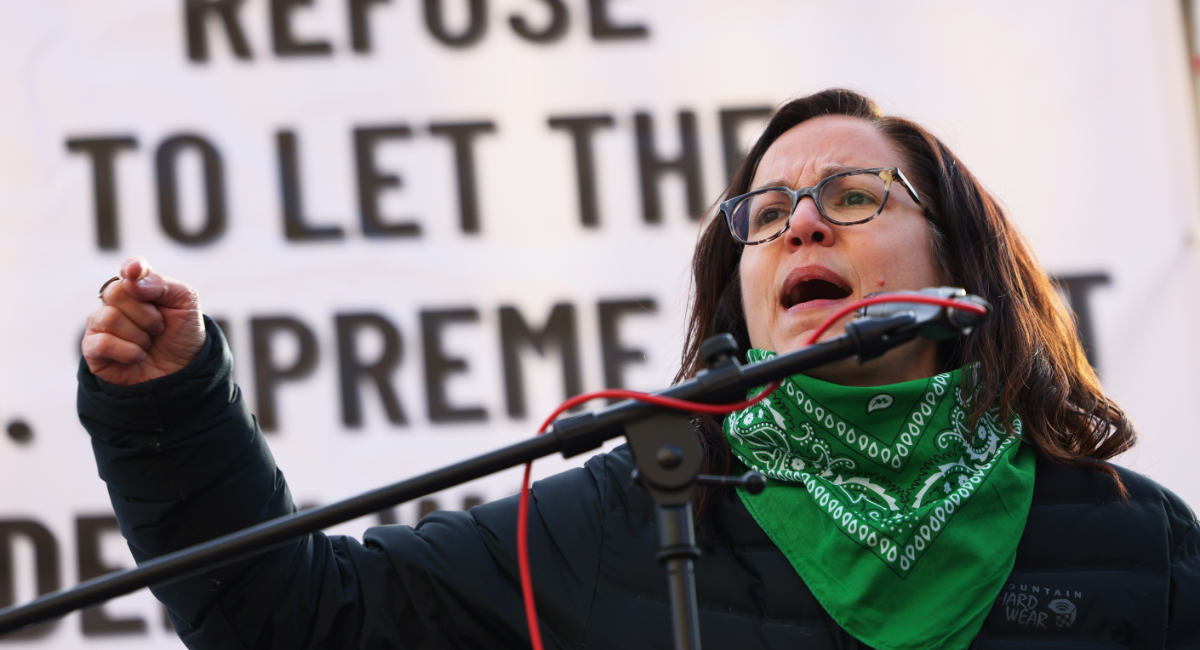 Pro-abortion disruption is being unleashed in churches, malls, sports stadiums and public areas by the radical RiseUp4AbortionRights group, with the latest target a Church in Detroit, Michigan. As previously reported by Live Action News, naked Riseup4AbortionRights activists disrupted Sunday Mass at the St. Veronica Parish in Eastpointe on June 12, shouting, “Overturn Roe? Hell no,” “Abortion on Demand Without Apology,” and “Overturn Roe.” Congregants responded by countering, “Abortion kills babies.”

A video of the disruption was uploaded by the group, as well as Refuse Fascism Ohio. The incident followed multiple disruptions at Catholic churches on Mother’s Day in May, as well as a disruption event at Joel Osteen’s Lakewood Church in Houston, Texas.

Live Action News previously documented that while RiseUp4AbortionRights was launched in January 2022, its really is a rebranded version of the revolutionary pro-abortion group, Stop Patriarchy, which is led by activists Sunsara Taylor, Lori Sokol, as well as millionaire abortionist Merle Hoffman.

Taylor, who has cheered the disruptions, is a follower of modern communist “architect” Bob Avakian, who, according to Newsmax, is a veteran of the 1960’s group “Students for a Democratic Society (SDS)” and is a “lifelong Maoist.” Newsmax also claims he is “friends” with Bill Ayers, a member of the Weather Underground who signed Stop Patriarchy’s petition against Texas abortion law, HB2. Taylor, Avakian and their cult refer to Christians as “fascists” and message that “Forced Birth or Forced Motherhood” (seen recently spray painted on various pro-life centers) means “female enslavement.”

The group, whose motto is also “Abortion On Demand & Without Apology!”, is typically identified by wearing the Green Bandana of abortion rights, claiming on their website, “Green is the color worn by millions of women in Argentina, Colombia, and other countries to express their fierce determination to legalize abortion. We are inspired by their example!”

They have recently attempted to rally supporters to come to the Supreme Court, vowing to block the street to protest the expected decision by the Court to overturn the infamous Roe v. Wade decision. 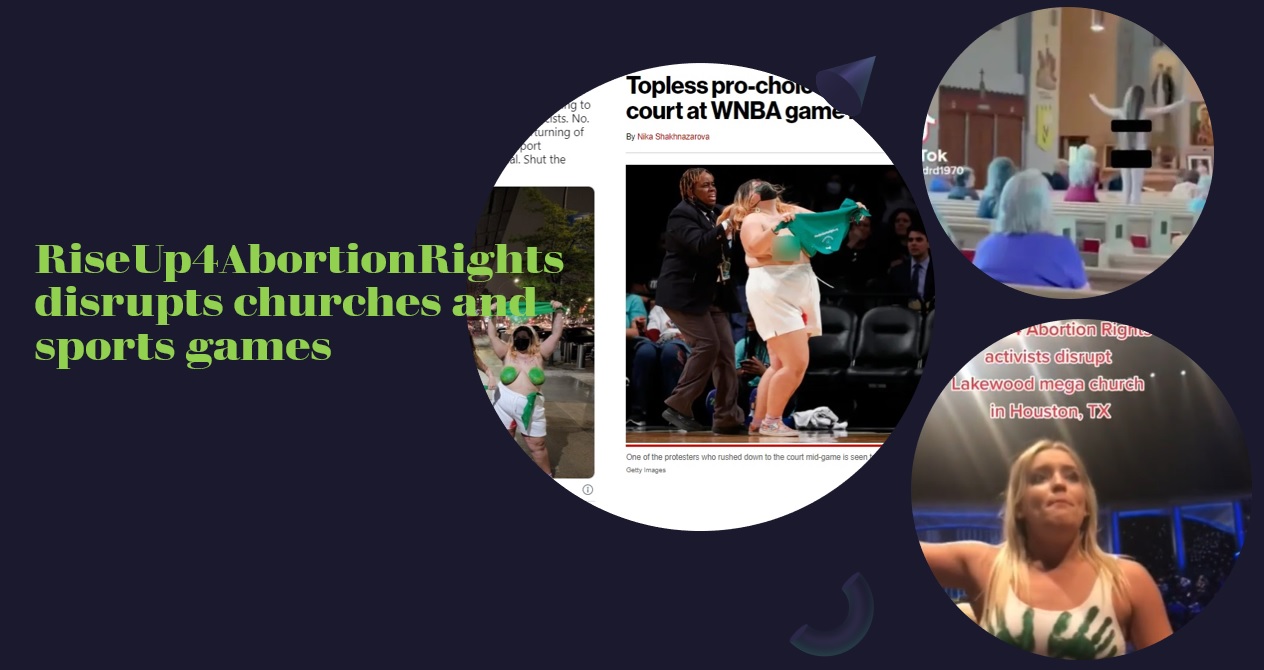 June 21: Abortion activists from RiseUp4AbortionRights (identified by their green bandannas) again handcuffed themselves to the fence surrounding the Supreme Court. The civil disobedience took place as Americans were awaiting a decision in the Dobbs v Jackson Women’s Health Organization case June 21,2022, which, according to a leaked opinion may overturn Roe v Wade.

Katie Barlow, a social media director for SCOTUS Blog, tweeted, “Two pro-choice protesters have hopped the short fence and handcuffed themselves to the taller fence outside the Supreme Court,” adding in a separate tweet, “Officers have clipped the cuffs one one protester and removed him. @fox5dc”

The group openly claims, “It’s not enough to be pro-choice, we must wage visable, disruptive, mass, nonviolent resistance. They also claim, “We will NOT allow the Supreme Court to overturn Roe.”

June 18:  RiseUp4AbortionRights ,which openly claims, “It’s not enough to be pro-choice, we must wage visable, disruptive, mass, nonviolent resistance,” conducted a baby doll disruption at Supreme Court Justice Amy Coney Barrett’s home, even recruiting teenaged girls to participate. They also claim, “We will NOT allow the Supreme Court to overturn Roe.”

“Children forced to give birth to children! Women will be inferior! ALL OF U WHO ARE PRO CHOICE. Come to DC & stay!”#RiseUp4AbortionRight
pic.twitter.com/ARhwVoSyWL

June 10, 2022: RiseUp4AbortionRights activists conducted a “die in” at Bellevue Square Mall in Washington. They also unrolled a large banner at Progressive Field in Cleveland which read “Overturn Roe? Hell no!” during the Cleveland Guardians baseball game.

June 9, 2022: A RiseUp4AbortionRights activist chained herself to a fence at the Summit of the Americas; others protested in the streets.

June 8, 2022: A topless RiseUp4AbortionRights activist ran onto the court at a WNBA Basketball game between the New York Liberty and the Minnesota Lynx at Barclays Center.

Protestors at Barclays being dragged past Ben Simmons at my first WNBA game was a vibe pic.twitter.com/GbOhQz4txE

June 6, 2022: RiseUp4AbortionRights activists walked through a Macy’s department store yelling, “Get in the streets, stay in the street. Shut sh** Down!” The same day, an activist chained himself to the fence erected around the Supreme Court.

June 5, 2022: RiseUp4AbortionRights activists unfurled a large banner during the LA Dodgers’ game against the New York Mets. That same day, activists stormed services at Joel Osteen’s Lakewood Church in Houston, Texas. In addition, a group of abortion supporters holding RiseUp4AbortionRights posters threatening to “Shut it Down” allegedly blocked the street in front of Chase Arena as the Warriors-Celtics game began, according to multiple tweets from @ProtestPix.

June 4, 2022: RiseUp4AbortionRights activists attempted to disrupt priestly ordinations at the Cathedral of St. Mary of the Assumption in San Francisco.

May 26, 2022: RiseUp4AbortionRights called supporters to a national “SHUT IT DOWN!” protest. The group recently tweeted, “SCOTUS Is on track to overturn Roe within weeks. This must be STOPPED & IT CAN BE STOPPED! But only if we show that we’ll bring society to a HALT before we let them take away abortion rights.”

Editor’s Note: This post will continue to be updated as needed.