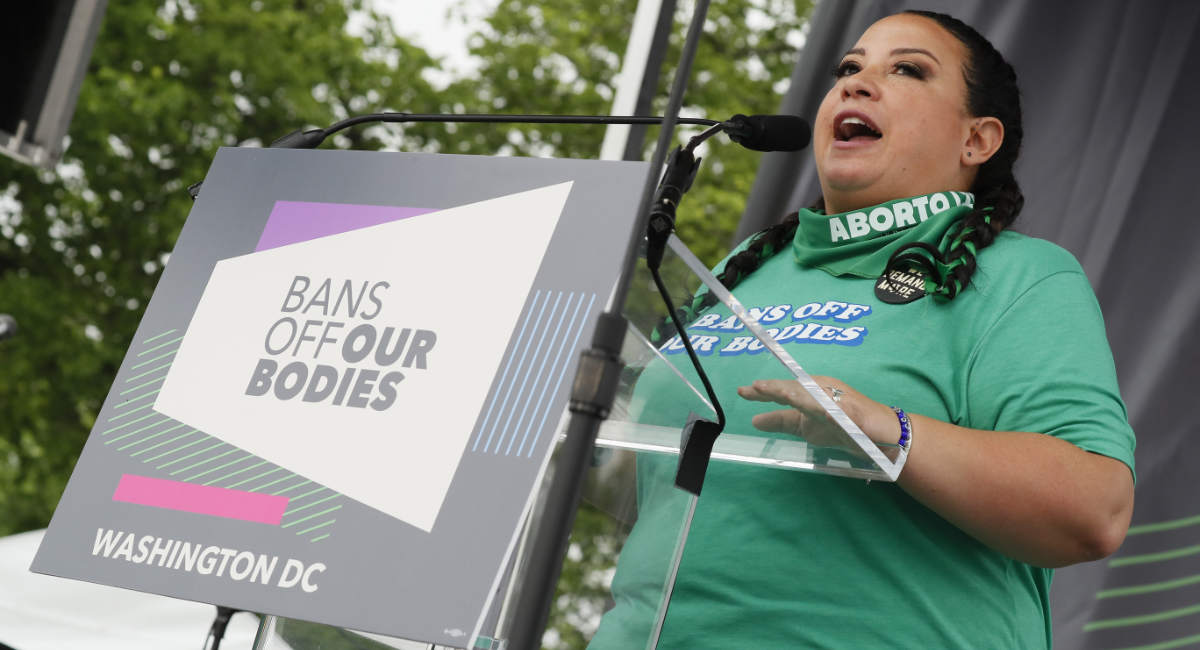 Pro-abortion rhetoric has intensified following the leaked Supreme Court draft opinion that appears to overturn Roe v. Wade, the 1973 Supreme Court decision which decriminalized abortion in every state of the country. Since then, abortion activists have vowed to become “ungovernable,” with some planning “revenge” and “revolution.” Others have announced plans for a “summer of rage” to counter what they believe to be the fall of Roe. The move comes on the heels of multiple acts of violence directed at pro-life offices across the country, fueled in part by violent rhetoric.

Merriam Webster Dictionary defines ungovernable as “not capable of being governed, guided, or restrained,” so it was no accident that this word was repeated and chanted during the May 14 abortion protest in D.C., as part of the Bans off Our Bodies protest organized by Planned Parenthood and other activist groups.

Speaking to a crowd of abortion activists in D.C. on May 14, Rachel O’Leary Carmona, Executive Director of the Women’s March shouted “ungovernable” as she told the crowd she was “angry” and lobbed a host of false accusations against the Conservative Justices on the Court. Even describing the Court as “illegitimate.”

“We won’t go back,” she chanted over and over. “Women will fight back as we always have and meet this moment – we will be UNGOVERNABLE until this Government starts working for us. UNGOVERNABLE!”

“Its why today isn’t just one day of action – it is simply day one of an invigorated movement aligned behind one simple demand… Keep your bans off our bodies,” the Women’s March leader added. “Today is Day one of an uprising to protect abortion rights. It is Day one of our feminist future and it is Day one of a Summer of Rage where we will be UNGOVERNABLE! Ungovernable. And we will not stop….” (emphasis added)

The Women’s March has even made merchandise featuring this term and is selling it in their shop.

“Summer of Rage”
Merriam Webster Dictionary defines rage as “violent and uncontrolled anger” or “violent action” as well as “an intense feeling.” On May 14, the Women’s March announced the “Summer of Rage” on Twitter.

“Our Summer of Rage is officially beginning. We’re prepared to rage for Roe all summer, culminating in a Women’s Convention in Houston, Texas. We won’t rest until abortion rights are protected,” the group tweeted. They plan to culminate their protests at a convention in Houston, Texas, on August 12-14. This location may have been chosen for its symbolism; in 1977, pro-life and pro-abortion activists organized in Houston shortly after Roe. 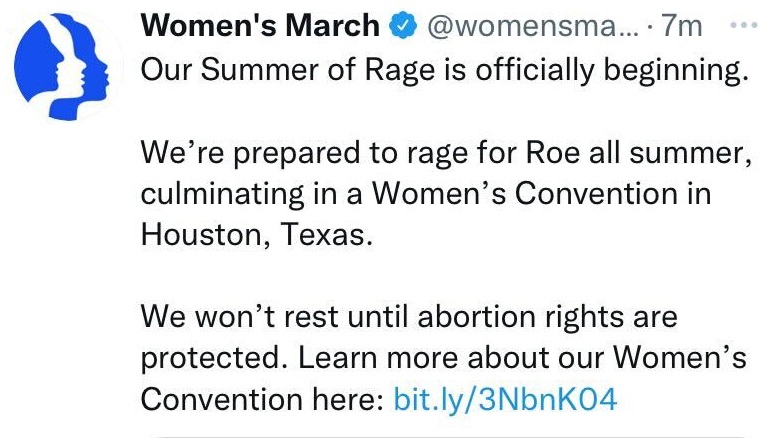 Use of the word “rage” for protesting is not new and dates back to the turbulent 1960s and 70s during the height of the Vietnam protests when student groups took to the streets. Among them was a group called the Students for a Democratic Society (SDS) and branching off from them was a violent group called the Weather Underground. Members of that group referred to themselves as “Weathermen.” According to WTTW, they “felt that the more peaceful tactics of other factions of SDS were not achieving results.”

According to Bryan Burrough, who authored the book Days of Rage: America’s Radical Underground, The FBI and the Forgotten Age of Revolutionary Violence, the Weather Underground’s mark was the bombing of buildings. The group was a “spin-off of the dominant white protest group the Students for a Democratic Society and in January 1970 the leadership of that group went underground with the intent of triggering this second American Revolution.”

The first “Days of Rage” were organized by Bill Ayers, a member of the Weather Underground, who recently told WTTW that “We felt that we ought to call a demonstration in which we weren’t contained and controlled.”

Important to note that Ayers and others in these radical groups are now teaching at various universities. 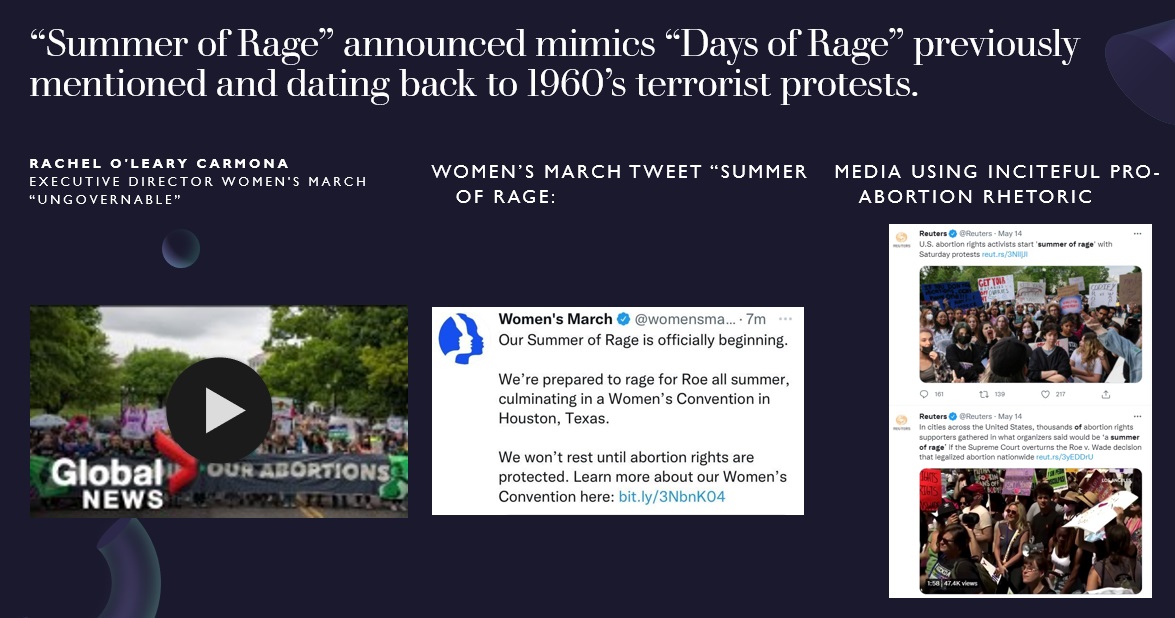 The concept of an “abortion revolution” has been percolating for some time in radical abortion groups such as the self-described revolutionary group Stop Patriarchy, led by activist Sunsara Taylor. Stop Patriarchy is a radical communist group known for targeting churches and aggressively confronting pro-lifers. Taylor is also a co-founder of RiseUp4AbortionRights and co-host of The RNL—Revolution, Nothing Less!—Show.

In addition, Taylor is a follower of modern communist “architect” Bob Avakian, who, according to Newsmax, is a veteran of the 1960’s group “Students for a Democratic Society (SDS)” and is a “lifelong Maoist.” Newsmax also claims he is “friends” with Bill Ayers, a member of the Weather Underground who signed Stop Patriarchy’s petition against Texas abortion law, HB2. 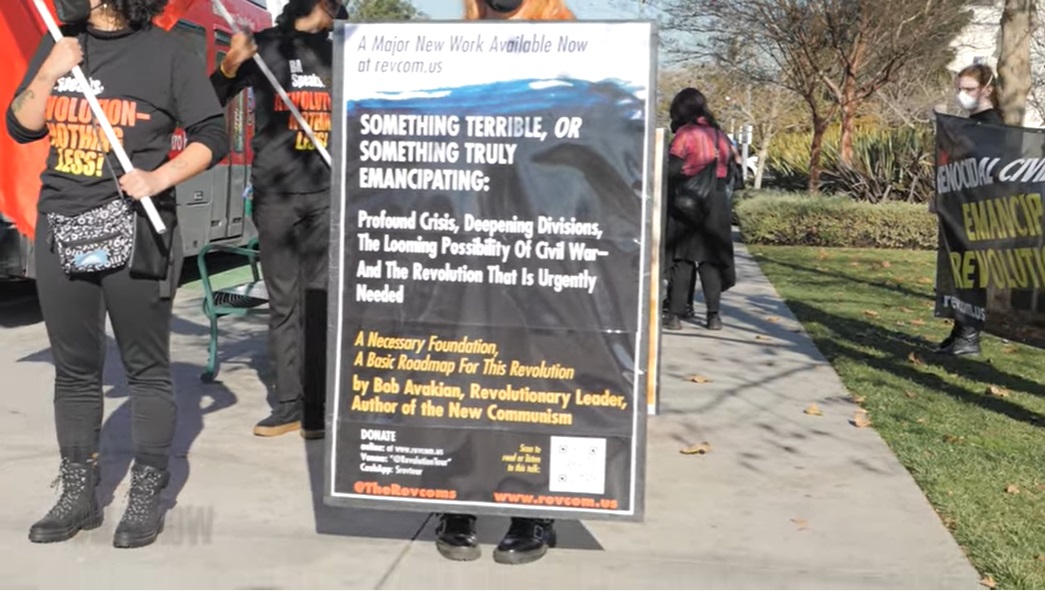 We can also see glimpses of this language arising during the May 14 protests. A UCLA pro-abortion organization claiming they wanted to “Abolish the Supreme Court” held a sign that read, “Women’s liberation through Socialist Revolution.” Another group referred to fellow supporters as “Comrades,” tweeting, “We must fight back with revolutionary struggle!”

“There’s a lot of other woke idiocy that distracts from and makes excuses for not waging the fight that is necessary — and the revcoms, which I am a part of, have taken most of this on at our website revcom.us, and others involved in the RiseUp4AbortionRights.org movement have done so in other ways,” Sunsara Taylor recently stated. “Ending all this will require an actual revolution — the overthrow of this system.”

The “first communique” from the anonymous group “Jane’s Revenge” published on May 10th vowed to “adopt increasingly extreme tactics to maintain freedom over our own bodies” while demanding the “disbanding of all anti-choice establishments, fake clinics, and violent anti-choice groups within the next thirty days.”

The group claims that if their demands are not met, they will be “forced to adopt the minimum military requirement for a political struggle.” Like the groups led by Sunsara Taylor, Jane’s Revenge also claims that the overturning of Roe will result in female “servitude.”

The group recently took responsibility for a May 8 act of terrorism against the Wisconsin Family Action office in which an arsonist threw Molotov cocktails into the facility. According to a police report the homemade devices “did not ignite.” However, the vandals lit a fire on the property and spray painted a warning on the outside of the building: “If abortions aren’t safe then you aren’t either.” 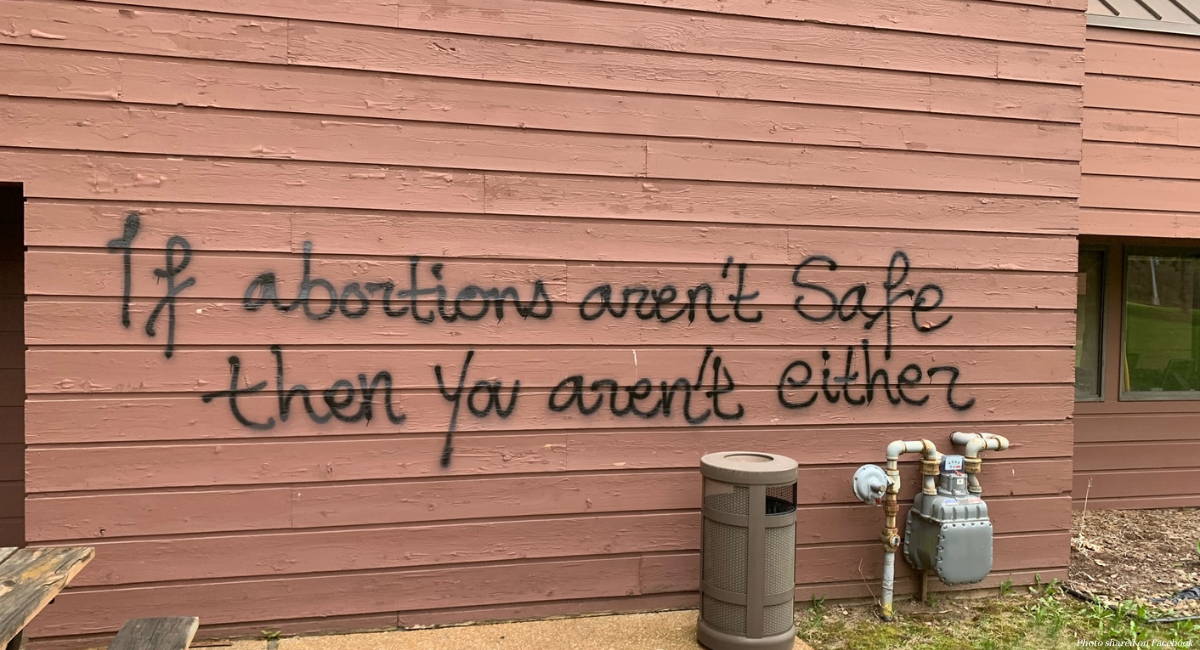 Local station WMTV reported that “Jane’s Revenge” was taking credit for the firebombing, writing, “Jane’s Revenge went on to threaten increasingly violent attacks that extend beyond the Wisconsin capital, if its demands are not met, writing, ‘Wisconsin is the first flashpoint, but we are all over the US, and we will issue no further warnings.’”

The words “Jane’s Revenge” has since been tagged in a series of vandalism, including a pro-life pregnancy center, seen across the State of Maryland. Wisconsin Family Action has since received multiple hate-filled messages. One message stated, “I hope you all burn with it… that’s what you deserve.” 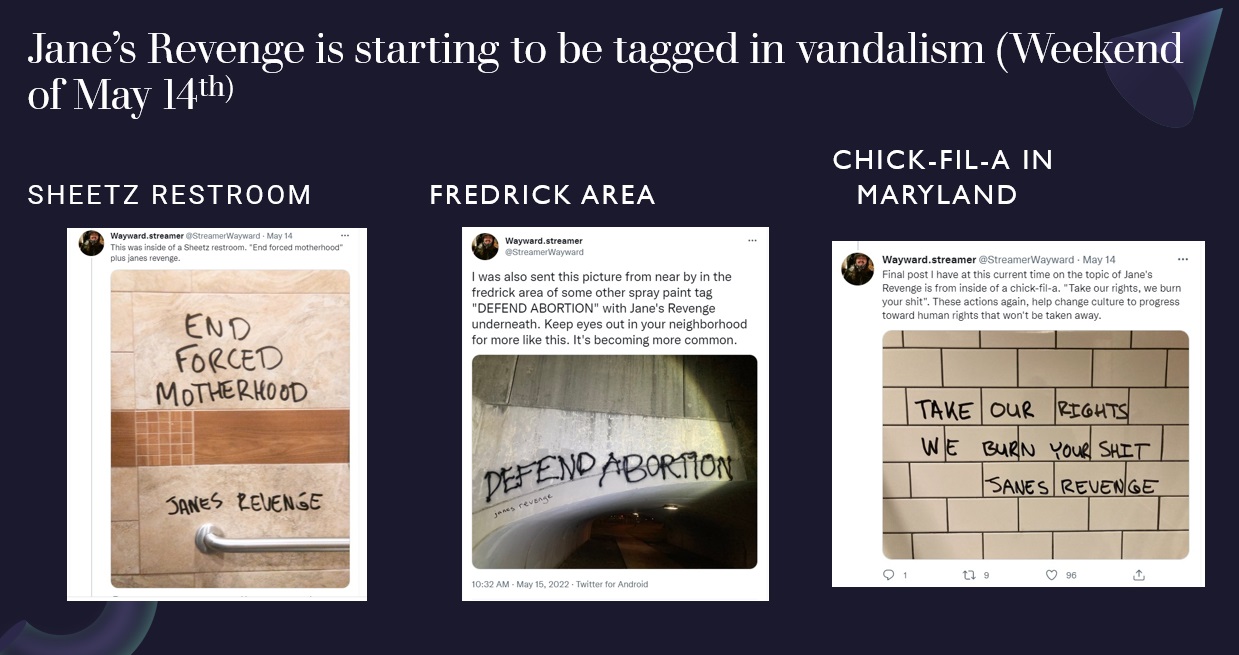 While we may not know whether pro-abortion rhetoric is merely being used to rally protests or if anyone is intentionally inciting violence, we know for a fact that violence is occurring. Whether law enforcement will take threats of violence seriously remains to be seen.