The shocking move to “expand” abortion for any reason up to birth now being pushed in Virginia, New York, and Vermont did not occur in a vacuum. It has been part of an organized plan spearheaded by abortion insiders, including the largest chain of abortion facilities in the nation, Planned Parenthood. Support for measures to remove abortion from all state criminal codes will ensure a large windfall for the abortion industry especially in states that already force taxpayers to fund abortion. Taxpayer funding of abortion is one of Planned Parenthood’s goals.

Planned Parenthood proudly endorsed New York’s move to repeal all restrictions in New York’s criminal code, enabling abortions past viability for even reasons of emotional or familial “health.” PPNYC Action Fund said the passage of the Reproductive Health Act meant New York could “finally grow to be a model of what sexual and reproductive health care should be….” Read that again. PPNYC Action Fund believes New York’s extreme abortion law that caused widespread outrage is the ideal. 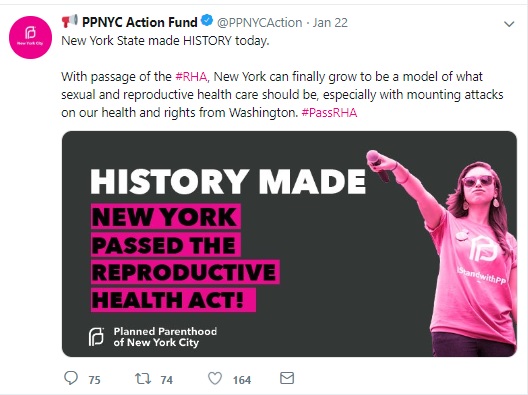 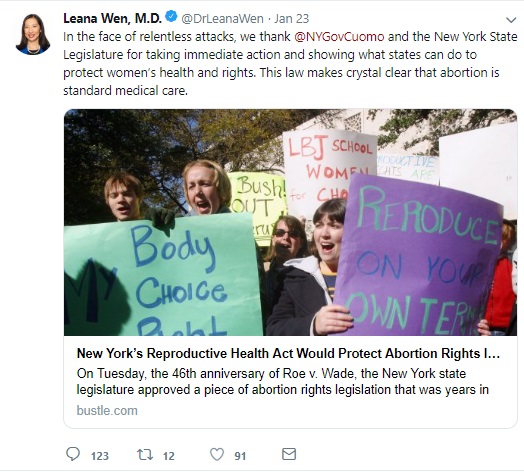 So, it was no surprise that the largest abortion corporation in the nation would also support Virginia’s move to permit unfettered abortion for all months of pregnancy in the state, via HB2491, sponsored by Del. Kathy Tran. Tran was clear that the bill would allow a woman to obtain an abortion up to the time she gives birth:

Planned Parenthood poured large sums of money into recent elections in Virginia to guarantee that friendly and radically pro-abortion advocates, including Tran, would assist them in expanding abortion, a national 2019 goal outlined late last year.

Tran can be seen here in the video with representatives of Planned Parenthood and Whole Woman’s Health — both abortion clinic chains — who support her horrific bill:

… [W]e must also repeal the existing restrictive and demeaning abortion laws on the books by passing the Repro Equal Access Laws Act sponsored by Sen. Jennifer McClellan and Del. Kathy Tran. These laws have been on the books for too long, failing to reflect current medical knowledge and standards of practice, and interfering with the doctor-patient relationship.

This bill would finally repeal the medically unnecessary and overly burdensome regulations such as the belittling 24-hour waiting period, mandatory ultrasound, and other medically pointless laws….

“While Virginia has no pre-Roe ban and no trigger law that would remove abortion should Roe be gutted by the Supreme Court, neither is there any explicit protection of this fundamental right….” the abortion advocates continued, adding “…This bill is critical to paving a way for Virginians to have the freedom and dignity to make their own personal and private health care decisions, should their rights be stripped away by the Supreme Court.”

When the legislation’s initial attempt was tabled, Wesolowski thanked Tran for the radical abortion-up-to-birth legislation by stating (emphasis added):

Delegate Kathy Tran is a champion for women in Virginia, and we thank her for standing up for what is right. A patient and their doctor are best suited to weigh the medical and personal circumstances of a pregnancy. Politicians have no business interfering in those decisions, and we appreciate Delegate Tran’s efforts to remove politicians from the process.

Planned Parenthood Advocates of Virginia hosted a Facebook event to push additional legislative moves to expand abortion and remove abortion from the state’s criminal code. One of those measures, HB 2369 Virginia Human Rights Act; establishment of right to reproductive choice, would “establish[] that… every individual who becomes pregnant has a fundamental right to choose to carry a pregnancy to term, give birth to a child, or terminate the pregnancy.”