For 11 years running, a Marist poll has been conducted on Americans’ abortion views. On Tuesday, the newest poll was released, showing that “overwhelming majorities support substantial restrictions on abortion.” The poll shocked some, revealing that Americans have similar views on abortion across the political spectrums, even while a majority of those polled — 55 percent — identified as “pro-choice.” The number of those identifying as “pro-life” was the lowest it has been in years, coming in at 38 percent. Despite the labels, an overwhelming majority of Americans want to limit and restrict abortion and enact protection for children.

WATCH: These videos illustrate how stopping abortion is protecting children

Ninety-two percent of Republicans, 78 percent of Independents, 60 percent of Democrats, and 61 percent of those who identified as “pro-choice” stated they wanted abortion allowed only in the first three months of pregnancy — at most. A significant percentage of this group believed abortion should restricted even further, as a plurality of 48 percent agreed that abortion should only be allowed in cases of rape, incest, to save the life of the mother, or not at all. 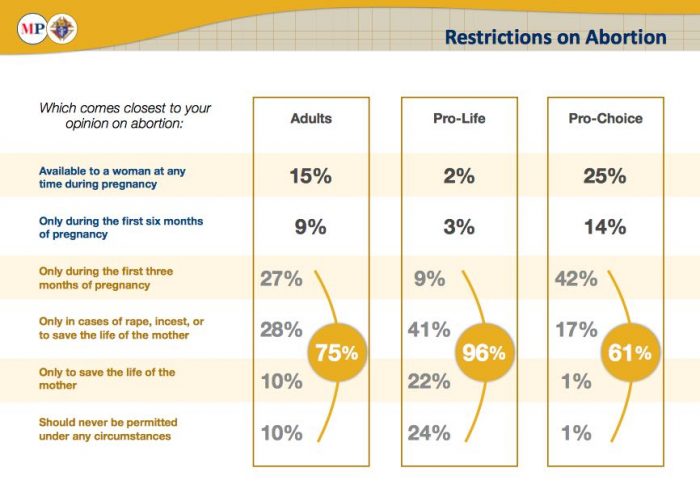 Perhaps one of the most revealing pieces of the data came from those who self-identified as “pro-choice.” Only 25 percent of people in this group wanted to see abortion legal at all stages of pregnancy. Only 17 percent of these pro-choice people believe that life begins at birth. In fact, more pro-choice people — 23 percent — agreed that life begins at conception, a scientifically factually viewpoint.

Ninety-four percent of Republicans, 80 percent of Independents, and 56 percent of Democrats opposed the taxpayer funding of abortion internationally — which means these Americans would support the Mexico City Policy and one of President Trump’s first moves in office which included restricting U.S. funding of international abortion to an even greater degree.

By a double-digit margin, a majority of all Americans oppose any taxpayer funding of abortion (54 percent to 39 percent). …

The survey also found that by more than 20 points, a majority of Americans believe that “scientifically” a fetus is “a unique life” (56 percent), while only about a third (35 percent) believe it is “part of a woman’s body.” A plurality of Americans say that life begins at conception (42 percent), while only about one in 10 say life begins at birth (13 percent). And by a margin of more than eight to one, most Americans also believe that laws can protect both the mother and her unborn child (83 percent to 10 percent).

On the eve of the 46th anniversary of Roe v. Wade, a new day is dawning — one that will soon see every child, born and unborn, protected in law. As the National Review reports:

For the first time in the history of the poll, Marist asked respondents what they would like to see the Supreme Court do, if and when it reconsiders its decision in Roe v. Wade. Almost two-thirds of respondents said the Court should rule either to allow restrictions as decided by each state (49 percent) or to outlaw abortion entirely (16 percent). Less than one-third of Americans said they’d like the Court to rule to allow unrestricted abortion. This means that more than 60 percent of Americans disagree with the central holdings of Roe, including nearly half of those who call themselves pro-choice and more than 40 percent of Democrats. …[E]ven Democrats and pro-choice Americans tend to support significant protections for the unborn.

And this is significant indeed.

When Americans witness this so-called “procedure” — even in an animated video (like the one below) without blood or actual abortion images — they change their minds, due to the violence and brutality of a procedure they believed was merely “medical.” The cold, hard facts are changing opinions all across America, despite the labels people put on themselves and each other. At heart, abortion is a human issue, and it is something human beings reject, whether they are Democrats, Independents, Republicans, pro-life, or pro-choice.