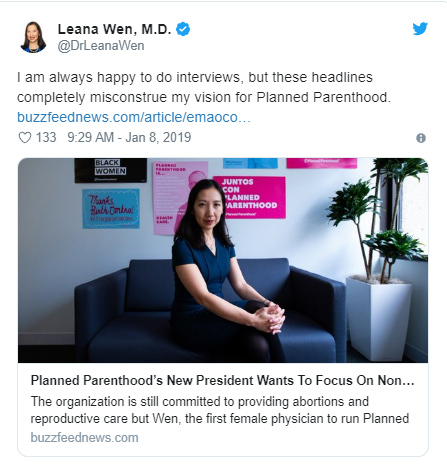 “First, our core mission is providing, protecting and expanding access to abortion and reproductive health care. We will never back down from that fight – it’s a fundamental human right and women’s lives are at stake,” Wen, an emergency room physician, wrote. But this statement flies in the face of the organization’s continued claim that abortion is only a tiny percentage of what they do. And interestingly, even when Planned Parenthood’s abortion numbers increase by the thousands, that 3% figure seems to stay the same. Even the Washington Post didn’t buy it, and Live Action debunked the claim in the video below:

Wen has been making media rounds, repeating the claim that healthcare (including abortion) is a “fundamental human right.” While conflating the terms “abortion” and “healthcare” doesn’t make it true, the incessant repetition of such a catch phrase is a clear propaganda effort by the new head of the nation’s largest and most profitable abortion corporation to convince the American public that abortion is totally normal.

However, 40 years of propaganda surrounding abortion — “choice” and “reproductive rights/health” euphemisms included — have not changed the fact that abortion isn’t like any other form of healthcare. It’s not like having a mole removed or a tooth extracted. It’s not a life-saving surgery (and in fact, abortion is never necessary to save a woman’s life). Abortion deliberately and directly kills a developing human being in the womb. No true healthcare seeks to purposely destroy the life of a human being.

People who watch what abortion is and does realize quickly that abortion isn’t like any kind of “healthcare” that most typically think of when they hear that term. Planned Parenthood’s president’s admission that abortion is the organization’s “core mission” is an interesting slip from a business that tries to downplay the fact that it kills 320,000 preborn children every single year — a third of all U.S. abortions done under one name: Planned Parenthood.