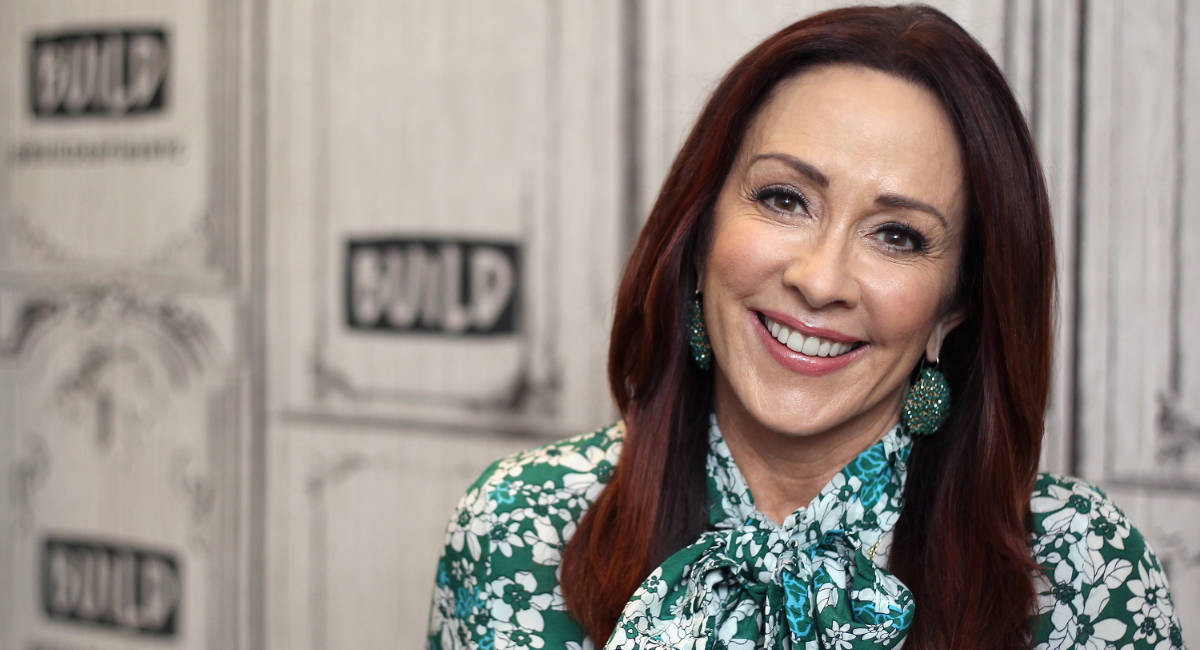 Patricia Heaton is one of television’s favorite moms. She’s also been a strong voice for preborn children, speaking out against abortion in her role as Honorary Chair of Feminists for Life and using her platform to raise awareness for the rights of children in the womb, especially those with Down syndrome. She is also always ready to come to the defense of motherhood.

In 2011, Heaton began supporting Reece’s Rainbow, a charity that helps find forever homes for children with disabilities internationally — many with Down syndrome. She volunteered to donate $1 (up to $10,000) to Reece’s Rainbow for every person who followed the organization on Twitter.

“The idea that a child could be institutionalized when there are people here willing to adopt them but maybe don’t have the financial means was so upsetting,” Heaton told Fox411 at the time. “With travel, lawyers and more, it can cost upwards of $30,000.

“I felt it was a problem I could have some impact on,” she added. “I had just hit 10,000 followers on Twitter and I said, ‘what better way to commemorate this little milestone but to try to help get this organization some recognition on Twitter.”

Since then she has continued to support the organization, helping to celebrate its 15th birthday on June 9. “Congrats and God bless @ReecesRainbow for 15 years of placing DS orphans with families, and bless those families who opened their hearts and homes to these beautiful children!” she said.

Congrats and God bless @ReecesRainbow for 15 years of placing DS orphans with families, and bless those families who opened their hearts and homes to these beautiful children! https://t.co/cwyEOkN8t4

The organization replied to her tweet, saying, “Thank you so much, Patricia! We appreciate all you do to help us raise awareness! God bless!”

Heaton hopes she is helping to de-stigmatize Down syndrome, noting that Hollywood is a very shallow industry that is influencing the values of America. She wants to help that change.

Heaton joined Feminists for Life (FFL) more than two decades ago, acting as FFL’s Honorary Chair beginning in 1998. “I wanted to find a group that had compassion, intelligent, reasonable people who are fun and life-affirming,” she said about joining the organization.

In 2005, at FFL-hosted Women Deserve Better® events, she called on U.S. Congressmen to address the reasons that women undergo abortions, which usually center around a lack of resources and support. Rather than treating abortion as the solution to women’s socioeconomic concerns, she urged the government to consider why women choose abortion so that they can treat the root of the problem rather than killing children in a misguided attempt to help women.

Over the years, Heaton has tweeted support for a pregnancy center and for the March for Life, and in 2017, she tweeted, “Life begins at conception. Said every scientist ever. #ProScience #ProWoman #ProLife”

Heaton also tweeted multiple times during the trial of late-term abortionist Kermit Gosnell, who killed children who survived his abortions by stabbing them in the back of the neck and severing their spinal cords. “The news coming out of the Gosnell abortion clinic trial is absolutely horrifying, yet not one network has done any coverage of it. Not one,” she said. She noticed that major media outlets frequently fail to cover the horrific truths about the abortion industry and she was brave enough to call them out on it.

She has also stood against Planned Parenthood’s racism that has existed since day one when it was founded by eugenicist Margaret Sanger. Heaton tweeted a link to a 2014 article discussing the horrific tragedy that more Black babies were being aborted in New York City at the time than were born, adding the remark, “Margaret Sanger gets her wish.”

Down syndrome and abortion

In 2017, CBS released its report that the country of Iceland was “on pace to virtually eliminate Down syndrome through abortion.” The report revealed that nearly 100% of women in Iceland who were told their preborn child had Down syndrome aborted their baby. Heaton fired back at the news outlet, pointing out the obvious fact that CBS was glossing over.

“Iceland isn’t actually eliminating Down Syndrome,” said Heaton in a tweet. “They’re just killing everybody that has it. Big difference. #Downsyndrome #abortion” 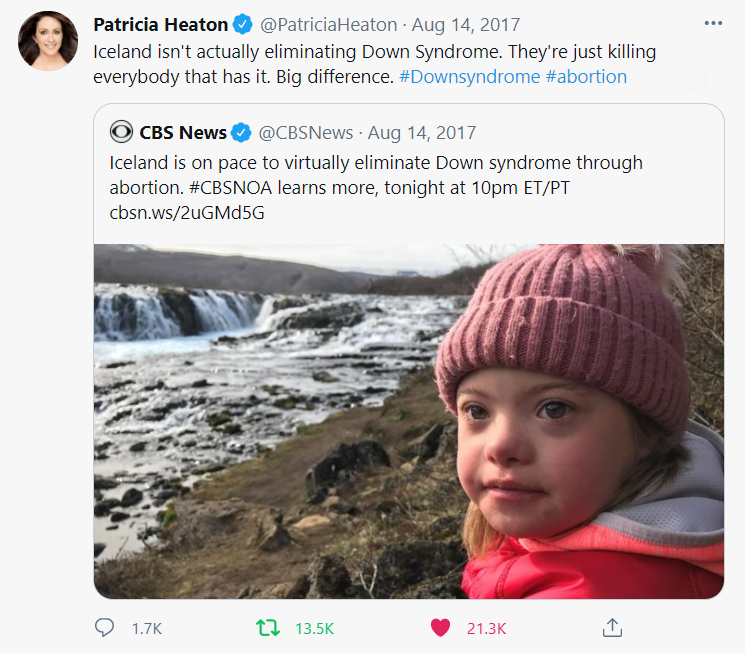 In the United States, about 67% of babies diagnosed prenatally with Down syndrome are aborted, and pro-life states have been attempting to combat that in recent years by passing laws preventing abortion for discriminatory reasons like a prenatal diagnosis of Down syndrome. Aborting an otherwise “wanted” baby because of a health condition is a direct act of eugenics and research shows that it is detrimental to the parents’ mental and emotional health.

Heaton, a mother of four herself, has had a successful career, starring in long-running TV shows “Everybody Loves Raymond” and “The Middle.” She is a vocal supporter of the vocation of motherhood as was made evident during a 2000 interview on the Oxygen network show “Pure Oxygen.”

A doctor appeared on the show moments before Heaton. That doctor stated that the morning-after pill, which has the potential to prevent a newly created human being from implanting in the womb and therefore continuing to develop, gave women “the opportunity — instead of having babies every year — they could actually do something with their lives.”

Having and raising children is doing something with your life! … For any mom out there who is listening, I caught that. And I have to say that having your kids is one of the greatest things you can do and a very important job.

Though the host of the show attempted to defend the doctor, Heaton wasn’t having it. “Even though we are a very baby-friendly environment, I still think that there’s a lot of feeling out there that [mothers have] second-class status in society.”

With her consistent support for women, motherhood, and preborn lives, Heaton has proven herself to be a voice for the voiceless and a strong advocate for pro-life issues and the real needs of women. Women don’t need abortion to be successful and achieve their goals. Women shouldn’t ever think they have to sacrifice their children or choose between their child or their careers. What they need is actual support that will allow them to overcome any obstacles they face and a voice that tells them they are good enough, strong enough, and capable of being both mothers and chasing their dreams, and Heaton is one of those voices.