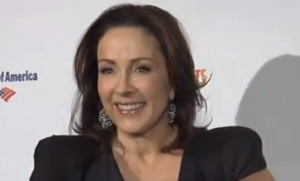 Hollywood is known for its liberal ideology and agenda, and few actors stand out as outspokenly pro-life. Celebrities who publicly oppose abortion are diamonds in the rough, and one of these — who has been an audacious pro-lifer for years — is Everybody Loves Raymond’s Patricia Heaton.

Once in a while, Heaton takes to Twitter to voice her pro-life convictions, like when she tweeted multiple times during the Gosnell trial in April about the horrors of his practice. She even called out network television for its silence on the matter (undeterred by the fact that she is employed by one such network — ABC —  where she currently stars on its primetime comedy, The Middle).

Last week, Heaton hit social media once again, when she linked to a National Review article about the staggering reality that, in New York City (where laws ensure that abortion statistic data are well-documented), more black babies are aborted than born. The article says:

In 2012, black women in New York City aborted over 6,500 more children than they gave birth to. Data from the New York City Department of Health and Mental Hygiene shows that, among non-hispanic black women, there were 31,328 “induced terminations” to 24,758 live births, according to a CNS News report.

Heaton added the tagline, “Margaret Sanger gets her wish,” referring to the founder of Planned Parenthood’s eugenic belief in ethnic cleansing. Live Action has documented Planned Parenthood’s ongoing racism over the years, as it silently carries on the eugenic goals of its founder.

Margaret Sanger gets her wish: http://t.co/BJeHQXtJmY

Heaton is part of a small cohort of pro-life celebrities in Hollywood, but we applaud her for utilizing her fame and reach to provide a platform for those who have no voice to speak up for themselves. You can become one of Patricia’s “tweetons” by following her here.