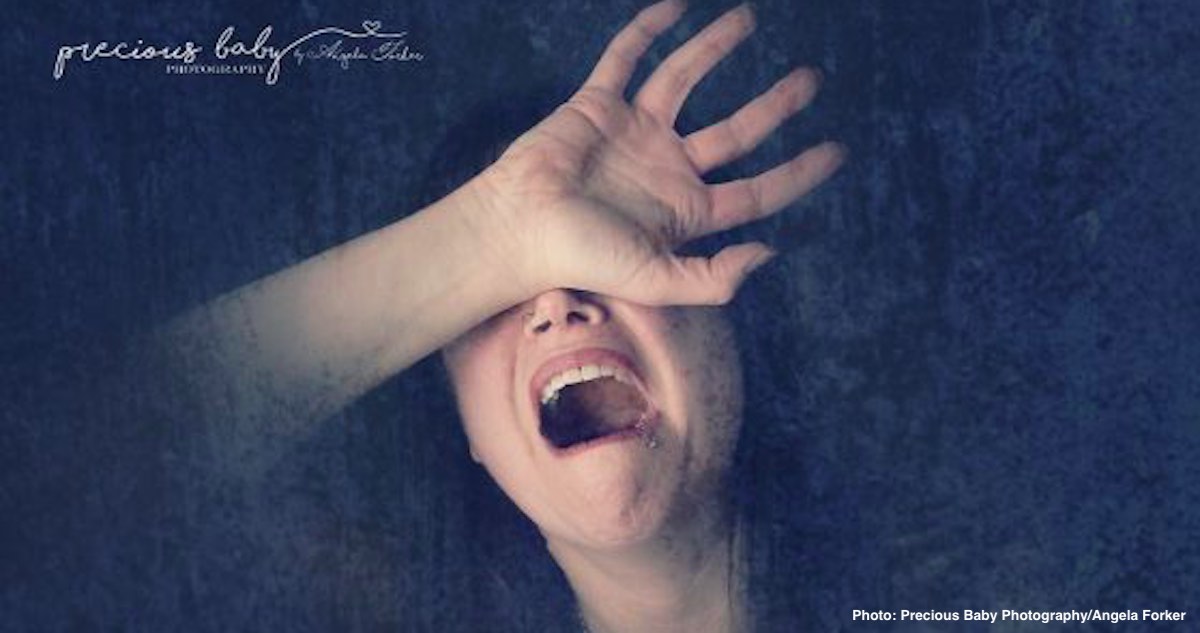 Told she could not become pregnant, Rachel was shocked by not one, but two unexpected pregnancies within the same year. The decision to have an abortion the first time was a quick one, but the second one was difficult. More than two decades later, Rachel regrets both.

Addicted to drugs and alcohol and in an abusive relationship, Rachel had an abortion almost immediately when she learned she was pregnant. She was about nine weeks gestation, and visited the abortion business of the now infamous Ulrich “George” Klopfer, who kept the bodies of thousands of the babies he aborted.

“I never wanted to keep the baby but I didn’t want to have an abortion,” said Rachel. “I didn’t want to subject a child to my boyfriend. He was a horrible person to live with. He would beat up his dog. It was like — how would he treat his child? And it never occurred to me that if he’s this bad I should leave. My mind never went there. I was so messed up.”

She told Live Action News that the abortion was a horrible experience. “Certain things about the visit just really were seared into my mind,” she explained. “It was so painful and so horrible that I swore I would never do it again.” 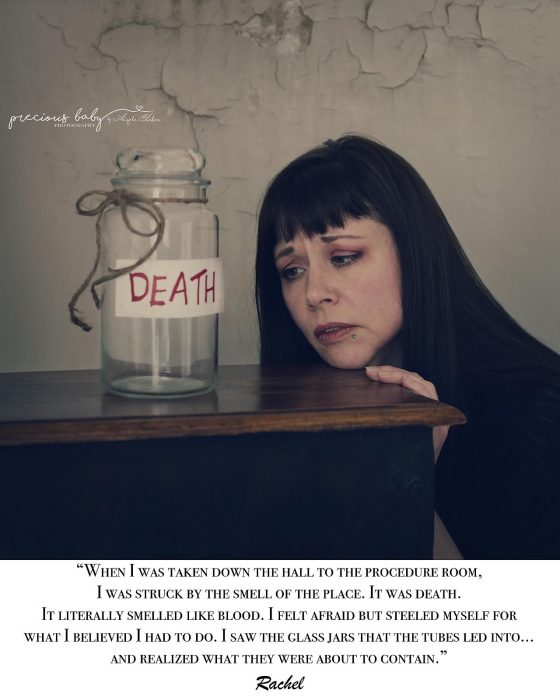 Rachel’s abusive boyfriend convinced her that she had only gotten pregnant because he had temporarily stopped smoking marijuana in order to pass a drug test at work. But, nine months later, she was pregnant again.

“I told myself that it was because I still had pregnancy hormones in my body from the first time,” she said. “I kept trying to ignore it and the symptoms were getting worse and worse.”

Rachel eventually decided to see an OB/Gyn and had an ultrasound. But she couldn’t bring herself to look at the ultrasound picture and instead, kept the image of a blob of tissue in her mind.

“When I went to the abortion clinic the first time and they showed me the equipment they used, it’s a quarter of an inch wide so I assumed that’s how big the blob was,” said Rachel. “I never pictured that it was a person.”

Rachel struggled with what to do as weeks went by, but at about 15 weeks, she underwent her second abortion, also at the hands of Dr. Ulrich Klopfer. 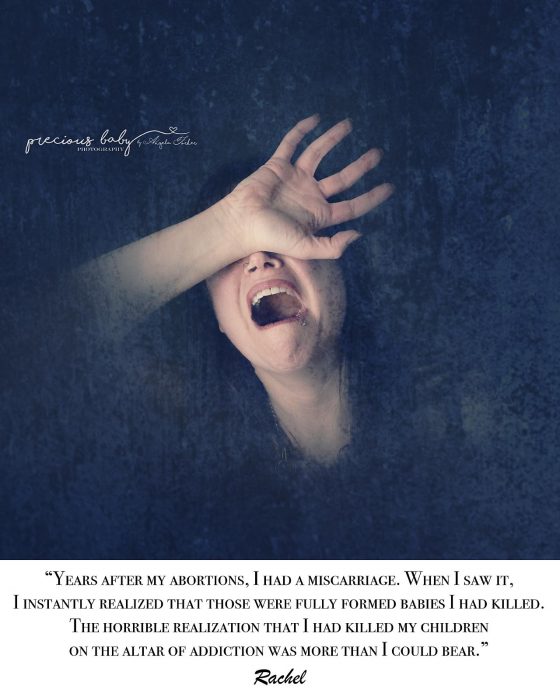 “The second time around was even worse,” she said. “I knew it was gonna be bad so I had packed vodka to drink in the waiting room when I went to change my clothes and the only thing I had to pack it in was an empty garlic jar. So I was downstairs drinking garlic-flavored vodka.”

Rachel remembers nearly every detail from the abortion facility that day: how the sunlight looked in the locker room, what the woman who took her money was wearing, how hot it was in the waiting room, the screams and cries of other women, the nurse eating a Baby Ruth bar in the procedure room, the smell of the hallway — iodine and blood. It is all tucked away in her memory.

“When I was taken down the hall to the procedure room, I was struck by the smell of the place,” she told photographer Angela Forker for the After the Abortion Photography Series. “It was death. It literally smelled like blood. I felt afraid but steeled myself for what I believed I had to do. I saw the glass jars that the tubes led into… and realized what they were about to contain.”

As the abortion ended and she tried to get up, the nurse pushed her back down. “She wouldn’t let me get up,” said Rachel. “I couldn’t figure out what was going on. I kept trying to get up and she kept pushing me back down. I don’t know what [the abortionist, Dr. Klopfer] was doing but he was still in the same position. After a few minutes I was starting to freak out and all of a sudden it was okay and they let me get up. And I was in the recovery room and he came in there and he came up to me and wanted to shake my hand and it was so strange. I stood up and he shook my hand and he had this odd look on his face and he was looking at me like he was pleased with me. It was so bizarre. It was so weird.”

Seven years went by and Rachel was looking for someplace to belong. Her mother had become involved in witchcraft and invited her to get involved. She stopped taking drugs, she ended her abusive relationship and she thought she had found God. She even met her future husband. But within four years, they would both experience encounters with Christ that would pull them out of witchcraft for good. They rid their home of all of their witchcraft-related items and began a new life. 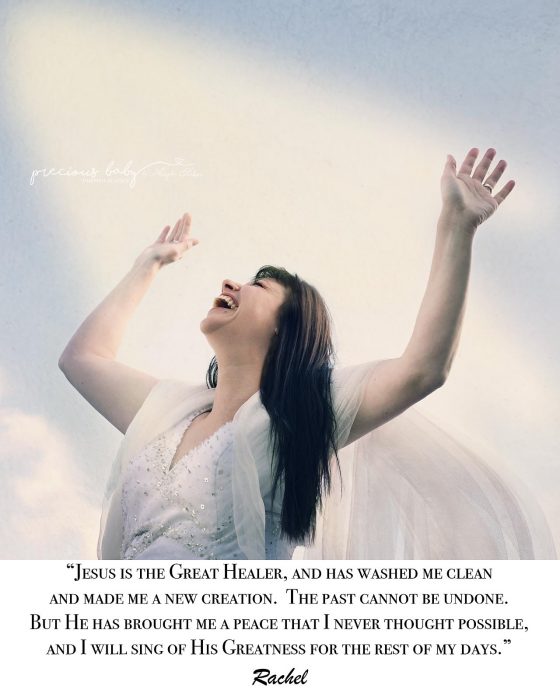 When Rachel first married, she became pregnant but suffered a miscarriage at 11 weeks. “When I saw that baby, the first thing that came to mind was the abortions, and I knew I had a glimpse of what I had truly done back then,” she said. “Miscarriage was traumatic. It was really bad. I was very sick for months. And so while processing the abortions I was mostly in the present, dealing with the physical trauma from the miscarriage.”

The couple went on to have a baby girl, and her husband became an associate pastor. Then the pro-life film “Unplanned” was released. She avoided watching it for a while, but one day she decided she needed to see it.

“I was thinking — this is what I did,” she explained. “That’s what happened with my baby — and I was just completely traumatized.”

After that, Rachel learned what she could about abortion. She read books and watched the movie “Gosnell: The Trial of America’s Biggest Serial Killer.” She read a Senate hearing on Planned Parenthood. “My eyes were just opened to the reality of abortion, and it was really hitting home with me and I was traumatized but filled with a desire to do something,” she said.

Just weeks later, Klopfer’s death was in the news, due to the discovery of the bodies of thousands of aborted babies in his garage. Horrific thoughts went through Rachel’s mind about why she had been held down on the table. She wondered if her baby had been born alive. She wondered if she had been pregnant with twins and if the abortion was a dismemberment D&E abortion. She called her local Right to Life Chapter and told them that she had been one of Klopfer’s patients. That was the start of her pro-life work — speaking and sharing her story. She believes that if people knew the truth about abortion, no one would have one.

Rachel doesn’t think of her story as special but says she is “someone who went through it and is willing to talk about it.”

“I’m just glad that God is so amazing that He can take something so ugly and use it for good,” she said. “[…] Just learning what abortion is was so horrifying to me… And I just felt like there’s gotta be so many people out there that if they knew what it really is, they wouldn’t do it. They wouldn’t walk through the doors. They wouldn’t support it.”