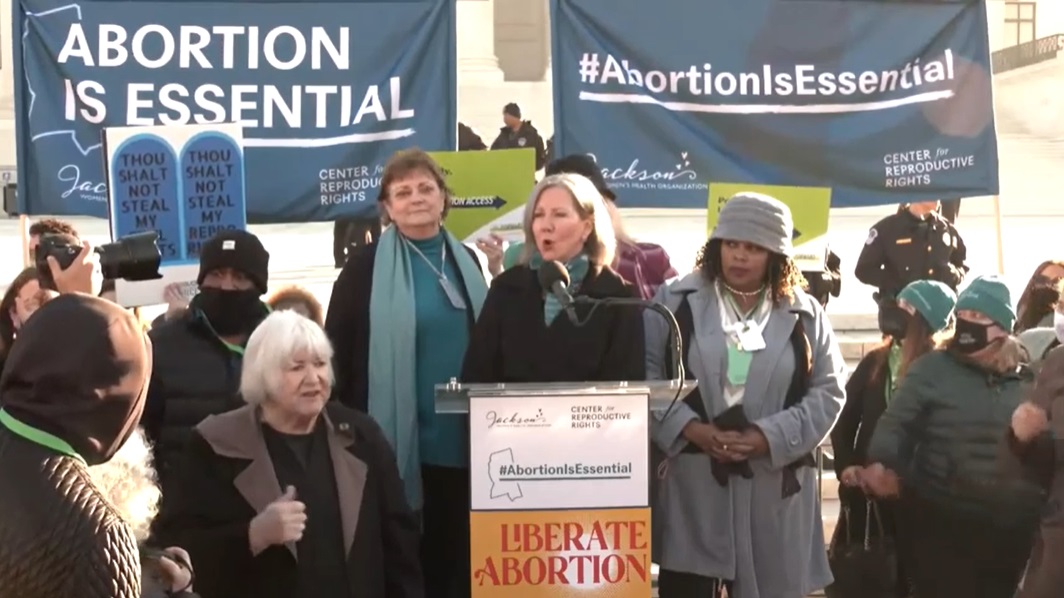 The Center for Reproductive Rights (CFRR), a radical pro-abortion organization funded by multiple abortion philanthropist organizations, is the group responsible for challenging Mississippi’s Gestational Age Act, a law restricting abortion after the 15th week of pregnancy.

Outside SCOTUS, CFRR’s President and CEO Nancy Northup stood on the steps of the Supreme Court between signs that read “Abortion is Essential.” She told supporters that CFRR is a group of lawyers and “human rights advocates” who are “working to ensure that reproductive rights are protected in law as fundamental human rights.”

Northup referred to those working in the abortion industry and committing abortions as “fearless leaders,” and repeatedly referred to the violent killing of preborn babies as a “fundamental human right.”

According to Northup, this was the fourth time that CFRR has argued to protect abortion before the High Court in the past six years, including efforts to block the Texas Heartbeat Act (SB8), which remained in effect at the time of her speech.

“We are here to win,” Northup vowed.

But just who is the Center for Reproductive Rights and what do they really do?

The Center for Reproductive Rights (CFRR) was founded in 1992 by Janet Benshoof, who previously served as director of the ACLU’s Reproductive Freedom Project. Benshoof had made abortion one of the [ACLU’s] top priorities during her time there, and had expanded the “project’s annual funding from $70,000 to $2.2 million,” reported the Washington Post at the time of Benshoof’s death in 2017.

Benshoof, who in 1984, claimed to have received Planned Parenthood’s infamous Margaret Sanger Award, can be credited for the ACLU’s involvement in “every significant abortion case to reach the Supreme Court,” the ACLU stated. “Most notably, under her guidance, the ACLU went to the Supreme Court in Planned Parenthood v. Casey, where the fate of Roe hung by a thread, and abortion rights were upheld by a vote of 5-4,” the ACLU added.

Nat Hentoff, a pro-life columnist from The Village Voice, saw Benshoof’s exit from the ACLU as a positive move. He told the New York Times in 1992, “The A.C.L.U. used to be known first of all as protector of the First Amendment and the Fourth Amendment, and now it seems to have become the litigating end of the National Abortion Rights Action League and the National Organization for Women. It’s good for the A.C.L.U. that this close identification gets less close.”

The ACLU has continued to defend unlimited abortion on demand, and CFRR has joined in its efforts.

At the time Benshoof left ACLU to found CRLP, she told the New York Times that she hoped to continue to receive money from the Rockefeller, the Ford and the Robert Sterling Clark Foundations. The MacArthur Foundation has continued its support of CFRR, according to its grants page. Benshoof served as founder and president of CRLP from 1992 to 2002.

“I think a fetus is not a person under the Constitution until they’re born,” Benshoof once told the media.

Shortly after its founding, CRLP challenged the government’s import ban on the abortion pill RU-486. “Lawyers for the center said they hoped to use this case as a first step toward bringing the abortion pill to American women,” according to the New York Times.

“In 2000, CRLP mounted an extraordinary campaign on behalf of every American woman’s right to choose. Our attorneys went to the Supreme Court in Stenberg v. Carhart, challenging Nebraska’s so-called “partial birth abortion” ban,” the group wrote in its 2000 annual report.

In its 2001 annual report a year later, the group wrote, “As for PBA, we took more than a third of the 31 states that passed the bans to court. And with our Supreme Court victory in Stenberg v. Carhart in 2000, we rendered PBA bans unenforceable across the country.”

“CRLP has petitioned the FDA, on behalf of more than 60 medical groups, to make EC available over-the-counter…CRLP has successfully challenged numerous parental involvement laws across the country” they also wrote in 2001.

In early 2003, the CRLP updated its website and changed the name to the Center for Reproductive Rights.

“As we have grown and evolved as a successful organization in the reproductive rights arena, we recognized the importance of focusing on the goals we are seeking to achieve (rights) – not just on the tools we use to attain them (laws and policies). By changing our name to the “Center for Reproductive Rights,” we call attention to the very goal we seek to achieve – women’s rights to reproductive health and choices – rather than the means we use to secure those rights,” the group wrote at the time.

“Reproductive rights, the foundation for women’s self-determination over their bodies and sexual lives, are critical to women’s equality and to ensuring global progress towards just and democratic societies. They are fundamental human rights that cannot be denied in the name of religion, culture or politics. Our new name focuses on those rights – and the aspirations associated with them,” the group added.

By 1998, the abortion rights group had garnered net assets of over $7 million dollars, according to the CRLP’s 990s. 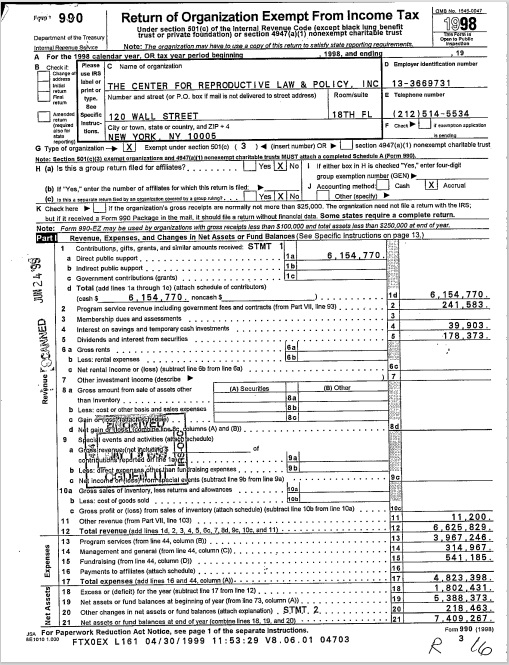 By 2016 CFRR’s finances had skyrocketed, “gross[ing] $31,713,408,” reported Influence Watch. “Much of that funding came from corporate and non-profit donors. The Laura and John Arnold Foundation donated $500,000 or more while George Soros’ Open Society Foundations and the left-leaning grant maker Libra Foundation donated between $100,000 and $500,000.”

The Court’s decision in Dobbs v. Jackson Women’s Health Organization is expected in June of 2022.