The push to force California colleges to provide deadly abortion pills via legislative mandate (SB320) is a dangerous idea. But it’s not being funded primarily by the state. Instead, two pro-abortion philanthropic organizations have pledged their support to the tune of nearly $20 million. According to the website StateofReform.com, SB320 needed at least $9.6 million in private funding “made available to a state fund January 1, 2019,” to move forward. As the bill is moving forward, it is relevant to ask who is behind those funds: “[T]he Funders’ Collaborative, led by the Tara Health Foundation and The Women’s Foundation of California, committed just under $20 million in funds to ensure that it will move forward at no cost to the state.”

According to a letter from TARA to the Chair of the California Appropriations Committee, TARA and The Womens Foundation “have collectively committed to just under $20 million dollars in implementation funds ready to be deployed as soon as this important bill becomes law. All of the funders will make donations to a California nonprofit organization that will be responsible for providing the $9.6 million to the California Commission”:

An additional $9.875 million dollars will be provided directly to appropriate technical assistance
advisors, and an evaluation team, as well as directly funding grants of $200,000 each for any
community colleges or private universities that wish to become ready to provide medication
abortion at their student health center. 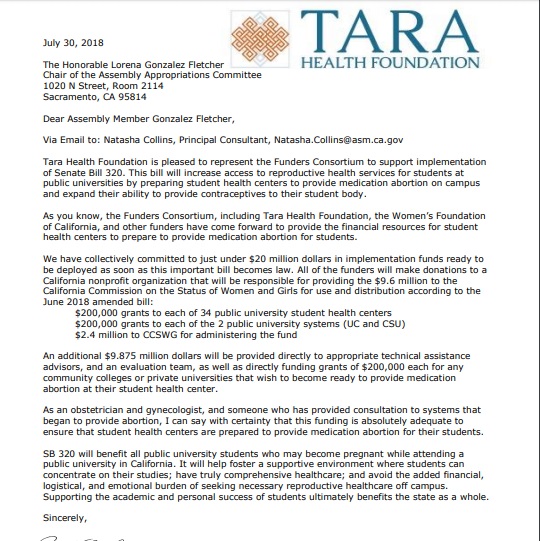 TARA Health Foundation was founded by Ruth Shaber, an OB/GYN who held research positions at Kaiser Permanente. According to her online bio, she sits on the Medical Advisory Committee for Planned Parenthood Federation of America. Shaber is also the chairman of the board of TARA’s Reproductive Health Investors Alliance, which partners with abortion organizations like Planned Parenthood, and has granted them $3.35 million.

Shaber claims the mission of TARA consists of “engaging peers to join in piloting and demonstrating the use of creative philanthropic capital to drive social and financial returns.” Those “social” returns include abortion on demand. According to its website, in 2014, Shaber named the foundation “after the goddess Tara in order to invoke the strength and compassion of a powerful female deity. Tara, a Hindu goddess later adopted in Buddhism, embodies both fierceness and maternal protection for all beings. She represents creation, wisdom, oneness and strength to overcome obstacles.”

How, exactly, does killing children via the abortion pill square with “maternal protection for all beings”? 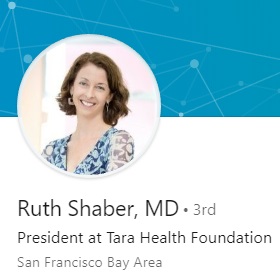 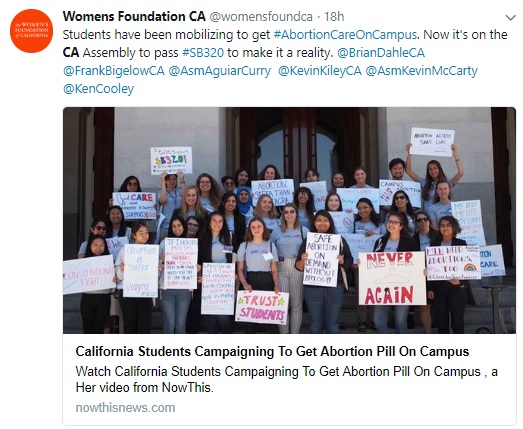 According to Marj Plumb, DrPH, Chief Strategist of Policy Advocacy and Training at The Women’s Foundation, SB 320 came out of a training program called the Women’s Policy Institute. Plumb told StateofReform.com:

One of our teams a couple years ago had heard of the UC Berkeley effort [to petition the University to offer medication abortions at the campus health center] and felt that there needed to be a state law that required the state university health centers to provide medication abortion. So they partnered with Senator Leyva who helped to write the bill language and do the advocacy…

Primarily, The Women’s Foundation of California and Tera Health Foundation…helped to implement both medication and other types of abortion at Kaiser and at other facilities. Then we have other funders who are participating with us, several of whom wish to remain anonymous.

TARA’S philanthropy was recently used to prop up the abortion chain Whole Woman’s Health (WWH) while they raised legal challenges to Texas’s abortion laws, taking it all the way to the Supreme Court. An interview Shaber conducted with the Wharton School at the University of Pennsylvania, Shaber explained:

One example of how we’re using capital in an integrated fashion and creatively is in how we’ve supported Whole Woman’s Health, an organization of clinics led by Amy Hagstrom Miller… because of the burden of the litigation, they needed to open and close their clinics multiple times. As a result, they had a large amount of debt, and the only place they were able to get capital from was high-interest credit card debt. When we got involved in supporting them…giving them a grant, we were able to do this private debt. It’s giving us a 3% return over five years.

Recent FDA reports indicate that almost a dozen women have died from the abortion pill and a thousand have been hospitalized. Women suffering adverse effects of the abortion pill may claim to hospital emergency rooms that they are experiencing miscarriages rather than medication abortion complications — and this can skew the real numbers of reported complications, which may have a tremendous impact on the safety of vulnerable young women.

College campuses should not be partners in killing off future generations. And no matter how much money is raised, abortion will never be a good solution for women.