A French author and her research team witnessed sonograms performed on pregnant women – some of whom wanted their babies and others who were abortion-minded. The author, Luc Boltanski, noted that doctors spoke very differently to the women based on whether they wanted an abortion or whether they planned to keep their babies. In cases where the baby was labeled “unwanted,” the child was dehumanized. But with women who were continuing the pregnancy, doctors emphasized the child’s humanity and referred to those children as “babies.”

Even the arrangement of furniture in the sonogram room was different based on whether the woman wanted her baby. This was how the room was set up for women who were continuing the pregnancy:

[T]he typical arrangement was the following. The pregnant woman lay on an examination bed, facing a screen that she could see without difficulty. To the left of the bed, there was a chair, turned towards the same screen, intended for the person who accompanied the woman (usually the male progenitor of the child to be born). To the right of the bed, there was a desk with a second sonogram screen controlled by the doctor.

The woman who wanted her baby was facing the sonogram screen directly. In contrast, when a woman wanted to abort, the only sonogram screen was set up so that she could not easily see it. Also, there was no chair in the room when the woman wanted an abortion. The doctors realized that very few, if any, fathers of babies to be aborted wanted to see their children. The women, in these cases, were having their sonograms alone. 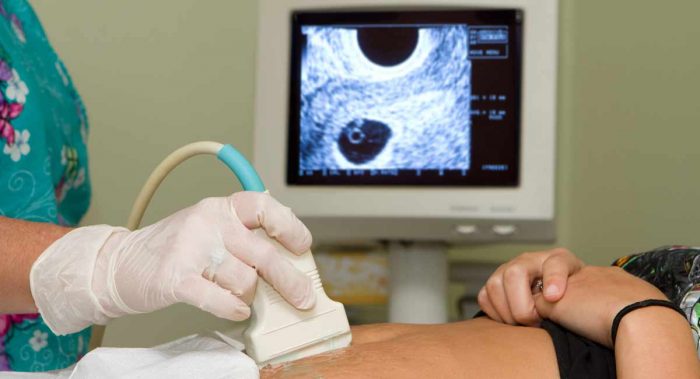 The way the doctors talked to the women was also extremely different. Here is a typical conversation between a doctor and a woman upon seeing her wanted baby on the ultrasound screen:

The patient: Oh, yes, you can really see it! (The screen shows a small thing that moves, dilates and contracts very fast) …

The doctor: That’s blood going through the heart.

The patient (to her husband, sitting by her side): Look at the mouth, did you see it?…

The doctor (moving the probe): It’s a girl.

Boltanski noted that “the being implanted in the [womb] is designated as ‘your baby’, its developing organs, particularly its heart and its sex, are pointed out and identified.”

The doctors used the word “baby,” happily pointed out all the baby’s parts, and gave a great deal of information about the child to women and couples. They were given encouragement about how well the pregnancy was proceeding.

This is in stark contrast to what was said when the child was unwanted. Some doctors did tell the women who wanted to abort that they could look at the ultrasound if they wanted to, but the women were not encouraged to do so.

[D]octors spoke of ‘visualizing what is going to come out; and very often used a demonstrative pronoun ‘that’s what’s going to go.’ The doctor might also speak of the ‘products of the expulsion’ or, when pressed by anxious questions from the patient and obliged to provide fuller explanations, he might speak of ‘a big gray lump to be expelled,’ ‘a little spot from which the pregnancy would develop’ or ‘a projected pregnancy.’

If the patient wanted to know more or asked more insistent questions, the doctor might speak of an “embryo,” but only to deny its presence: “there isn’t an embryo inside, just a blastocoele,” “there is just a cavity with the placenta around it,” “there’s no visible embryo.” The expressions used by the doctor thus combined to imply not that they saw nothing but that what they saw was nothing. The term “baby” was never used (except in one case, but in a negative form, when the doctor asked: “What was your method for not starting a baby?”).

READ: Teen Vogue tells teen girls abortion is ‘popular’ and will give them ‘freedom’

As we can see, the doctors dehumanized the baby as much as possible and even outright lied. For women who wanted their children, the fetus was a “baby” always. For women who did not, the baby was a “lump,” a “spot,” a “pregnancy,” a “cavity,” and a “blastocoele.” Of course, from a scientific standpoint, the latter is completely false – the blastocyte stage occurs before implantation.

Boltanski never implies that the women seeking abortion were earlier along in their pregnancies than the women who wanted to give birth. The gestational age of the babies seemed to be the same on average.

The doctors also used euphemisms to describe the abortion procedure, saying that the abortion might hurt because “the uterus tightens up around a void” and comparing abortion by pill to a miscarriage.