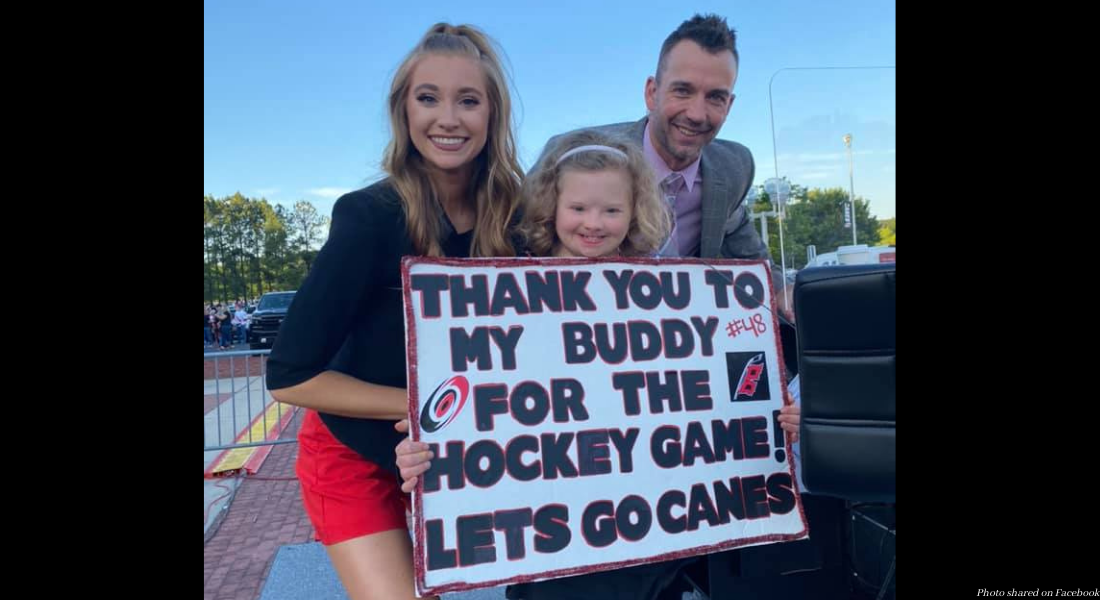 Earlier this year, the nation was awed by the special relationship between 12-year-old Emma Izzo, who has Down syndrome, and Jordan Martinook, a hockey player for the Carolina Hurricanes. The two met for the first time in 2019, and a friendship bloomed, with Izzo cheering on her buddy at every game. But when the COVID-19 pandemic hit, Izzo wasn’t able to attend any games and missed seeing Martinook. When they finally reunited in April, Martinook gave Izzo his hockey stick, and the meeting went viral. Izzo has since found support and love from other hardcore Hurricanes fans like herself, who have banded together to support her and other fans with special needs.

Carolina Hurricanes fans — who call themselves Caniacs — have created fundraisers to get Izzo and her family to as many games as possible. The Izzo family lives in New Bern, which is two hours away from Raleigh where the Hurricanes play. This adds travel to their expenses when they want to attend a game. But thanks to the Cainiacs, they’re able to go on a regular basis. 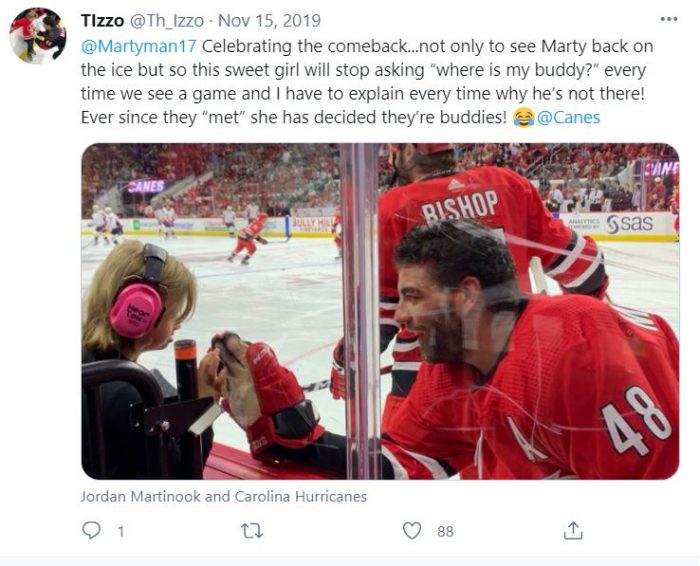 “I think in a lot of ways, special needs families don’t feel represented in the sport,” Crystal Speeks-Strohecker, who organized the fundraiser, told the Daily News. “The fact that Emma is a model for that inclusion, that makes her an inspiration. What is special about people with Down syndrome is that there is happiness so deep inside of them where maybe they can verbalize it, but you can see it in them because it leaks out of their pores.”

It all started when Martinook first noticed Izzo at a preseason game in 2019 and gifted her a puck, and he quickly became her favorite player. They eventually met in person, and Izzo received a signed jersey at a Carolina Hurricanes event in 2020. People began to notice the family making the long drive to games.

“It was weird. We went to three games in a row where they won by three goals and people starting calling Emma a good luck charm. People loved her and wanted to see her,” Tina Izzo, Emma’s mother, told the Daily News. “Then, somebody posted a picture of Emma holding a sign and then someone on the fan page said…, ‘We need to make sure she gets to every game this season and next season.’”

Cainiacs wanted to get two tickets for Izzo to attend every game, but the fundraiser was so successful that they were able to secure four tickets for all of next season. And money is still coming in, which will help other Hurricanes fans with special needs.

“We are still taking donations,” Speeks-Strohecker said. “Once this goal is met, we will be forming a nonprofit to raise more money to help other special needs families come to the games.”

The movement hasn’t escaped Martinook’s notice, either. His mother worked with adults with developmental disabilities, and he volunteered with the local Down syndrome organization when he was playing hockey in Arizona. That love for his fans with special needs has clearly continued in North Carolina. “For Emma to get the recognition for just how special she is… it speaks volumes of our fan base,” he said during a recent news conference. “It is amazing. I get a little emotional thinking about it. Thank you Caniacs.”

For Tina Izzo, she is grateful to know the Caniacs will continue supporting other fans with special needs. “This shines a light on kids like her and how much things like this can mean,” she said. “We want other families to experience this, too. Any game that we can’t go to, we will find other special needs kids who want to go to games. It is a way to give back.”

To donate to the Cainiacs special needs fund, visit givebutter.com/Caniacs4emma.