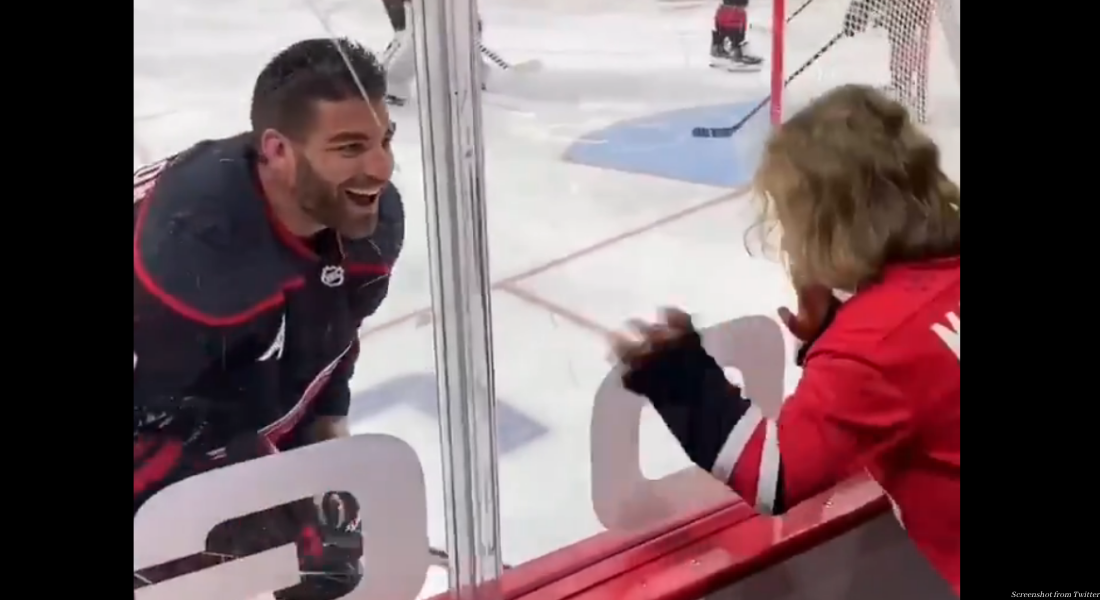 Carolina Hurricanes hockey player Jordan Martinook may be known by most fans for his prowess on the ice. But for Emma Izzo, a little girl with Down syndrome, he’s her buddy — and she looks forward to seeing him every single game.

Izzo, who is now 12 years old, met Martinook in 2019 for the first time, and they quickly built a friendship through the glass during games. But when the COVID-19 pandemic began, Izzo wasn’t able to see her friend for a long time. Their reunion at a game last week was so heartwarming that it quickly went viral.

Tina Izzo, Emma’s mom, tweeted about their encounter, and it was seen by thousands. “A sincere THANK YOU for making this girl’s night, month & year!” she wrote, tagging Martinook and the Hurricanes in the tweet. “She was just so happy that you saw her & came over to say hey, but giving her your stick made it even more special! The interaction with her means so much!”

@Martyman17 A sincere THANK YOU for making this girl’s night, month & year! She was just so happy that you saw her & came over to say hey, but giving her your stick made it even more special! The interaction with her means so much! @Canes pic.twitter.com/t2m3V9X4Bw

Soon, their story was being covered by local news outlets, and even the NHL was sharing the video. “We’ve watched every game and she started saying, ‘I want to go to a hockey game,'” Tina Izzo told ABC11. “‘I’ve missed my buddy.’ That became her thing that she kept saying, she’s missed her buddy. We just made the effort and just to be able to reconnect with him and the other Canes fans that were around. It really was something special.”

While Izzo had just hoped for a smile and a wave, Martinook gave her a signed stick, which Tina Izzo said was so much more than either of them had expected.

“She was just wanting him to see her,” she said. “That was all she was wanting. She was like, ‘My buddy see me?’ I was like hopefully he will see you. She was just as happy when he waved and smiled at her, that was enough for her. When he said, Hold on a minute,’ I thought, ‘What is he doing?’ Was not expecting the hockey stick at all. It was just awesome. It was just such a thoughtful thing for him to do.”

Even one of Izzo’s teachers was moved by the kind gesture. “I wanted to personally thank you. Emma Izzo (the little girl with Downs Syndrome that you gave your stick to on Thurs night) is one of my students,” Jen Williams tweeted. “She talks about you several times a week. Your kind gesture warmed my heart. She was so happy to come today & share!”

But for Martinook, it was Izzo who brightened his day.

“Everybody thinks that I made her day,” he told ABC11. “I made her night but seeing her I told my wife… I got a little emotional seeing her. It was definitely great to see her back at a game and you just can’t help but smile when you see her. Her energy is amazing.”

Martinook has a history with people with disabilities; his mother worked with adults with developmental disabilities, and when he was playing hockey in Arizona, he volunteered with the local Down syndrome organization. And for him, making Izzo happy made him happy, too. “Even if I brighten her day a little bit that’s all that really matters,” he said. “It didn’t matter if she has Down syndrome or whatever. It’s just trying to interact with fans and that’s what it’s all about. If making people’s days better, it made my day better too because I couldn’t wipe the smile off my face the entire warm-up.”

He added, “My mom, she’s just very drawn to adults and children with Down syndrome and I think that’s definitely rubbed off on me. When you see her (Emma) it just makes you want to smile.”

The bond the two of them share is something that has made a big difference, not just for Izzo, but for her mom, too.

“When he just gave her that smile and that wave, it was so genuine and it’s an instinct she has to almost recognize a good person,” Tina Izzo said. “I could tear up a bit. It means a lot because there’s challenges of course with having a special needs child but there’s so many joys and happiness that come along with it so for someone else to recognize that little extra something special that she has and especially someone like Martinook that is at a professional level, your buddy, it really does mean so much. As a mom, the mom of her, she receives so much happiness and all from it, it just makes me happy.”