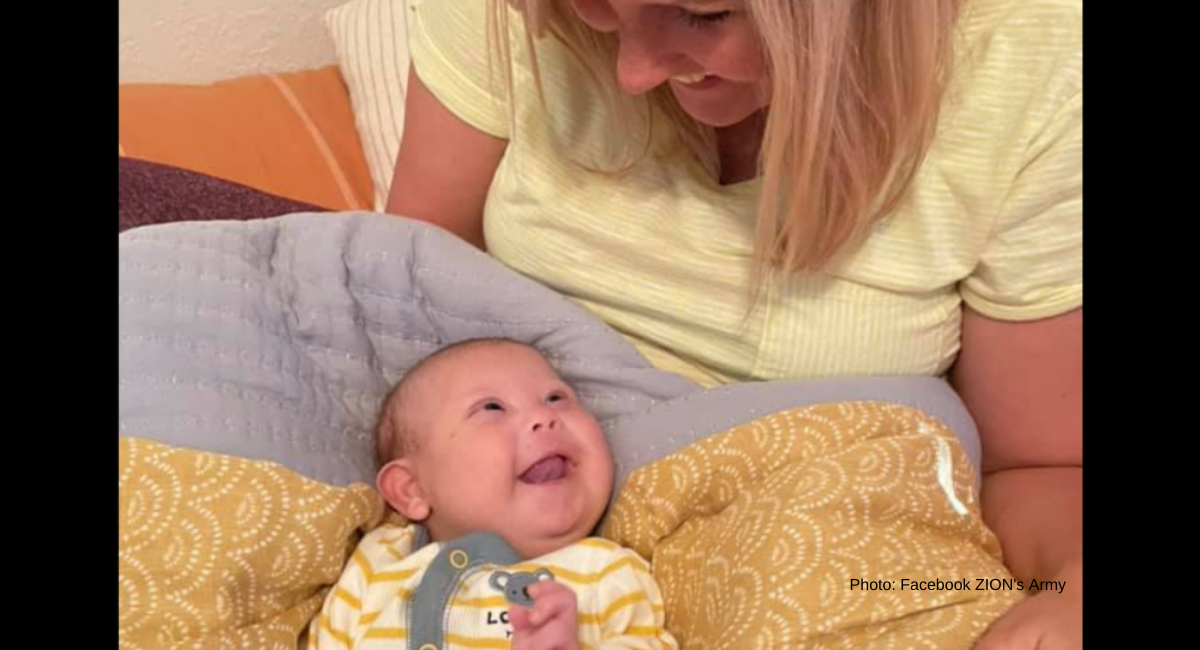 UPDATE, 10/22/21: The National Down Syndrome Society (NDSS) has released a statement about Zion’s death, urging for legislation to be passed preventing this kind of discrimination from happening again.

“We are deeply saddened to learn of the passing of Zion Sarmiento, an infant with Down syndrome who was denied the heart transplant he needed to survive,” the NDSS wrote on Facebook. Our team has been in touch with Zion’s family in Florida, and we are working closely with them and others to advance policy and practices that ensure people with Down syndrome have equal access to life-saving organ transplants. Stories like Zion’s are why NDSS advocates for state-level legislation and why we have championed the Charlotte Woodward Organ Transplant Discrimination Prevention Act (H.R. 1235) in Washington, D.C.”

They further directed followers to contact Congress to push for action on a ban on transplant discrimination, as well as to join the Zion’s ARMY Facebook page.

10/21/21: Zion Sarmiento, born with Down syndrome, has passed away at less than four months old after multiple hospitals refused him a heart transplant.

On June 15, 2021, Zion was born to Josh and Bobbi Sarmiento. In addition to having Down syndrome, Zion was born with a complete atrioventricular canal defect (CVAC), or a large hole in the center of his heart. For children with Down syndrome, CVAC is not unusual, and with open-heart surgery, is often able to be repaired.

The goal for Zion was, at first, to get him to four months old so he could be as strong and healthy as possible for the surgery. After spending 40 days in the NICU, he was allowed to go home before beginning to see his cardiologist. They decided to perform his surgery at three months old, on September 20.

READ: Denied a heart transplant because of Down syndrome, her family is ensuring this doesn’t happen to others

Unfortunately, the surgery did not go as planned. Zion went into cardiac arrest, and was placed on life support. His surgical team continued trying to help, with five more surgeries performed in just 12 days. They determined that Zion’s best hope would be a heart transplant, and his family began contacting numerous transplant centers to get it arranged.

Yet they were turned down by every single one, and Zion passed away on October 8, 2021.

According to the family’s official Facebook page, every single hospital they contacted turned them away; reportedly, they were told it would be a “waste of a heart.”

Sadly, Zion is far from the first child with Down syndrome to pass away after being denied a transplant. Though people often believe this kind of medical discrimination is illegal due to the Americans with Disabilities Act, that is a false assumption.

Currently, there is no federal law preventing this kind of deadly discrimination from taking place. A 2008 study from the Autism Self-Advocacy Network found that 85% of pediatric transplant centers take neurodevelopmental status into consideration when approving or denying transplants.

A 2016 letter sent to the U.S. Department of Health and Human Services’ Office for Civil Rights pointed out that many transplant centers are still refusing organ transplants to people with disabilities. It also included a statement from Dr. Arthur Caplan, director of medical ethics for New York University’s Langone Medical Center, which said, “If the potential recipient is severely intellectually impaired… I do not think it makes sense to consider that child for a transplant.”

Only a handful of states have passed bills banning this discrimination. A bipartisan bill is being considered, but it’s moving too slowly to save people like Zion, whose death could possibly have been prevented.