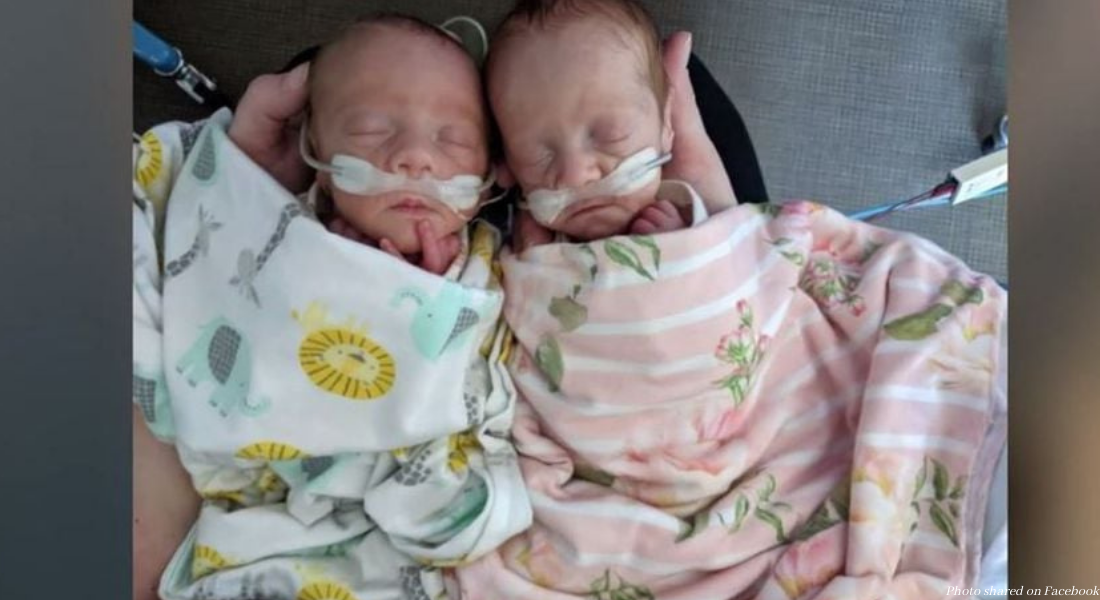 A Minnesota family is celebrating the surprising arrival of their twins. These amazing babies were conceived at the same time, but have two different birthdays — days apart and in different months.

Heather Perry was expecting to deliver her twins in May. But in February, she went into labor early. She was 25 weeks pregnant, and her water had broken. “That evening, I woke up feeling a lot of pressure, and I knew she was coming,” she told WDAY. So Perry went to the hospital, and waited several days for labor to start, but once it did, her daughter was born quickly.

“It was scary for sure because she came very quickly,” Perry continued. “They said, ‘You can push.’ I asked, ‘Are you ready?’ Three pushes and she was out.” With that, Perry and her husband were the proud parents of Baby Olive, who weighed just 2lbs, 4oz. All that was left after that was for Olive’s twin brother to come — but he stubbornly held on.

READ: ‘The best day of my life’: Premature twins reunited after doctors said baby girl would likely not survive

Days went by, and Ashton, the twin Perry was still pregnant with, didn’t descend. “Dr. Dangerfield said, ‘He is not coming, and so we’re just going to wait,'” Perry recalled. She even was able to visit the NICU and hold Olive, while still carrying Ashton in her womb. “Every time I would hold her, he would kick around in my stomach, like he just knew that she was up there but he was enjoying his extra space to sprawl out,” Perry said.

Five days later, on March 1st, Ashton was finally born — in a completely different month from his twin sister, who was born on February 24th. “It’s going to be a good story to tell at school and everyone they meet they can tell that story to,” the twins’ father, Chris Perry, said about the incredible delivery.

Both twins are still in the NICU, and will be released as they put on more weight. Both parents, along with big sister Fiona, can’t wait for the world to meet their amazing twins.

Babies born at 24 weeks are typically seen as having reached the point of viability, but 25 weeks is still very premature, and premature babies face medical challenges. Yet premature babies are still surviving at younger and younger ages. A study in the Journal of the American Medical Association (JAMA) Pediatrics from 2016 reported that up to 71% of preemies can survive if given active care, instead of just palliative care.

Premature babies can be fragile, but they are increasingly able to survive if only given the chance.