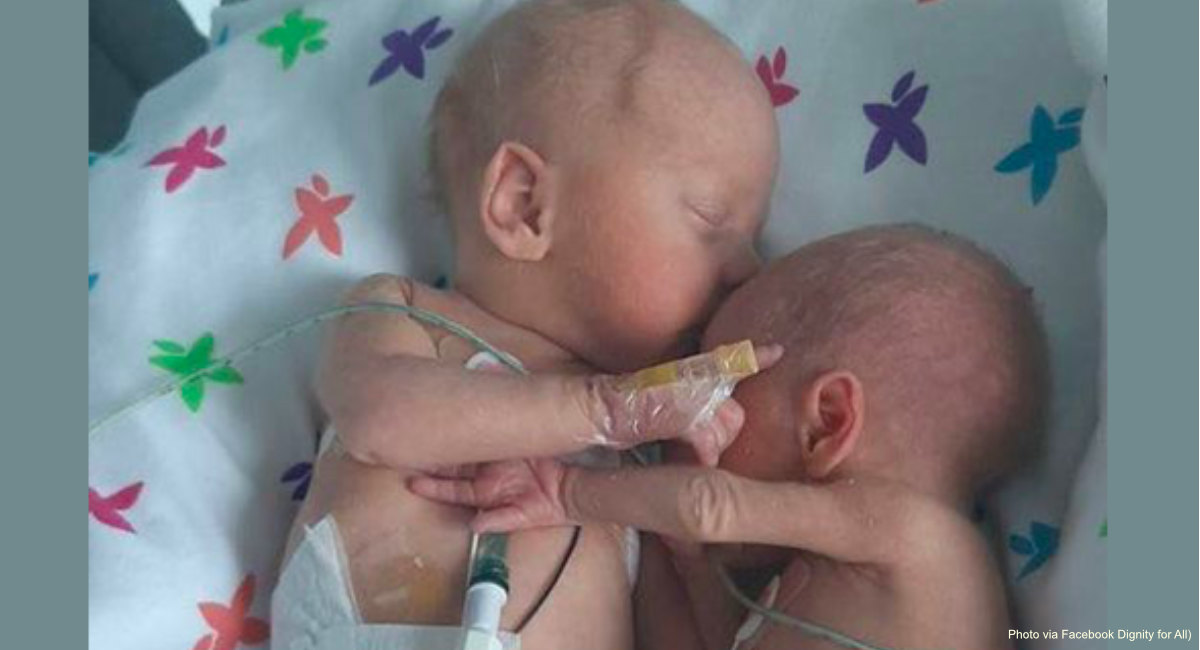 A baby girl who doctors said “would not make it” has been reunited with her twin brother after being separated at birth for two weeks.

Laura Hough was 30 weeks pregnant when her baby boy and girl were delivered prematurely via emergency C-section, according to news reports. The babies were separated into different units in order to ensure they both received proper and immediate medical care.

Doctors had told Hough and the babies’ father Chris Carey that baby Neve was not likely to survive the pregnancy. Her placenta was deteriorating and as a result, she was not receiving adequate nutrients. Hough said it was “terrifying” to think about possibly losing her baby girl.

But despite the concerns about her health and survival, Neve was born healthy and able to breathe on her own. She only weighed one pound, seven ounces. Her brother Louie weighed over three pounds, but one of his lungs collapsed during delivery and he required medical treatment to fix it.

When the two were reunited, they began holding hands, which Hough said left her “filled with love” and made it “the best day of my life.”

“To go from fearing that Neve wouldn’t make it to seeing them both cuddling and holding hands — there are no words,” she said. “When they told me that Neve wasn’t going to make it, I couldn’t think straight. It was so difficult and so scary because I was so excited to meet them but I was so worried if they were going to be OK. When they were born it was a massive relief, I couldn’t have been happier.”

It was an “incredibly emotional” day for Carey as well and the couple can’t wait to bring their babies homes, which is likely to be after their original due date in May.

“It was horrible when they were separated at birth but I cried tears of joy when they got back together,” said Hough. “They were wrapping their legs around each other and cuddling, even holding hands at one point. They were so cute.”

The couple is grateful to the hospital staff, whom they called “absolutely brilliant” for working to save both babies’ lives, even when they didn’t believe Neve could survive.

“[The babies are] unbelievable,” said Hough. “They’re so strong I couldn’t be more proud.”