Pro-abortion organizations have long argued that abortion should be “between a woman and her doctor.” But today, the abortion industry has put this notion on the back burner with its full-throated endorsement of do-it-yourself, at-home abortions. Few have been more vocal about the “demedicalization” of abortion than abortion industry insider Dr. Daniel Grossman.

At-home abortions have been years in the making

During the COVID-19 pandemic, the abortion industry has amped up its message that at-home abortions are what women need. As abortion businesses in some states were forced to close and began losing money, Dr. Grossman stated on Twitter and in Rewire News that the goal is to “move abortion away from a clinic-based service” into homes, for a “much more private experience.” 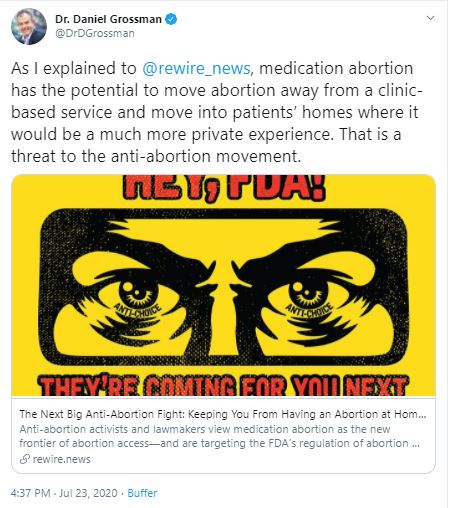 In 2018, Grossman tweeted his belief that the industry should “focus our efforts on making medication abortion pills over-the-counter, and support those who decide to manage their own abortions….” (emphasis added). Grossman is the director of Advancing New Standards in Reproductive Health (ANSIRH) at the University of California, San Francisco (UCSF), and a Senior Advisor at Ibis Reproductive Health, an organization working to make abortion “easy to access” and “available without unnecessary medical requirements or legal impediments.” Grossman is also an abortionist and abortionist trainer with connections to the funders of the abortion pill’s manufacturer, Danco.

When it comes to the abortion pill, there are currently multiple methods for dispensing it, including Telemed/Telehealth/Telemedicine Abortion, “No-Test” Abortion, and the method currently in a clinical trial known as TelAbortion. However, a federal judge recently suspended the FDA’s in-person requirement for dispensing the abortion pill. That suspension will be in place for as long as the COVID-19 pandemic lasts, which is an undetermined amount of time.

As previously reported by Live Action News, a “no-test” or “demedicalized” abortion allows abortion businesses to prescribe the abortion pill without actually seeing the patient in person, without performing any tests or examinations to rule out potential complications such as ectopic pregnancy. There is no true doctor/patient relationship in this scenario, as Live Action researcher Carole Novielli states:

Now, with the advent of DIY abortions, health professionals and facilities will be replaced by pharmacists, postal carriers, and questionable online websites. When the dust settles, the “abortion is health care” façade will fade as the public realizes abortion was never about medicine. 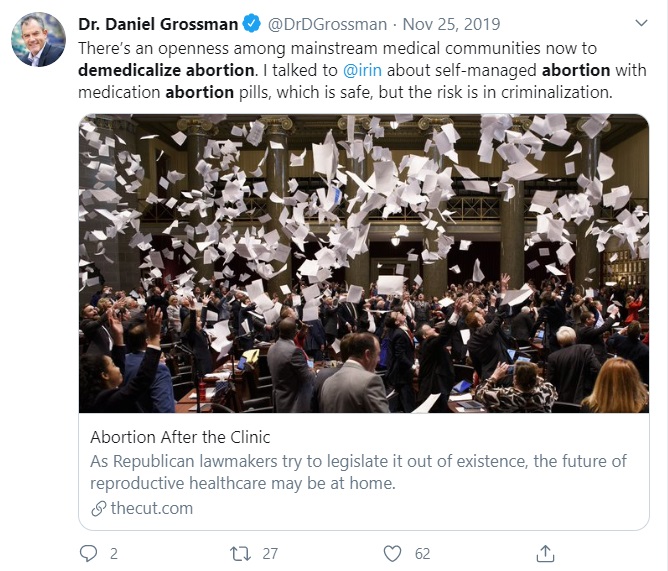 In reality, an expansion of the abortion pill is only good for the abortion industry. Pushing to deregulate mifepristone puts women at great risk. Under “demedicalized” abortion, women are at risk of taking the abortion pill while experiencing undiagnosed ectopic pregnancies, which could be fatal. Women who take the abortion pill without knowing whether they might be Rh-negative are risking the lives of future children. A woman might be much further along in pregnancy than she realizes, which increases her risks as well. She could hemorrhage at home alone.

All of these situations are dangerous for women, yet the abortion industry benefits financially from a faster turnover rate of patients whom they never have to actually see in person — much like the industry’s current reputation for rushing women through surgical abortions “like cattle.” 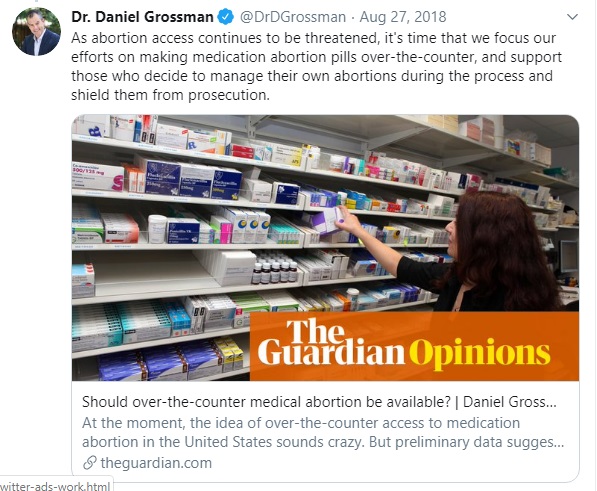 Grossman has previously pointed to the UK as a prime example of a successful at-home abortion protocol, but since the “Pills-by-Post” program began mailing the abortion pill to women in March 2020, two women have died from taking it, and a 28-week-old baby (the abortion cut off in the UK is 24 weeks) was born alive and then died after her mother took the abortion pill at home. It is currently only allowed to be taken up to 10 weeks. The UK has shown that at-home abortions are extremely risky.

In addition to being unsafe physically, at-home abortions could be detrimental to women’s mental and emotional health. Aborting at home means a woman now bears the burden of disposing of the body of her deceased child and may see her child’s formed body and features, which could be traumatic. One mother said:

I knew to expect blood clotting, but nothing could’ve prepared me for seeing her body. It was the color of my own skin and was actually starting to look like a person. There was nothing I could do except flush. Now that the physical pain is over, that will haunt me for the rest of my life.

Elisa Wells, co-founder of Plan C, a website that instructs women on how to skirt laws to do DIY abortions, told Rewire that at-home abortion pill use is the future of abortion. She said pro-lifers “didn’t understand the degree to which it’s a transformative technology, especially when combined with the internet and with our global commerce system. They’re clearly concerned because they see the promise of the [abortion pill] to make abortion accessible to those who need it.”

While countless women have been helped thanks to pro-life sidewalk counselors, at-home abortions are not a “threat” to pro-lifers. Pro-life sidewalk counselors don’t benefit financially from helping women to choose life. And yet, pro-lifers are concerned, because at-home abortions are a threat to the women who take the abortion pill, and to the preborn children who will needlessly die.

In the 1960s and 70s, Americans were sold the lie that abortion had to be legalized in order to end dangerous do-it-yourself abortions. Now it’s clear that this was never true. There is no other so-called “medical procedure” that women are expected to commit on themselves at home without medical supervision. The façade of abortion as “health care” that should be “between a woman and her doctor” is fading.