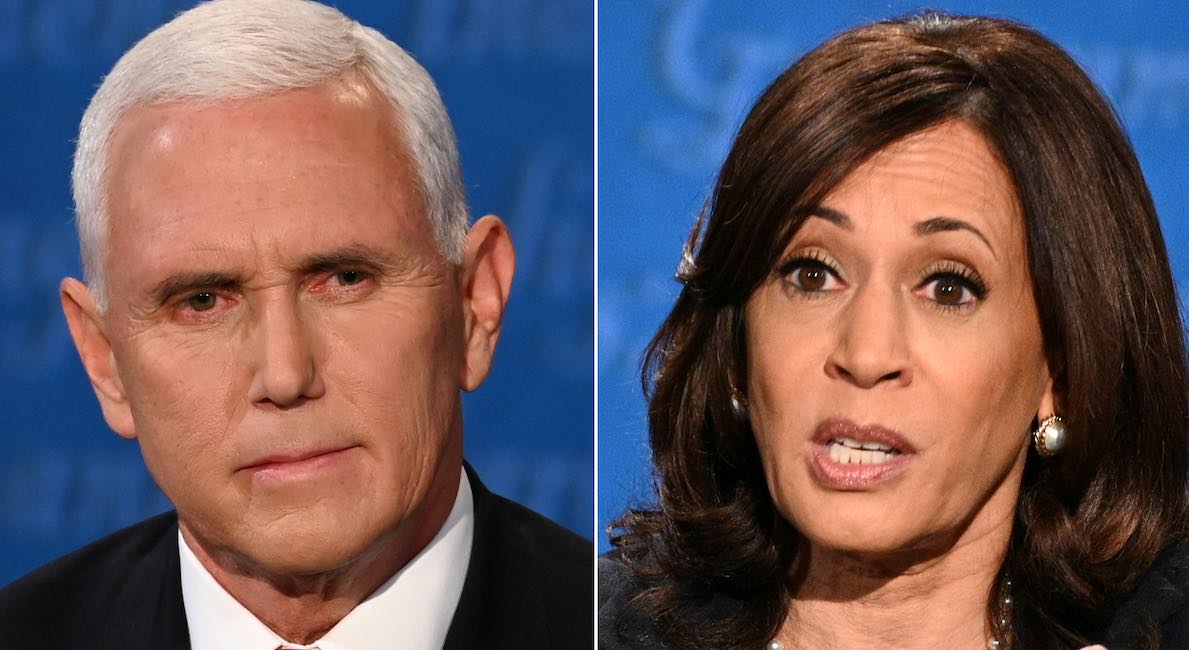 Page asked each candidate what they would want their respective home states of Indiana and California to do in the event Roe v. Wade is overturned by the Supreme Court, especially after President Trump’s nomination of Judge Amy Coney Barrett to replace Ruth Bader Ginsburg on the Court.

Harris said, “I will always fight for a woman’s right to make a decision about her own body. It should be her decision.”

Pence also warned against religious litmus tests for federal judges who are affiliated with religious groups that oppose abortion. “We hope she gets a fair hearing,” Pence said of Barrett. “And we particularly hope that we don’t see the kind of attacks on her Christian faith that we saw before.”

Pence alluded to Barrett’s 2017 confirmation hearing before the Senate Judiciary Committee when she was nominated to the US Court of Appeals, specifically when Harris’ colleague from California, Dianne Feinstein, told Barrett the dogma of the Catholic faith, “lives loudly within you, and that’s a concern.”

At the time, many accused Feinstein of imposing a religious litmus test on a Catholic judge, due to the Catholic Church’s opposition to abortion. Feinstein told Barrett she had an “uncomfortable feeling” that Barrett would let Catholic dogma control her judicial philosophy, and said she assumed Barrett would be a “no vote on Roe.” Barrett responded that she would have “no opportunity” to overturn Roe as a judge on the US Circuit Court and she would “faithfully apply all Supreme Court precedent.”

Harris, who serves alongside Feinstein on the judiciary committee, joined Feinstein in voting against Barrett’s 2017 nomination. The two California senators also opposed the 2019 nomination of Judge Brian Buescher, raising concerns over his affiliation with the Knights of Columbus—a Catholic fraternal organization with over two million members.

Harris challenged Pence’s assertion that she would impose religious tests. “Joe Biden and I are both people of faith,” she said. “And it’s insulting to suggest that we would knock anyone for their faith, and in fact, Joe if elected will be only the second practicing Catholic, as President of the United States.”

Pence stopped short of guaranteeing Judge Barrett would overturn Roe v. Wade if appointed to the Supreme Court, saying he would “never presume” how Barrett might rule.

Pence also criticized Harris and Biden’s support for taxpayer-funded abortion, “all the way up to the moment of birth, late-term abortion,” claiming she and Biden would, “increase funding to Planned Parenthood of America.”

During Buescher’s confirmation hearing, Harris submitted questions for the record probing him about whether he agreed with the Knights of Columbus’s position on defunding abortion providers: “Reproductive health providers who receive Title X funds provide a critical service to women. Do you believe federal funds should not be given to these providers who support abortion services?” She also asked that Buescher give assurances that he would, “deal with reproductive rights and abortion issues fairly and impartially” as a federal judge.

Article VI of the US Constitution prohibits religious tests as a qualification for holding public office in the United States.