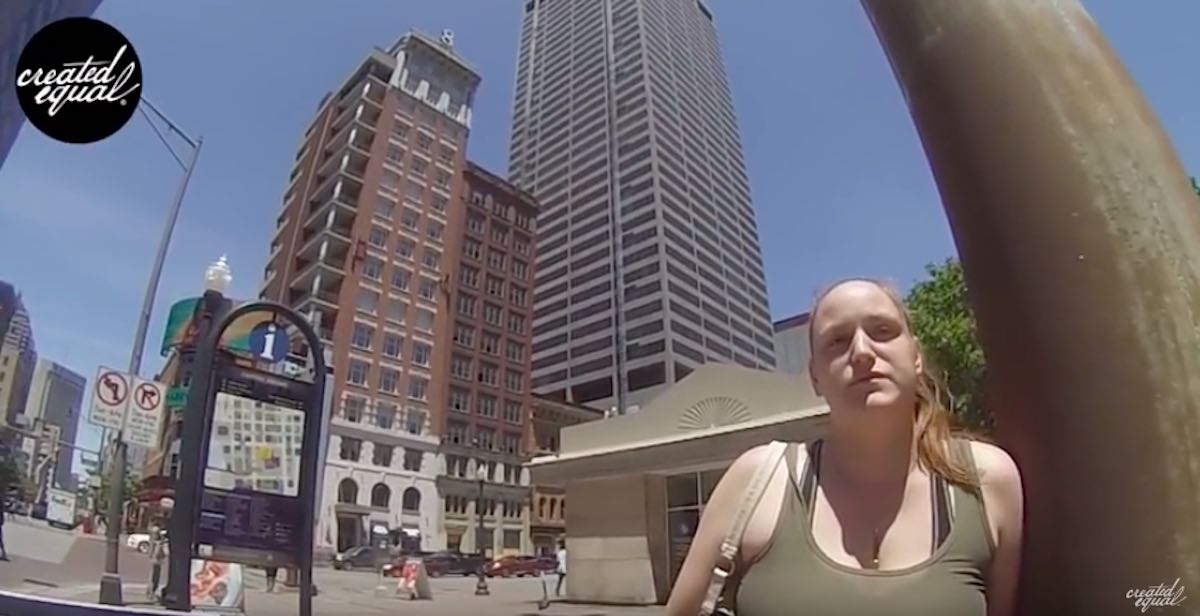 In a truly enlightening new video from the pro-life group Created Equal, a woman walks by a display of abortion victim images and deliberately flips over one of the large signs. But suddenly, as she walks toward another sign, she seems to have a change of heart. What results is a surprisingly respectful conversation between two people about the pro-life position:

“I apologize for knocking down your sign,” says the woman, after noting that the photos of abortion victims are difficult to look at. “I’ll pick your stuff up.”

She then asks, “You guys don’t stand outside the clinics, do you?” When Gabriel from Created Equal says, “We are, yeah,” she shakes her head, saying she has seen people outside an abortion facility with the same sign telling people that they’re “going to hell.”

“No, we don’t ever do that. We don’t want to say anything hateful or condemning to anyone,” Gabriel replies. “Even though I believe that abortion is wrong, I know many people in my life who have had abortions — people in my family, people that go to my church. We don’t hate or judge or condemn them.” He says when they go to abortion facilities, they show abortion victim images and pictures of babies alive in the womb, and that they offer help, resources, and information on local pregnancy resource centers to women.

“We want to be there to let women know that despite the crisis… There is help; abortion isn’t your only choice…. We want to be there because we know abortion does kill a human being,” he says, adding that it also hurts men and women. There is forgiveness and hope for those who have had abortions, he notes.

Angel, as she later introduces herself, says her friends are abortion facility escorts, and apologizes to him again for knocking down his sign.

Gabriel then asks Angel why she supports abortion. She says she’s never had one. “I’m a Christian, so in my eyes, once you’re pregnant… you know… but you still have to support a woman’s right to choose.”

The conversation continues, and Gabriel reveals that the issue of life in the womb is a personal one for him:

I don’t think she had a right to kill my sister…. to harm my sister’s body. I think they both had rights to their own body.

We don’t want to take away rights from women…. We all have a right to our body, but our rights end when we want to use our body to hurt somebody else’s body.

“It makes total sense, which is why it’s so conflicting for me,” Angel says. “Because it makes perfect sense. But at the same time, the adoption rate is very low. The likelihood of that baby actually being adopted is slim to none,” she claims. However, it seems she is under the false impression that if a mother cannot raise her child, then that child automatically goes into foster care. This isn’t the case, as during their pregnancies, many women hand-select families to adopt their children, and receive various forms of assistance from the adoptive family during the pregnancy. Many birth mothers even maintain contact with their children through open adoption, should they choose to do so. Two million couples are waiting to adopt every year.

Gabriel also addresses Angel from a Christian perspective. “Knowing scientifically it’s a human being… and human beings are made in [God’s] image and we should’t kill those who are innocent — if that’s what abortion does, how can you still support it?”

“Then, do you oppose abortion?” Gabriel later asks.

“I would never personally get one. It’s really just respecting a woman’s right to choose….” Angel says, with hesitation. “But the whole thing is like, ‘You can’t choose to murder someone else.’… I’m having a very hard time having this conversation….”

If we look at the action of abortion, the action itself is wrong… We shouldn’t allow anyone to do it, not because we want to control people but because we want to protect the innocent people who would be hurt…. If a police officer said… ‘I’m against police brutality, but if other police officers want to hurt innocent people, I can’t stop them from doing that. That’s their choice.’ You would say that’s wrong…. you shouldn’t do that yourself but you shouldn’t let other police officers do the same thing…. Just because me and my wife wouldn’t have an abortion… that’s not enough, because if abortion does kill innocent humans, who deserve their basic rights then we shouldn’t let any parents to do that to their children… so I think we have to decide ‘What does abortion actually do, and is that wrong? Does it hurt innocent people, and if it does, we should all oppose it.

This is the kind of conversation our society needs to have about abortion, with less screaming and more dialogue from both sides. Created Equal wrote in an email, “Since the beginning of 2019, 702 individuals have changed their mind on the spot while talking with our team. What makes the difference? Images of the victims paired with our team members creating respectful dialogue.”