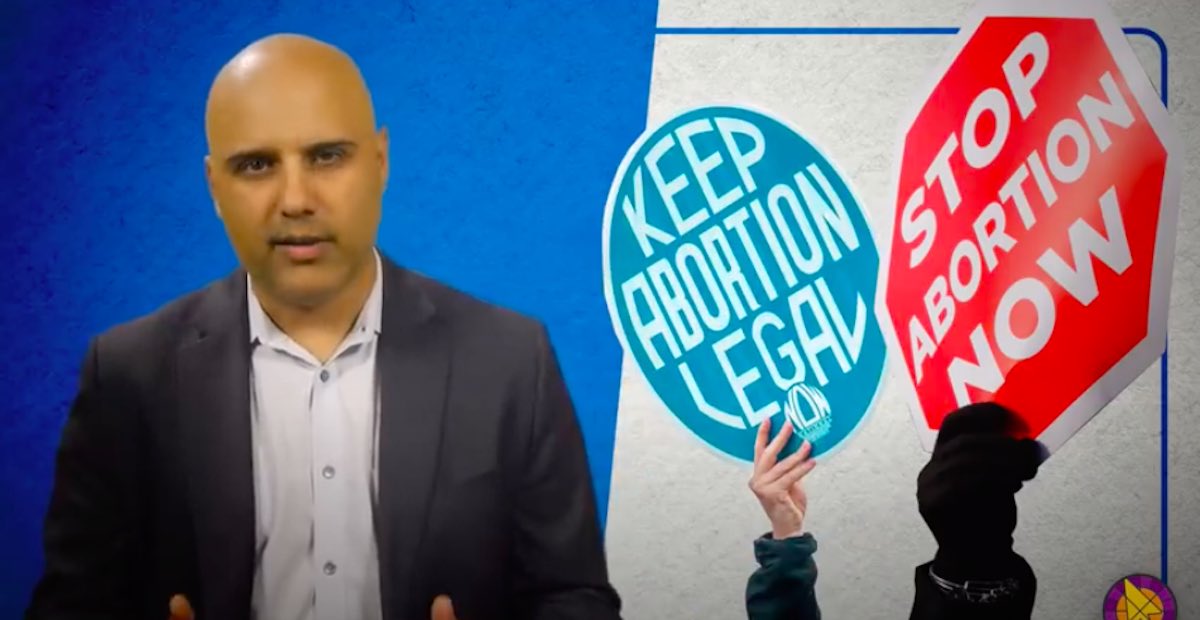 A popular video about abortion recently released by Phil Vischer (co-creator of VeggieTales) and his podcast co-host Skye Jethani needs some fact checking. The “What About Abortion? Should this one issue determine how Christians vote?” video never discusses whether there are other political goals that would do more to save lives and promote the common good than protecting preborn children. It also fails to discuss whether pursuing other political goals necessitates that Christians should sacrifice a vote to protect human beings before birth.

Instead, the video minimizes the role of a president in protecting the preborn and the importance of Constitutional protections for the preborn – and it does so with false information and poor arguments.

False idea: “Focusing on abortion” is a new thing for Christians.

In its very first sentence, the video presents the false information that “the early 80s” was “when evangelical Christians first started focusing on abortion.” Opposition to abortion is not a modern evangelical fad. One of the very first documents of Christian teaching outside the Bible itself, the Didache (dated to the first century) says, “You shall not murder a child by abortion nor kill a child at birth.”

The video later claims that restrictions on abortion did not begin appearing until fairly recently in history. This is false. In 1868, the states widely recognized preborn children as persons. Nearly every state had criminal legislation prohibiting abortion and at least 28 jurisdictions labeled abortion as an “offense against the person.” At least nine states explicitly valued the lives of the preborn and their pregnant mothers equally by providing the same range of punishment for killing either during the commission of an abortion, and at least 10 states considered abortion to be either manslaughter assault with intent to murder or murder.” In 23 states and six territories, laws referred to the preborn individual as a “child.” And the same Ohio legislature that ratified the Fourteenth Amendment called abortion “at any stage” nothing less than “child murder.” Less than 100 years after our nation’s founding, nearly every state understood “person” to include prenatal life.

False idea: Who Christians vote for as president doesn’t really matter when it comes to abortion.

The video also presents this idea: “For years, Christians have been told that who you support for president will either save or sacrifice the lives of unborn babies. This has led a lot of pro-life Christians to become single issue voters willing to overlook everything else about a candidate as long as they’re against abortion….” The video states the argument for being a “single issue” pro-life voter assumes “the president nominates justices to the Supreme Court, the Supreme Court can overturn Roe v. Wade, and overturning Roe will make abortion illegal and save babies.” But this is an inaccurate description of the argument – a straw man fallacy, “in which an opponent’s argument is overstated or misrepresented in order to be more easily attacked or refuted.”

False idea: Roe didn’t really do all that much.

The video claims, “the Roe decision did not legalize abortion and simply reversing Roe wouldn’t make it illegal.” But Roe forced every state in the union to allow abortion and struck down the vast majority of states’ abortion restrictions.

Even the late Ruth Bader Ginsburg, one of the most pro-abortion Supreme Court justices, said, “[Roe v Wade] is an unusual judicial decision because it made every [abortion] law in the country — even the most “liberal” — unconstitutional in one fell swoop. And that’s not the way the Court ordinarily operates.” Overturning Roe would return the issue to the states to legislate again, as they did before Roe. Therefore, many states could indeed choose to make abortion illegal.

False idea: The number of abortions before Roe were about the same as today.

The video then makes a slew of incorrect and unsourced claims about the number of abortions before Roe and more, and ignores the massive spike in abortions that took place after Roe v. Wade. Notably, the video claims that even though many states had pro-life laws, doctors were still committing an estimated 800,000 abortions per year, asserting, “That’s about the same number that’s happening today.”

Dr. Michael New of the Charlotte Lozier Institute also debunked many of the video’s claims in the video in a thread on Twitter, shown in the screenshots below.

New noted that “Evidence from the past 40 years shows electing pro-life candidates has helped reduce the U.S. abortion rate by over 50%,” and that “Republican-appointed Supreme Court judges have upheld a variety of life-saving pro-life laws.” 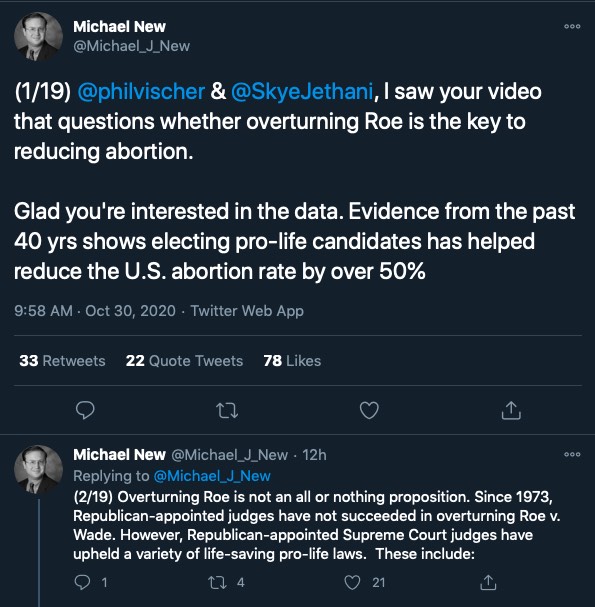 Some of those laws, noted New, are “public funding limits on abortion, parental involvement laws, informed consent laws, waiting periods, [and] partial birth abortion bans.” He added that “… [J]udges appointed by Democratic Presidents almost always vote to strike down these common-sense, life affirming, pro-life laws.” In addition, he pointed out how “incremental pro-life laws reduce abortion rates and save lives,” and how the Hyde Amendment “prevents the federal government from funding elective abortions through the Medicaid program,” which also reduces abortion rates. 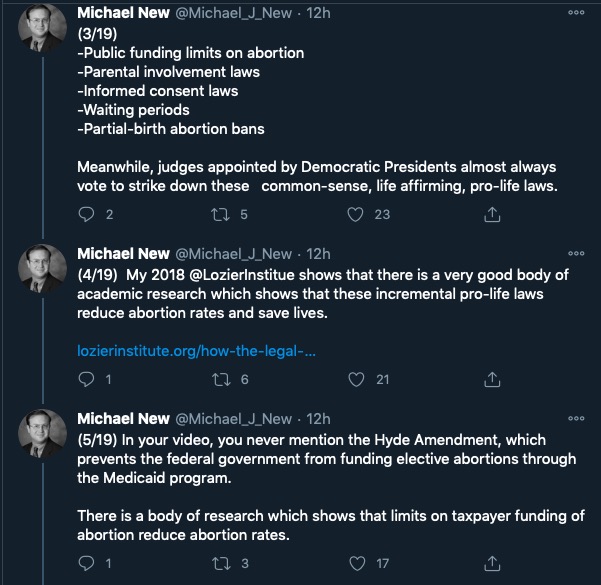 Hyde, New tweeted, “saves over 60,000 lives a year.” He also noted that while “abortions were taking place before Roe v. Wade… the evidence clearly shows that Roe v. Wade dramatically increased the abortion rate in the United States.”
“According to the CDC,” he wrote, “in 1972, the year before Roe v. Wade, there were just under 600,000 abortions performed. By 1980 — just seven years after Roe — there were almost 1.3 million abortions. This is an increase of over 121% in just eight years!” 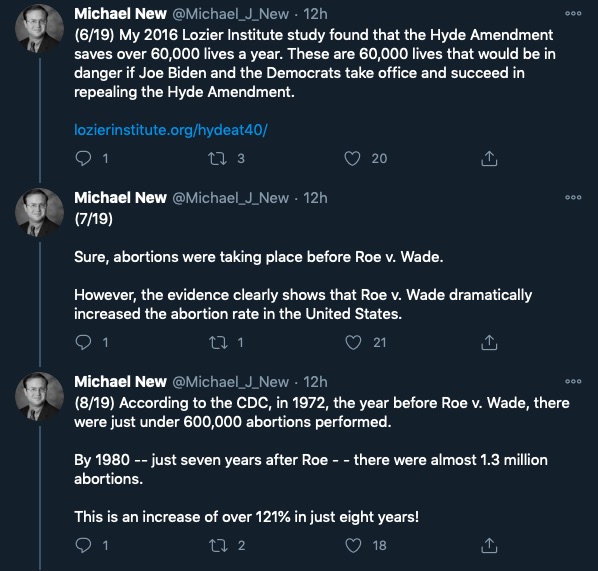 New called the video’s claims comparing abortion rates in Texas and Delaware – two vastly different states politically-speaking – “misleading,” noting that a “big reason” for Delaware’s abortion rate decrease was because “in 2016 an abortion facility owned by… Steven Chase Brigham was shut down” as was “the Wilmington, DE Planned Parenthood… in 2013.” 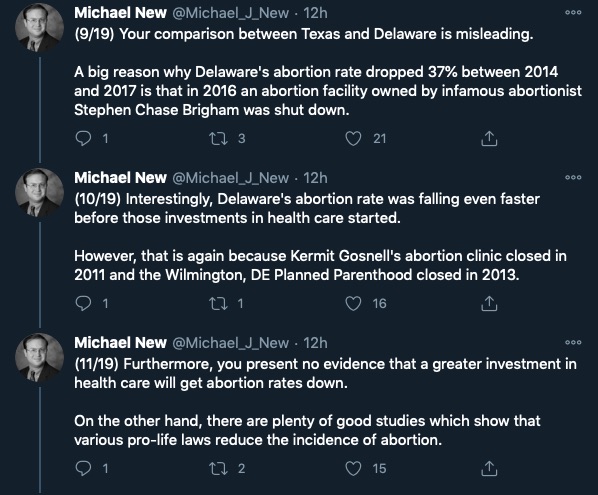 He noted that the video creators “present no evidence that a greater investment in health care will get abortion rates down,” yet “there are plenty of good studies which show that various pro-life laws reduce the incidence of abortion.”

New also noted that claiming abortion rates decline under Democrat presidents is “also misleading,” a claim he previously debunked here by showing that the abortion rate has dropped consistently since 1980, regardless of the president’s political party, in no small part thanks to state-level pro-life laws. 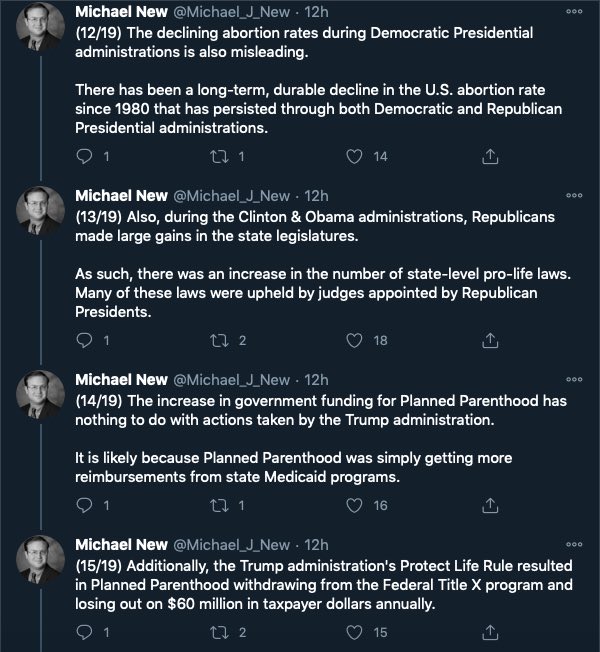 New notes that Planned Parenthood has been receiving increased funding not because of the Trump administration, but due to increased reimbursements from state Medicaid programs, as noted in this Live Action News article.

New also noted, “The main reason why abortion rates are falling is not because there are fewer unintended pregnancies. In fact, the unintended pregnancy rate has fluctuated since 1981. An important reason is that a higher percentage of unintended pregnancies are being carried to term. This shows the pro-life educational, service, and yes, legislative efforts have all been effective at reducing the incidence of abortion.” 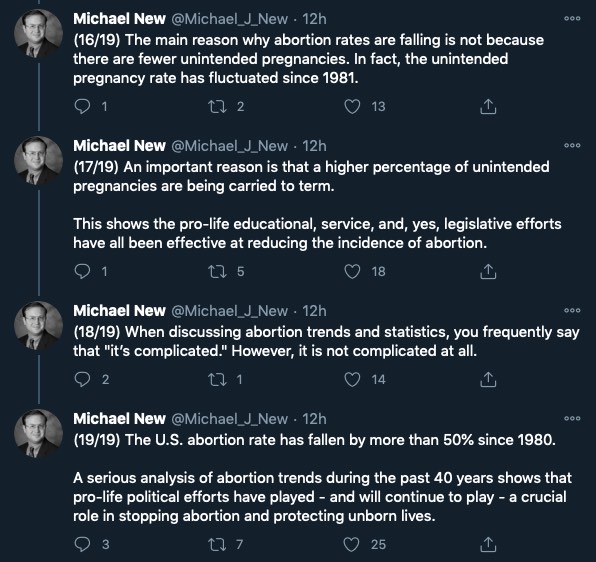 New noted the video “frequently” claims “discussing abortion trends and statistics… [is] ‘complicated.'” New says it isn’t, stating as proof, “The U.S. abortion rate has fallen by more than 50% since 1980. A serious analysis of abortion trends during the past 40 years shows that pro-life political efforts have played – and will continue to play – a crucial role in stopping abortion and protecting unborn lives.”

New, an expert in statistics and the pro-life movement, easily dismantled Vischer’s video, which was poorly researched. The fact is that abortion is a human rights issue, not a religious one. And yet, people of faith have the opportunity to take action to help stop this horrific human rights violation through serving mothers and babies in their communities, and also through involvement in the political process.

Efforts to halt the literal slaughter of human beings in the womb through political means should never be downplayed, especially not by those speaking as purported followers of Christ.