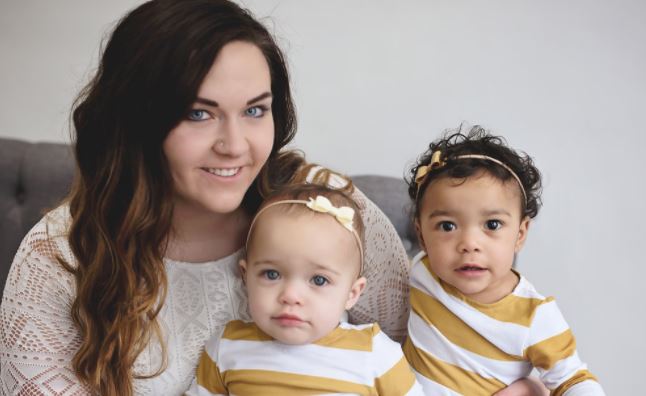 (Pregnancy Help News) – When Kelsey learned she was pregnant as a 21-year-old business major, her pro-life stance was put to the test. Raised in a Catholic family, she had always been pro-life and would never have considered an abortion. But now that she was pregnant and facing pressure from her boyfriend to resort to abortion, her convictions weren’t nearly as powerful as the anxiety all around her.

Amid the stress of her situation, Kelsey reluctantly checked out Planned Parenthood’s website to price out an abortion. As she looked online, however, Kelsey stumbled upon Pregnancy Resource Center of Rolla’sadvertisement for free pregnancy tests and free ultrasounds.

She reached out, and the next day, she was in their office—halfway between St. Louis and Springfield, Mo.—and speaking to a peer consultant named Pam.

“I still remember vividly my first appointment at PRC with Pam,” Kelsey recalled in a recent speech at PRC of Rolla’s banquet on campus at Missouri University of Science and Technology. “We’d made it through her list of questions—barely, from the amount of crying I was doing on my part—and I took a pregnancy test which, of course, came back positive. When speaking about my options, I remember telling her there was no way I could take care of a baby. I was still in college and had so many opportunities ahead of me.

“This wasn’t supposed to happen to me. My parents had raised me in a manner so that I didn’t end up pregnant at 21 like my mom had been with me, and here I was pregnant at 21. Honestly, at that moment I felt like a failure.” 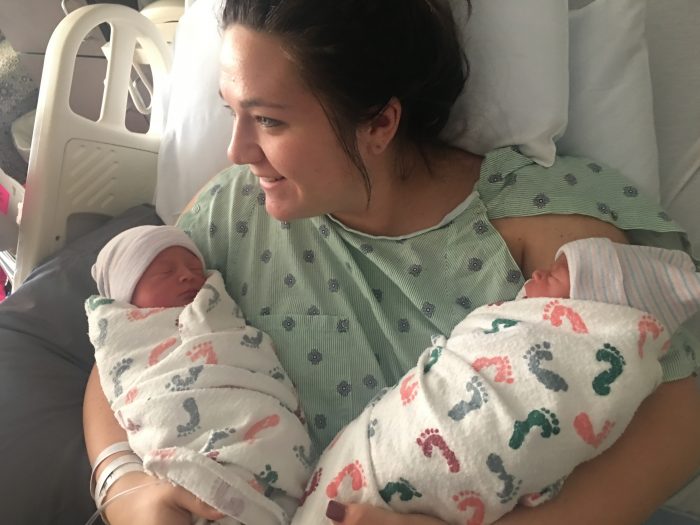 Kelsey and her twin girls at birth. Kelsey refused abortion for her girls with help from a pregnancy help center.

In that first meeting, Kelsey told Pam that she felt she had no other choice than abortion, especially since the father of her child had been pushing her toward it. At the same time, however, Kelsey felt instinctively that she would ever be able to live with herself if she did have an abortion.

Pam told her to take her time and think over her options—including placing her child into the arms of an adoptive family—until after she received her first ultrasound.

After continuing to research abortion, Kelsey returned to PRC of Rolla for her free ultrasound. During the ultrasound, the center’s client services director, Jane Dalton, pointed at the screen to ask Kelsey if she knew what she was looking at.

To Kelsey’s surprise, she was pregnant with twins.

“At that very moment I’m pretty sure my heart stopped, my jaw dropped to the floor, and my eyes got as big as they could,” Kelsey said. “I was freaking out about just one baby and now my worries had doubled.”

While Kelsey tried not to panic, Jane and Pam reassured her, telling her that her family was going to be thrilled she was having twins. Still in shock, Kelsey remembers one remarkable moment from that appointment: hearing the babies’ heartbeats for the very first time.

“It was an indescribable moment for me,” Kelsey said. “I believe it was the moment I unconsciously decided I could never get an abortion.”

Kelsey continued to return to PRC of Rolla for ultrasounds and with each appointment, she became more and more excited about her pregnancy and twin babies. Pam sent text messages to check on Kelsey in between appointment—something Kelsey said let her know that someone was there for her when she felt no one else was. 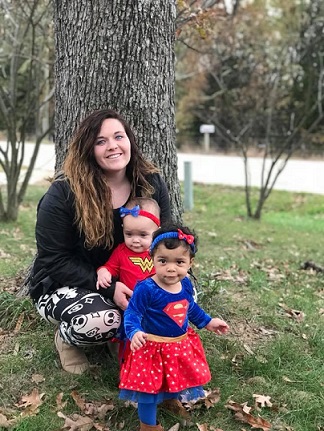 Kelsey and her twin girls in super hero outfits. The girls are alive today thanks to a pregnancy resource center.

After four ultrasounds and eight appointments at the center, Kelsey told the team she was choosing life for her babies.

“She loved the coaching,” Dalton said. “She loved being able to express herself without being judged. Without that coaching Kelsey would not have continued to come back to us and I honestly believe those babies could have been lost to abortion.”

By 15 weeks gestation, Kelsey was ready to tell her parents and sister the news of her pregnancy—overcoming her long-held fear of disappointing them. When it came time for the 20-week ultrasound at her OB-GYN, her mother and sister were both there with her to learn that both twins were girls.

“I was in love from the moment I laid eyes on both of them,” she said. “They are such a blessing in my life and bring so much joy to myself and the rest of my family. I thank God often for my girls and for PRC who saved me and my pregnancy.”

All told, Kelsey only took a week off school, before heading back to class following Thanksgiving break. She’s planning to graduate on schedule in December.

For Joe Dalton, the center’s executive director (and husband to Jane), Kelsey’s story is a prime example of the abortion industry’s common lie that a woman must choose between her child’s life and her own success.

“That’s a lie that Planned Parenthood has pushed out there forever,” said Dalton, who’s seen over 2,300 mothers choose life since he helped start the center in 2007. “She bought it hook, line, and sinker. That was our biggest hurdle.” 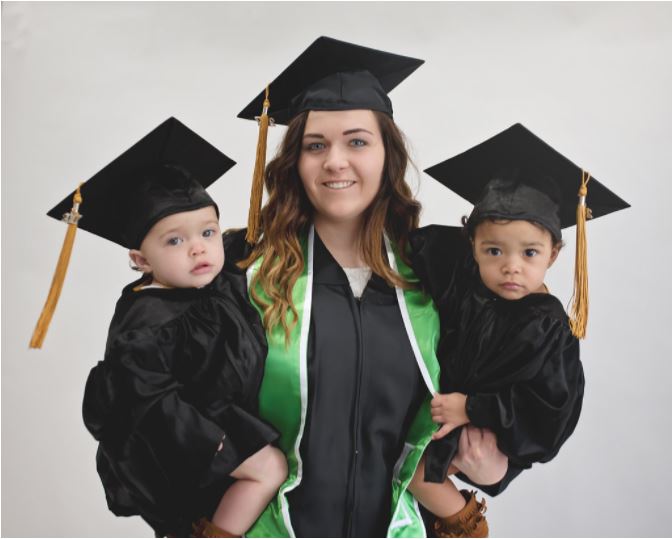 Kelsey and her twin girls are ready for graduation in their caps and gowns. Kelsey refused abortion with help from a pregnancy help center.

Just after graduating this December, Kelsey has plans to tell her story to her elected representatives as part of Heartbeat International’s annual Babies Go to Congress event Jan. 18 in Washington, D.C. At the event, which Heartbeat International has hosted since 2009, Kelsey and the girls will have a chance to not only tell, but show off the positive work of pregnancy help centers.

In the past nine years, over 150 mothers—along with their children—have visited a total of 315 congressional offices to tell their story to both Democrat and Republican lawmakers. Along with creating powerful moments where women are empowered to tell their stories to elected officials, the event also allows pregnancy help leaders to shed light on their approach to serving women who face unexpected pregnancies.

“We share the simple truth with them that they have plenty of time to decide. There’s no hurry,” Dalton said. “This is a decision that will affect you for some time to come so you have to make sure you get this right. After all, this is a life or death situation so we encourage them to slow down and give themselves the gift of time.”

This article was originally published at Pregnancy Help News and is reprinted here with permission.