Without aborted fetal cells, there would be no hope to cure some diseases — or so we’re told. Of course, what abortion advocates always neglect to add is that fetal tissue has yet to cure any disease, while adult stems cells and other therapies have made inroads into that arena. Because of this, claims about the necessity of fetal tissue are losing more credibility each year, and a new scientific discovery from researchers at Lund University in Sweden renders even the loudest or arguments void.

Not all stem cell research is unethical or relies on abortion to make positive scientific discoveries, as Live Action News has previously reported. Placenta and umbilical cord stem cells have been used in research, as have adult stem cells (where the most promising research has been seen, resulting in treatments for diseases). Despite this, those who advocate for stem cells from fetal tissue try to justify abortion by arguing that lives may be saved through the (still unsuccessful) use of this tissue for research.

Some organizations that purported to be close to cures using fetal stem cells are now closing down because their results prove fruitless; nevertheless, those connected with the abortion industry have continued to champion the cause of these aborted fetal cells.

In the House Select Panel on Infant Lives’ first hearing on the fetal tissue industry’s actions, Lawrence S.B. Goldstein, PhD, a professor in the Department of Cellular and Molecular Medicine at the University of California, San Diego School of Medicine, who has ties to Planned Parenthood, testified that the need for this fetal tissue is absolute. Goldstein testified that to not have it would basically amount to doing injustice to society:

My message is simple: fetal tissue and cells that would otherwise be discarded play a vital role in modern cutting-edge medical research. These fetal tissues and cells cannot be replaced by embryonic stem cells, reprogrammed stem cells, or adult stem cells. These other cell types do not make astrocytes with identical properties as those from fetal sources.

Goldstein’s comments sound compassionate until you realize this truth: We’re purposefully disposing of human beings we deem unwanted, hoping we can use their remains to fix the diseases of others. Goldstein’s summary comments are striking as well:

[R]esearch with fetal tissue and cells that would otherwise be discarded is ethical, valuable, and vital to ongoing biomedical research projects. If we do not continue to use this tissue that is destined for discard, we forego the ability of researchers to continue to make timely and significant progress in mitigating if not eliminating devastating diseases like Alzheimer’s and improving the quality of life of many people in the future.

However, despite Goldstein’s assertion that disease cures hinge on only those cells that come from aborted babies, he and his friends at Planned Parenthood would do well to have a talk with Niels-Bjarne Woods, Ph.D., Associate Professor of Molecular Medicine and Gene Therapy at Lund University in Sweden. Woods and his team of researchers and clinicians have found that the answer for obtaining potentially curative cells lies not in aborted babies but in the amniotic fluid that comes from Cesarean (C-section) deliveries. Lund University released this news in December:

Amniotic fluid, the protective liquid surrounding an unborn baby, is discarded as medical waste during caesarean section deliveries. However, there is increasing evidence that this fluid is a source of valuable biological material, including stem cells with the potential for use in cell therapy and regenerative medicine.

The new method is used in combination with full-term caesarean section deliveries, and with millions of caesarean sections performed worldwide each year, it opens the potential for an unexploited reserve of stem cells and valuable bioactive molecules in the fluid surrounding the baby to be utilized.

This “multi-step method” will include “a unique collection device and new cell harvesting and processing techniques, that enables term amniotic fluid to be safely harvested for large quantities of cells.”

Much ado has been made about the potential of fetal cells because of the type of cells they are. One study noted:

Now Woods and his team have found that the amniotic fluid cells can actually be converted “to an embryonic-like stem cell state,” which can then “potentially give rise to all different cell types of the body, including neural cells, blood cells and heart cells, among others.” And the fact is, that’s where the real help is coming from anyway. 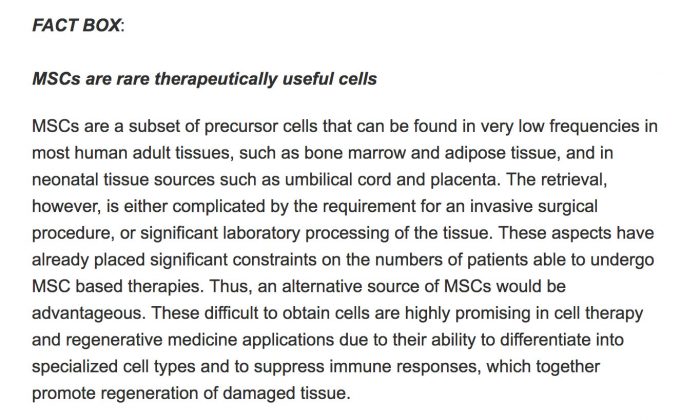 One of the Lund University study’s researchers, clinician Dr. Marcus Larsson, discussed the way this finding could transform medicine:

The combination of this novel device and the coupled cellular selection and cultivation methods could be transformative for the stem cell field, as large quantities of newborn-MSC’s can be provided by utilizing this waste material. The safety standards we adhere to are also a central component for gaining clinical acceptance. The obvious next step would be to evaluate these cells further in the laboratory and, if successful, in disease models.

Now that we have demonstrated the feasibility to access this neonatal MSC source, our hope is that many more research groups will start working with these cells. This will accelerate our understanding of their full therapeutic potential.

Woods and his colleagues draw this conclusion from their research:

The potentially large donor base from caesarean section deliveries, the high yield of term amniotic fluid MSCs obtainable, the properties of the MSCs identified, and the suitability of the cells to be reprogrammed into the pluripotent state demonstrated these cells to be a promising and plentiful resource for further evaluation in bio-banking, cell therapy, disease modelling, and regenerative medicine applications.

Clearly, this does away with yet another excuse that Planned Parenthood and its partners like StemExpress, as well as other abortion facilities and fetal tissue procurement agencies, use in arguing for the need for research on aborted babies.

The facts are clear: Evidence for cures comes not from aborted babies but from other sources. Yet we are likely further from cures for some diseases because most funding goes to labs experimenting with the cells and organs of preborn babies killed for research instead of being routed to labs where real therapies have been developed.

Perhaps the Lund University research will hammer that point in a bit more deeply.