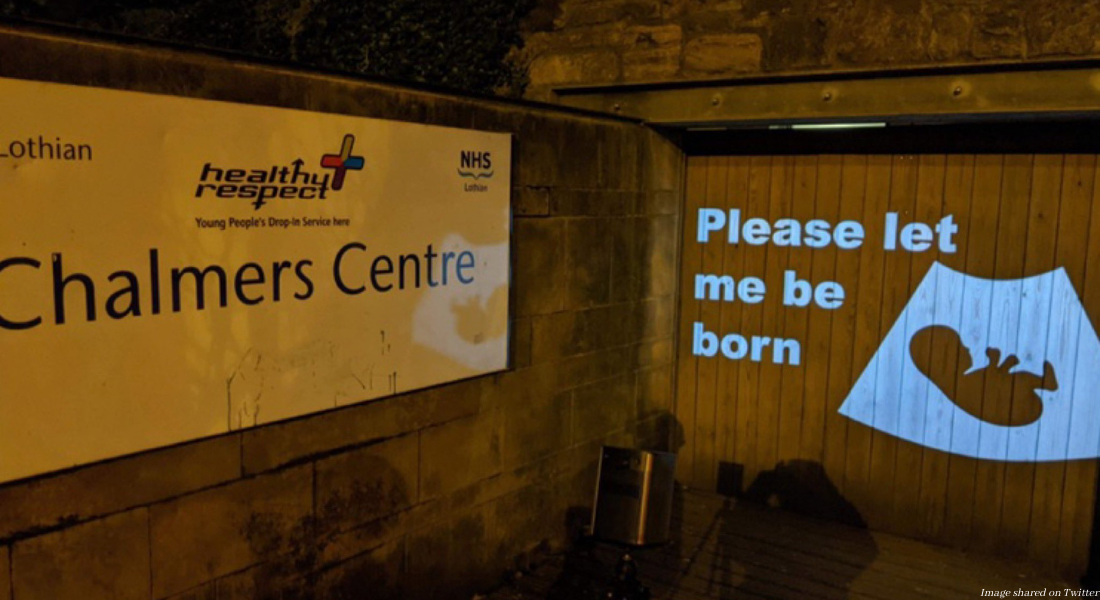 Abortion activists working to implement anti-free speech buffer zones in Scotland have labeled pro-life images projected onto the outside of an abortion facility in the country “sinister.”

The Scottish Family Party claimed responsibility for the images after being contacted by media. Images projected onto the Chalmers Sexual Health Centre in Edinburgh contained phrases like “Unborn Lives Matter,” “Please let me be born,” and “Who cares?” An image or outline of a preborn child was included with several of the slogans. But according to Back Off Scotland, a pro-abortion group lobbying for buffer zones around abortion facility, these phrases were nothing short of an attack on innocent women.

“If there were ever any doubts about the nature of pro life protests, these images showcase just how intimidating and sinister they can be,” Lucy Grieves, founder of Back Off Scotland, said to the Edinburgh Evening News. “The Scottish Government needs to address this immediately. This is a bipartisan, national issue about barriers to healthcare, and lack of action from our government means that they are failing those who rely on reproductive health services.”

Another woman, Alice Murray, who underwent an abortion at the Chalmers Sexual Health Centre, echoed similar rhetoric, saying, “These images are harrowing and a demonstration of the lengths that these protestors are willing to go to to harm abortion users well-being. These images may be very triggering for those who have had abortions.”

Yet for Richard Lucas, head of the Scottish Family Party, these were messages of love and compassion, not intimidation. “We can confirm that it was people from the Scottish Family Party who did them,” he told the Deadline News Agency. “Our pro-life message is a key element in our policies and we will continue to present it boldly throughout the election campaign. It is bizarre that anyone can describe these as ‘sinister’. They are just straightforward expressions of compassion toward unborn children.”

Scotland is already becoming increasingly hostile to pro-life activists; last year, abortion supporters launched Back Off Scotland specifically to prevent pro-lifers from reaching out to abortion-minded women. Even simply praying outside an abortion facility is said to be “intimidating,” and therefore, abortion supporters claim it should be illegal. Yet pro-life activists not only save the lives of preborn children but make a difference for the women they help as one abortion-minded woman said in response to Back Off Scotland’s campaign.

“Without the support offered outside the abortion clinic I would have had only one choice,” Sara told Be Here Now, explaining that she felt pressured into an abortion. “That is not really choice at all when there is only one choice. My baby girl would not be here today if I had not met the woman outside the abortion clinic. Now I have my baby girl and I am still getting support from the Good Counsel Network. It makes me angry to see people saying the help and support I was given outside the clinic should be banned. These people say that other people should not be allowed to offer help to women like me because that is harassment. They do not speak for me.”