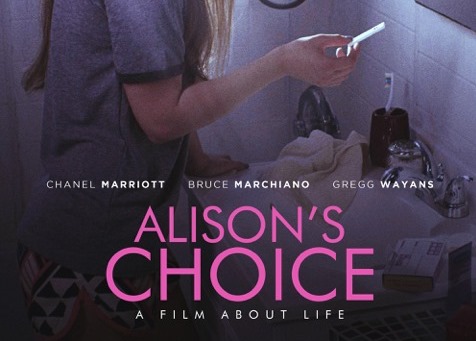 It’s not every day a low-budget Christian film unseats a major feature film at a city theater, but that’s just what happened with pro-life film Alison’s Choice. Though it was released almost a year ago, the film continues to gain momentum, so much so that its grassroots theatrical strategy resulted in kicking out a Hollywood film in February.

Live Action News first reported on Alison’s Choice last year. The film’s producer and writer, who also stars in the film, Bruce Marchiano, originally sought commercial distribution channels for the film, but found it a complicated web that ultimately hurt the immediacy of the message the film holds. As Live Action News reported in March 2016:

Marchiano has learned several lessons from trying to secure a distributor for this project, including a stinging one—that Christian filmmakers don’t necessarily want an overtly Christian film. He says: ‘Probably the biggest wake-up call in the hunt for distribution was an email I received from an acclaimed distributor of Christian movies. […] After screening the film, he emailed me: “Very powerful film that is sure to touch many lives, but it’s not a good fit for us.”‘

Stunned, Marchiano realized that while he thought it was about being a powerful film that affected many lives, the distributors were thinking with dollar signs.

“You go ahead and put a price on a baby’s life but I’m certainly not going to,” he said.

Marchiano’s wife reminded him that babies were dying while they waited for the right distributor, so he released it straight to DVD. In doing so, he launched a campaign to provide a free copy of the film to every Pregnancy Resource Center in the nation. He also worked to help churches and organizations schedule movie theater screenings of Alison’s Choice, and that’s where the film gained ground—through grassroots galvanizing.

In the past year, these screenings have appeared across the country. One of the most exciting screenings took place recently in Grand Rapids, MI, where the local Right to Life chapter organized an event that would boot out a traditional Hollywood flick to make way for the pro-life sleeper hit.

The Grand Rapids screening was organized by Grand Rapids Right to Life (GRRTL), led by Laura Alexandria, GRRTL’s Director of Operations, who called bringing the screening to the region “a happy adventure”:

When looking for ways to educate on the prolife issue, a hook, a unique perspective, or a new idea is needed.  People love to watch movies, and when they have an opportunity to support a good film and enjoy an evening out, that’s an incentive to purchase a ticket and head to the theater. 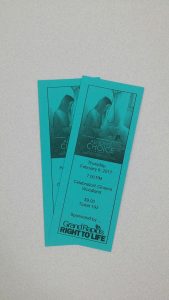 So GRRTL decided to buy every seat in one of the theaters at the Celebration! Cinema Woodland last month. They purchased them for $9 each and then sold them to the public for just $5.

“Movie theaters are happy to work with organizations as they have a guaranteed sell-out … and how many films can guarantee that success on a week night,” she said. “We viewed this as an opportunity to educate on prolife issues, and our supporters saw this as an inexpensive way to see a cool movie.”

She says it was easy to do because Marchiano was hands-on in helping them, providing marketing materials, and even promoting the screening on his own social media platforms. With materials in hand, they used their own grassroots methods: email, word of mouth, and newsletter and website articles. They also played up that the film was a “private screening,” and that it was a “one night only” chance. She explained:

We even created our own tickets that highlighted us as the sponsor and showed the original price of the ticket so that everyone understood they were getting a discount.  This evening was a great opportunity for our organization, too, as we were able to connect with people in the community and we were able to offer them an experience that was otherwise not available to them.

But their theater takeover actually left the theater. The cinema provided GRRTL with a table in the lobby of the theater where they were able to display and hand out pro-life materials and discount coupons for the concession stand. They were also able to speak with supporters.

But before the screening, something else happened. Alexandria said they were “ecstatic” to find out they had a fully sold out the theater, but that presented a new problem:

People were still clamoring for tickets, though, so I tentatively called the theater and asked if there was any way we could accommodate more people.  Although we had specifically told people that they could only get tickets through our organization, unbeknownst to us, people were calling the theater asking for tickets! The manager, therefore, had already made the decision to give us a second theater.  We were stunned, thrilled, and appreciative. 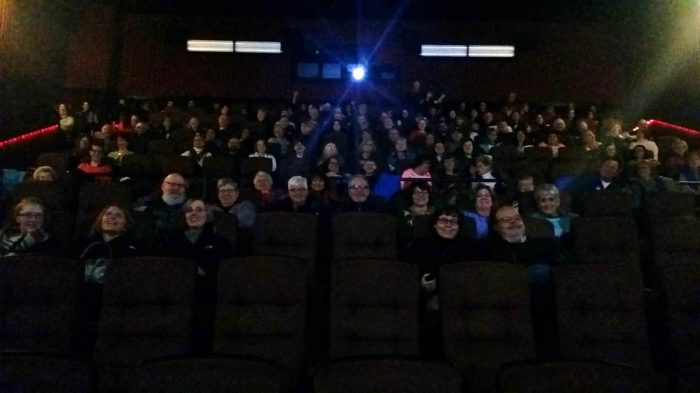 It’s one thing to be able to buy a showing by paying for the whole theater, but quite another when a theater manager decides to bump a secular film off the big screen to let a pro-life Christian film take its place. But Alison’s Choice has been surprising Marchiano since the beginning.

His labor of love has touched people all over the nation. Marchiano continues to receive testimonies of lives saved through his film that even Christian distributors didn’t want to touch due to its overt Christian message. It’s a testimony to the power of God to bless the film anyway.

Alexandria certainly saw that power at the end of the film’s Grand Rapids showing.

“The most surprising moment came after the film ended,” she said. “Our supporters would not leave the theater!  They gathered around our table in the lobby, talked with friends, shared stories, discussed the film, and strategized how to get more people to see the movie.”

One of the groups in attendance that night was from St. Nicholas Orthodox Church. Fr. Michael Nasser, who was at the screening with many of his congregation, said:

What a great night for our church! I’m so thankful to be introduced to Grand Rapids Right to Life who brought the community together for this event. Many of our parishioners filled the one theater–and others were in the overflow theater! All were very moved by Alison’s Choice. This is a film EVERYONE needs to see, especially our young people who are so vulnerable to the lies they are told about the true, destructive nature of abortion. Thank you, GRRTL, for this special ‘life’ event!

Back in California, Marchiano watched with amazement as this small film made a big impact. He credits Alexandria for much of the Michigan screen success. He said one of his goals for the film is to hold a screening in every state, hoping that pro-life groups from around the country will join in hold screenings.

Once people get to the film they find out that it’s not a heavy handed sermon against abortion, but it’s a beautiful story of love and life. Marchiano noted that it’s not unusual to hear, not only of touched hearts, but of joyful laughter in response to the film.