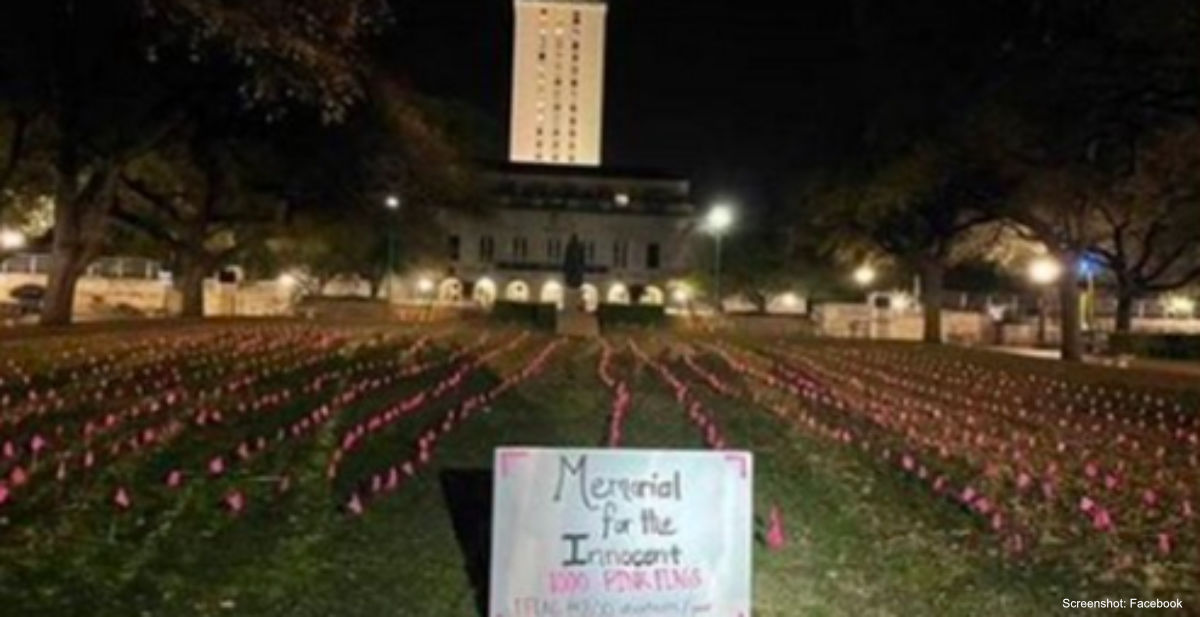 Student group Young Conservatives of Texas recently placed a pro-life memorial on the campus of the University of Texas at Austin, only to find it removed and vandalized less than 12 hours later. The group’s display, “Memorial for the Innocent,” consisted of 1,000 pink flags placed on a campus lawn. Each flag represented 800 preborn babies lost to abortion, to signify the 800,000 children killed in the womb each year in the United States.

According to Texas Scorecard, students didn’t set up the memorial until 11 p.m. in hopes that the late hour would deter anyone from interfering with the display. However, they awoke the next morning to find that all their hard work had completely vanished.

The group’s co-Vice Chairman Samual Samson spoke to Texas Scorecard about his disappointment in finding the memorial gone. “Students seeing the memorial was of the utmost importance, at the very least as evidence that a pro-life movement existed on campus that was willing to stand up to the secular narratives of modern academia and culture. Since few saw the memorial in daylight, dialogue was prevented even before it could materialize, confirming the political left’s modus operandi: Freedom for me, not for thee,” he said.

Initially, there was some ambiguity as to how the memorial display happened to disappear. University administration even speculated that landscapers may have moved it. Unfortunately, the student news organization The Texas Horn later found a tweet from a student who admitted to defacing the display. The memorial was eventually found dumped in a heap on another lawn. Alongside the discarded flags was the group’s sign covered in obscenities and phrases like, “My body, my choice,” and “#BLM.”

This isn’t the first time that Young Conservatives of Texas have faced opposition to its pro-life displays. Pro-abortion students played capture the flag to remove and vandalize a display at the University of North Texas last October.

“It is a sad day for the state of higher education when liberal students feel they are free to vandalize the peaceful demonstrations of conservative students. This behavior is abhorrent and should be unthinkable,” Ariana Silva, the vice chairwoman of the UT YCT chapter, told The Texas Horn.

Young Conservatives of Texas statewide Executive Director Manfred Wendt spoke of the need for colleges and universities to protect the First Amendment right of free speech. “Time and time again, peaceful displays on college campuses in support of conservative policies are destroyed,” she said. “College administrators need to assert institutional control and protect free speech for all members of the collegiate community.”