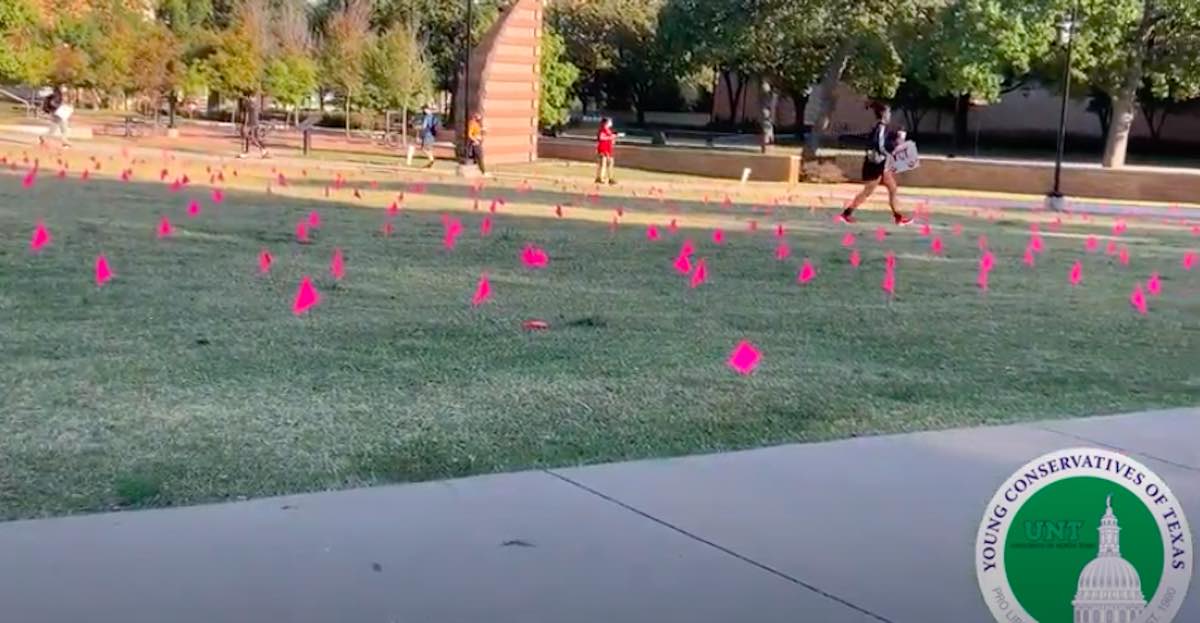 Pro-abortion students at the University of North Texas made a game out of vandalizing an abortion memorial put together by the Young Conservatives of Texas on Wednesday. The pro-abortion students created four teams to play Capture the Flag — stealing the pro-life student group’s flags placed to raise awareness about the number of lives lost to abortion.

“I was shocked to see my peers so openly desecrating our abortion memorial,” Kelly Neidert, the president of Young Conservatives of Texas at UNT, told The Spectator. “The memorial was intended to give a visual representation of lives lost from abortion in a meaningful way. The [pro-abortion] students had planned this beforehand and had ‘capture the flag’ teams ready to take the flags down. We called campus police but by the time they showed up, everything had been taken or damaged. Overall it was a horrible thing to see.”

The Young Conservatives of Texas had received permission from the university to put up 1,000 small pink flags to represent the lives lost to abortion. The display was also to include signs such as “abortion is murder” and “overturn Roe v. Wade.” As soon as the display was announced, pro-abortion students began to plan how they would vandalize it. On the day of the pro-life event, pro-abortion students started stealing the signs and flags, with the theft captured on video. The pro-life campus group also received hate on social media.

Watch this video of a liberal vandal scream profanities as he’s confronted about stealing 180 flags from an abortion memorial. pic.twitter.com/zRsm2iI3zg

“[T]onight. midnight. capture the flags planted by the sexist, transphobic, all around horrid yct group. wear your masks,” said a student named Colby / blm in a tweet. The student has since changed the social media handle to “Organized Vandal” and then again to @surfcursedbolby.

tonight. midnight. capture the flags planted by the sexist, transphobic, all around horrid yct group. wear your masks. pic.twitter.com/c8hXP2vtKj

A personal message sent to one of the Young Conservatives of Texas members said, “Awww is someone sad they don’t get spew their hateful rhetoric wherever they please? What’s the matter snowflake? absolutely pathetic and appalling. You disgust me.” 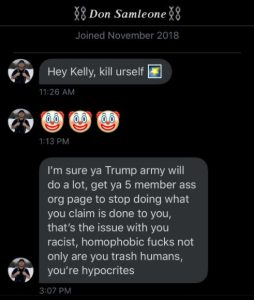 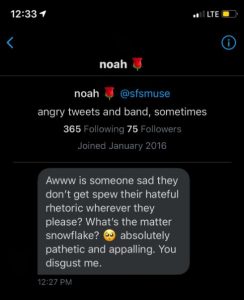 Another told Neidert to “kill urself” and called her “racist,” “homophobic,” and called the group “trash humans.” Despite this, the pro-abortion students claimed the pro-lifers were bullies.

i was literally there, they told y’all to pick them up, and wow, calling someone a degenerate? makes your entire group seem bullyish idk, not the most friendly crowd huh https://t.co/Jdb37aYGg7

The abortion industry was built on racism and groups including Planned Parenthood and NOW recently faced controversy for racism within its organization as well. More Black babies die by abortion in New York City than are born. The National Black Pro-Life Union and Black Americans for Life are just two of the groups established to help Black Americans choose life.