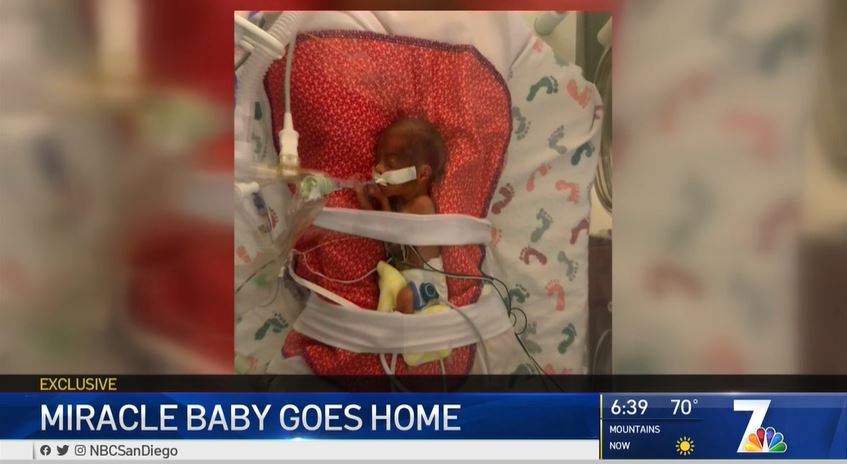 Born four months premature at just 22 weeks gestation and weighing just 15 ounces, baby Giselle has finally been released from the hospital five months after her birth.

Giselle’s mother Courtney Flores was diagnosed with hemolysis, elevated liver enzymes, and HELLP syndrome (a severe form of preeclampsia), meaning Giselle had to be born early on November 17, 2019. She spent the first few months of her life with machines helping her breathe and maintain her body temperature, according to NBC San Diego. She underwent surgeries, and though she still requires supplemental oxygen and a heart monitor, she is well enough to go home.

Who could use a story about a miracle right about now? – a miracle baby to be exact.Little Giselle Flores was born…

“It felt unreal until I got in the car and sat down and saw her back there,” Flores told NBC San Diego. “And then it hit me ‘oh gosh, she’s coming home.”

Flores, her husband, and Flores’ mother Angela Shirley are all caring for Giselle, who now weighs nearly seven pounds. Shirley had been unable to visit Giselle over the last few months due to the COVID-19 pandemic, and said it was an emotional day when she finally came home.

“All of the things she struggled with and this long journey, and she overcame all of it,” she said. “It’s just a miracle.”

Doctors told the new parents to keep Giselle protected and away from other people for at least the first year of her life. The COVID-19 pandemic has now made the couple even more cautious; however, they said they are happy to buckle down at home together.

“At first we were really nervous to bring her home because of what’s going on, but figured we won’t leave the house, we’ll have people meet us outside if we have to,” said Flores. “We have Lysol sanitizing stations, no one is coming in the house. We’re a little bubble over here.”

Though abortion is legal for any reason in the United States at 22 weeks gestation and beyond, babies born at 22 weeks have a chance of surviving if active medical care is provided. Multiple families have shared stories of doctors refusing to help their babies born at 22 weeks, but Giselle — and other children born as young as 21 weeks — prove that there is always hope.