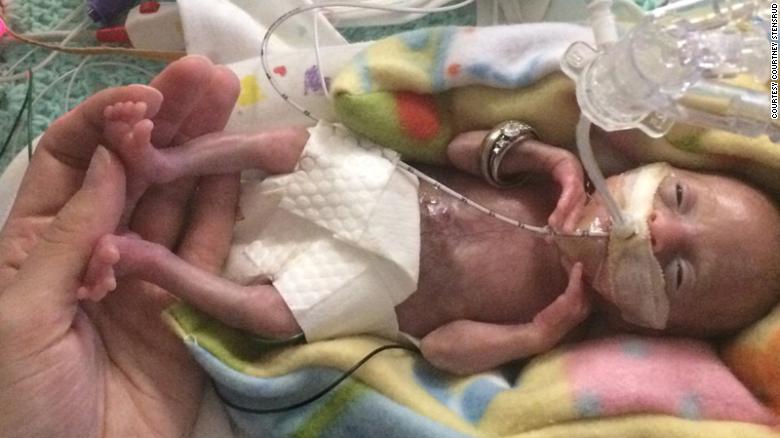 In some places, babies born before 22 weeks gestation are unaided by medical personnel who believe these children have no chance of survival. Doctors will often refuse to resuscitate a child born so prematurely. Therefore, when Courtney Stensrud went into preterm labor after a medical emergency at just 21 weeks and four days gestation, there was little hope her baby girl would survive… except she did.

Now three years old, Stensrud’s daughter may be the youngest person to survive after being born so soon, and because of it, she has been featured in the journal Pediatrics. Amillia Taylor was born and survived at just 21 weeks, six days. Frieda Mangold is Europe’s youngest premature survivor. She was born at 21 weeks, five days. Stensrud told CNN that before giving birth, while she was in the hospital dealing with the premature rupture of membranes and an infection, she had researched online for any children who had survived after being born at 21 weeks. She couldn’t find a single one.

“There were stories of 22-weekers, 23-weekers, but nothing about 21-weekers,” she said. “So I knew that there was little to no survival or viability at 21 weeks.”

Dr. Kaashif Ahmad, a neonatologist at the hospital, told Stensrud that her baby would more than likely die and that he advised against resuscitation. She was told to simply hold her baby until the little girl stopped breathing. Stensrud, however, refused to believe that there wasn’t a chance for her tiny 15-ounce newborn.

“Although I was listening to him, I just felt something inside of me say, ‘Just have hope and have faith.’ It didn’t matter to me that she was 21 weeks and four days. I didn’t care,” she explained. “As he was talking to me, I just said, ‘Will you try?’ And he said he would, and three years later, we have our little miracle baby.”

Thanks to Dr. Ahmad, Stensrud’s daughter was given a chance at life when many other doctors would have written her off. And she proved it was worth it.

“[…] When the mother asked that we do everything for her daughter, despite having no reason to believe the baby would survive, I just made the decision to proceed with a vigorous resuscitation,” Ahmad told CNN. “So we placed her under an overhead warmer, we listened, and we heard her heart rate, which we were not necessarily expecting. We immediately placed a breathing tube in her airway. We started giving her oxygen, and really pretty quickly, her heart rate began to rise. She very slowly changed colors from blue to pink, and she actually began to move and began to start breathing within a few minutes.”

After 126 days in the neonatal intensive care unit, Stensrud’s daughter was released to go home with her family. At age two, the little girl was testing on par with other children her age for cognitive, motor, and language skills. She does not have any hearing or vision problems as is often expected among children born prematurely. She attends preschool and loves dolls, books, and playing make-believe.

Dr. Ahmad told CNN that cases like Stensrud’s are rare and most babies born at 21 weeks will not survive. He said that more research needs to be done and no one should expect that a baby born so young can survive.

Stensrud’s daughter shows, however, that not only are preborn children very much alive inside the womb, but that at 21 weeks there is a chance they could survive outside the womb. The US House voted in October to ban abortions after 20 weeks and the Senate introduced the bill a few days later. In fact, most Americans want most abortions banned after the 20-week mark.

Stensrud hopes her daughter’s life will inspire others and help parents in similar situations to hold on to hope. Technology and medicine are always advancing; problems that would cause the death of premature children even a decade ago are able to be overcome with help today.

“From the moment she entered this world, she’s just always wanted to live,” said Stensrud. “Now, she lives life.”