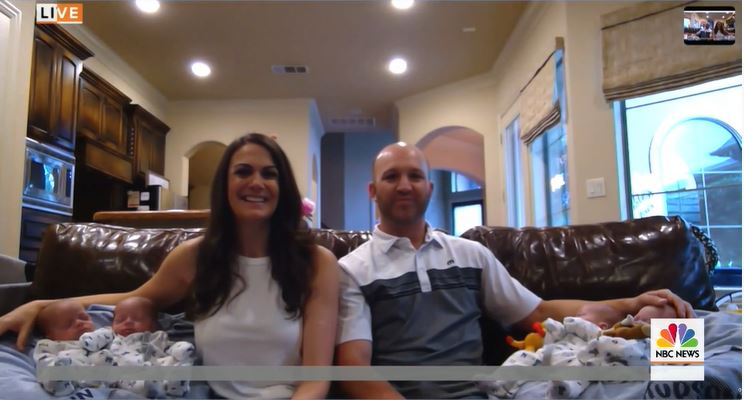 Jenny and Chris Marr were shocked to learn last year that they were expecting identical quadruplets – a one in 11 to 15 million chance. There are only 72 such births known to have ever been reported in the world, and though today they are thrilled with their bundles of joy, when they first learned they were having four babies at once, they were more scared than anything.

“It sounds horrible to say, but I don’t know if it was necessarily tears of joy,” Chris told the Washington Post. “We were completely overwhelmed and, frankly, terrified.”

Initially, the couple was told they were expecting triplets, but after getting used to the idea, they learned from their maternal fetal medicine department that there was actually a fourth baby. Neither Jenny nor Chris had any siblings, and had no knowledge of multiples on either side of the family, so they were floored.

“The tech – who was doing the initial (scan) – she gave me a funny look,” Chris told TODAY. “We were like, ‘Oh what’s going on now?’ We got worried again. She was really cute. She said, ‘I’m not supposed to say this, but y’all got four babies.'”

The news was further complicated by the fact that all four babies were sharing one placenta, which can make it difficult for all the babies to grow properly and at the same rate. If one baby was stronger, he could take all the nutrients and leave the others weaker. But doctors reassured the couple that if that did indeed happen, they could attempt surgery to help all the babies thrive. Thankfully, the issue never arose.

“The babies shared incredibly well,” said Dr. Lauren Murray, the couple’s OB-GYN at Texas Health Presbyterian Hospital Dallas, who called the babies a “miracle.” She added, “There were no incidents on the sonogram even leading up to where we were worried that one of them, or two or three of them, would be significantly smaller.”

Labor began early, as is often the case with multiples, at 28.5 weeks gestation at the start of the COVID-19 pandemic.

“For my first time (during my pregnancy) I anticipated the worst,” said Jenny. “Maybe we were going to have sick babies and they were going to be in the NICU.”

Born at 28 weeks and 4 days the Marr quads arrived on March 15th. It was 5 weeks earlier me than we had expected, and i…

“It’s incredible,” said Jenny. “We called them our baby birds because they really looked like baby birds.”

All of the boys spent about 10 weeks in the neonatal intensive care unit, according to TODAY, with three of them needing oxygen support. They were discharged in May, and their parents have special ways of telling them apart.

“They each have little bitty characteristics,” explained Chris. “When we sit down and look at them we can figure out who they are but if you just look at them from a distance, they all look the same.”

But if that method fails, the babies each wear an ankle bracelet so they never get mixed up. The family of six is settling into their new life at home amid social distancing and quarantine. They hope their story can bring joy to people during this uncertain time.

“It was kind of hard to wrap our head around but we’re doing good with it,” said Jenny. “It’s fun, it’s exciting. To be able to share these little miracles… it’s just been really special.”