For decades, the chant of the pro-choice abortion advocates was “safe, legal, and rare” — but it turns out that keeping abortion “rare” (or safe for that matter) isn’t really what abortion advocates care about. This should come as no surprise since abortion is an industry and any industry that works to keep its sales “rare” is going to go out of business. That’s why when the #AbortionIsLove hashtag began trending on Twitter, many of those participating were actually abortionists. Now, post-abortive women are speaking out about the hashtag.

Tori Shaw had an abortion when she was just 16 years old. At the time, she thought that having an abortion was the choice she had to make. “Abortion seemed like a way of protecting my future and showing love to myself,” she told Live Action News. “Little did I know, I was doing the opposite. The choice to abort my child resulted in a future full of shame and regret. Since that day, I have struggled to love myself at all. The truth is, abortion is selfish and doesn’t empower anyone.”

READ: Pro-choicers claim ‘no one likes abortion’ while #AbortionIsLove trends on Twitter

Shaw was taken for the abortion the day after learning she was pregnant. She is now married to the father of that baby, and they have had four more children. She wrote a response to the #AbortionIsLove hashtag, which she shared with Live Action News:

Choosing NOT TO ABORT is love.

Love is selfless, kind, and gentle.
Love is believing someone else’s dreams are just as important as yours.
Love is saving your future self heartache and shame.
Love is choosing to bless a child-less family with they baby they’ve been praying for.
Love is protecting the innocent and fighting for the weak.
Love is realizing that all humans are equal and deserve a chance.
Love is choosing not to force a child to pay for his father’s sins.
Love is seeing beauty in the life of others.
Love is giving someone a chance, even when the doctor says they have none.
Love is caring about another person’s happiness and future, more than your own.
Love is laying your life down for someone else.

I wish I had known that 20 years ago.

Christine Loughead was also just 16 when she had her first abortion. It wasn’t, however, by choice. Loughead was forced to abort by her social worker twice, and then became filled with self-doubt, believing that she must not be fit to be a mother. That emotional scarring caused her to have three more abortions. She regrets every one of them. In response to #AbortionIsLove, she wrote to Live Action News:

Love is putting someone else first.
Love is nurturing and protecting.
Love is not ripping off your baby’s legs and arms in the space made to shield them under your care.
Abortion is not love. It’s violence.

Loughead told Live Action News that she finds it “appalling that doctors would support killing babies and dismembering them and crushing their skulls because they’re viewed as inferior to someone else who’s already been born. This is eugenics practiced on poor women, women of colour, young women, and others without a lot of support or resources.”

Serena Dyksen is another post-abortive woman who spoke out against #AbortionIsLove. She had an abortion at 13 which was committed by infamous abortionist Ulrich “George” Klopfer, known for hoarding the bodies of his victims. She tweeted a response to the hashtag, saying in part, “[Abortion] is not #love #abortionhurtswomen #lovethemboth.” 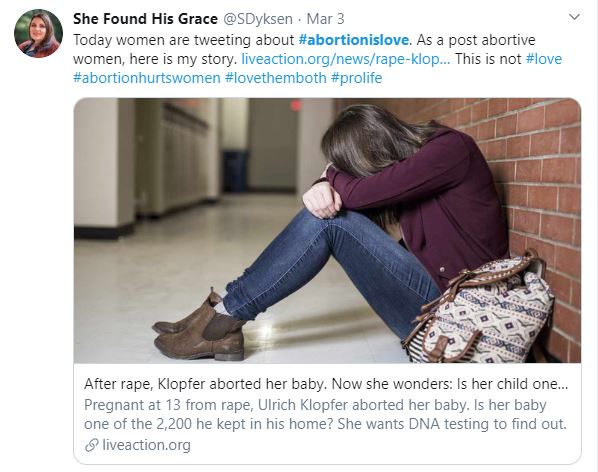 Erika Kapustinski had two abortions during a tumultuous time in her life. Each of them left her devastated, and she recently visited Planned Parenthood to obtain her ultrasounds so she could have a picture of her babies. She told Live Action News, “Abortion is NOT love. It is not healthcare. It is not freedom. It is not safe. It is not self-love. No matter how many women post on social media that it is, it is not. I may be just one voice, but I have known the pain of abortion and I have seen what abortion did to my babies. I have experienced the depression, shame, suicidal thoughts, and more that follows many women after having had an abortion. Being a #postabortivemom had me convinced that I was not worthy of being a mom to my four living children because of what I had done.”

“I am a post-abortive mom and I will always speak on behalf of my two babies whose lives were lost to abortion, David and Bella,” said Kapustinski. “They mattered.”

Abortion is the purposeful and violent destruction of innocent human beings because they have been deemed inconvenient, unworthy, or disabled. Violence is not an act of love, even in the womb, which should be the most peaceful place on earth.