The latest poll by the University of Texas/Texas Tribune shows that almost half of all Texas voters, and over two-thirds of those who identify as Republican, would support an early abortion ban that resembles those recently passed in Mississippi, Ohio, and Georgia.

The Texas Tribune reports that about half (48%) of Texas voters “support making abortion illegal after six weeks of pregnancy,” as a half-dozen states have done with similar bans, often known as “heartbeat bills,” which outlaw it as soon as a baby’s heartbeat is detected; 42% said they oppose such a law.

Notably, 46% of Texas women supported outlawing abortion after six weeks, while 45% did not. Meanwhile, the results also showed that 31% of voters in Texas believed it should be allowed “only in case of rape, incest or when the woman’s life is in danger,” while another 13% said abortion should be legal in certain cases “only after the need for the abortion has been clearly established.” 15% believe it should never be allowed. However, 37% agreed with the statement, “a woman should always be able to obtain an abortion as a matter of personal choice.”

This means that 59% of those polled believe that abortion should be illegal or heavily restricted. 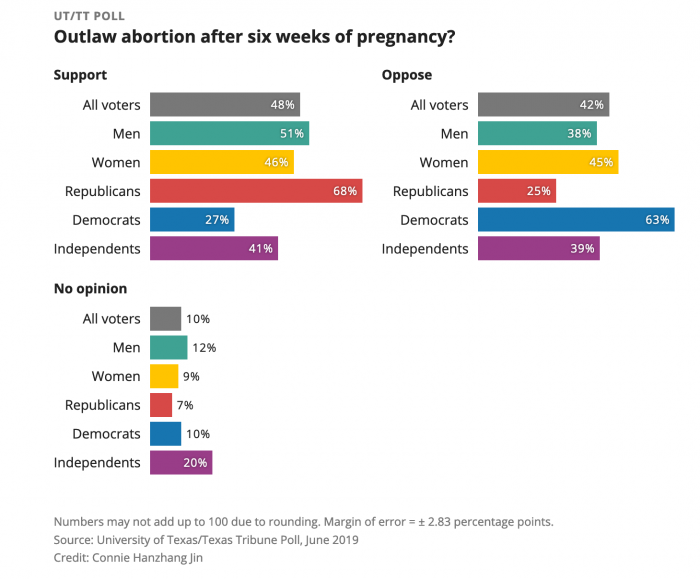 Daron Shaw, who is a professor of government at the University of Texas at Austin and also a co-director of the poll, said:

Most people are kind of in the middle. They don’t think you should be able to get an abortion on a whim. But they support it for strong circumstantial reasons. When you add in a secondary dimension — at what point are we talking about? — then it becomes very interesting. Although this is an issue where there are religious and ideological underpinnings, they are complicated by circumstances and by what point you are in a pregnancy. Timing seems to matter, and it’s where medicine is really complicated.

The fact that even more than half of those who call themselves pro-life would allow abortion under three different circumstances reveals that some people do, indeed, find the issue of life more complicated than it is. However, if one understands that life begins at fertilization, as science clearly proves, then it really remains as simple as that.

Results of the methodology and summary of poll can be accessed here.