Factual information about fetal development and the heartbeat of a preborn child can affect how Americans react to and vote on abortion, according to a new Rasmussen poll. “When told that a fetal heartbeat can be detected as early as six weeks into a pregnancy, 56% of voters favor a proposal that would make abortion illegal at any point after such a heartbeat has been detected,” says pollster Scott Rasmussen. “However, there is a bit less support when the question is asked without the information about how early the heartbeat can begin. In that case, the survey found that just 45% of voters support fetal heartbeat laws.”

In other words, when you give people accurate information on human development in the womb, support for abortion dwindles.

The poll report went on to reveal how vital this information could be to future elections, noting:

But the abortion lobby and their supporters do not want American to know the facts. Recently, after I tweeted a Live Action News article with the heading, “Do preborn children have an actual heartbeat? The answer is yes,” the well-known fact was immediately disputed by a Twitter account holder Amber Fraley, whose page states she is a writer for Medium. Fraley also sits on the board of the Peggy Bowman Second Chance Fund — abortion fund in Kansas. What Fraley said is shockingly unscientific and untrue. “No they don’t,” she tweeted “A fully formed four chamber heart capable of pumping blood around its body doesn’t develop until late in pregnancy.”

But before I had a chance to respond, Fraley deleted her tweet. However, the uninformed response really warrants a response, as this has become a much more frequent false claim from abortion supporters. 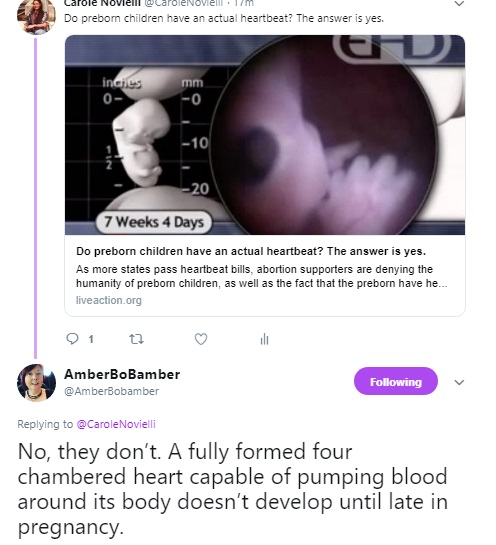 Had Fraley read the article I tweeted, perhaps she would have seen that it contains video proof from the Endowment for Human Development that the preborn child’s heart is beating with the first weeks of pregnancy. (See video below.)

Live Action News reached out to Donna J. Harrison M.D., Executive Director at the American Association of Pro-Life Obstetricians and Gynecologists (AAPLOG). Harrison confirmed that Fraley’s claims about the preborn heart are way off. “The heart is pumping blood through the fetal body by 5 weeks gestation and is fully formed by 10 weeks gestation,” said Harrison.

In addition, Dr. David Prentice Vice President and Research Director at the Charlotte Lozier Institute, who spent 20 years as Professor of Life Sciences at Indiana State University and Adjunct Professor of Medical and Molecular Genetics at the Indiana University School of Medicine, also weighed in. Prentice told Live Action News, “The developing embryo, later called a fetus after 8 weeks, relies on the heart pumping blood throughout its developing body to survive and grow.” He continued:

The human heart has developed 4 chambers by Carnegie stage 22, approximately 8 weeks (56 days) post-fertilization. But it has been beating and circulating blood throughout the body of the developing embryo since about 26 days. It was only a simple tube at that stage, then developed 2 chambers, then split those 2 into 4 chambers which were complete by about 56 days post-fertilization.

Dr. Prentice went on to say that the fetal circulatory system through which the blood is pumped throughout the developing body, is “essentially the same as after birth, but with a couple of short-cuts for oxygenated blood.  At that stage of our lives, the source of oxygen is not our lungs, but the umbilical circulation instead, bringing oxygen from Mom.” He added:

The oxygen is exchanged from Mom’s blood to the developing baby’s at the placenta.  The oxygenated blood then enters our body at a spot called the Ductus Venosus (near the liver), and from there goes to the developing baby’s heart.  Since it’s already oxygenated, there’s a shortcut between the atria (Foramen Ovale) so blood can go from the right to the left side of the heart, and out to the body (rather than from right side of heart to lungs and back.)  Some blood does go into the right ventricle which would normally pump all it’s blood to the lungs, but there’s another shortcut (Ductus Arteriosus) which cuts over to the aorta and sends much of that blood to the body.  In essence, both right and left ventricles are pumping oxygenated blood to the body. 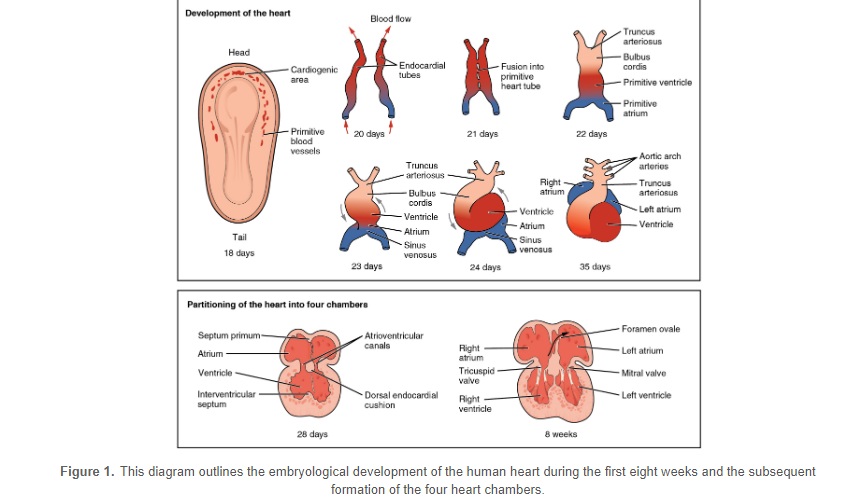 “At birth,” Dr. Prentice added, “The shortcuts are closed off so that oxygen is now obtained from the lungs. The blood will then go from right atrium to right ventricle, to the lungs to get oxygenated, back to left atrium and left ventricle, and out to the body.” Here’s a video which shows this process very well, and this website describes the circulatory system of the preborn child also, showing the shunts and explaining their closure.

Bottom line: abortion proponents who claim that the human embryo doesn’t have a heartbeat or a functioning heart are utterly unscientific and false. Perhaps we should listen to more reliable sources than those who seem to be reaching for any excuse to continue the arbitrary killing of preborn human beings.