As we begin 2020, a look back at the previous decade reveals that since 2010, taxpayer-funded Planned Parenthood (PP) has reported ending the lives of nearly three million (2.9 million) preborn children — and during this same period has received nearly $5 billion from U.S. taxpayers. To date, however, the actual number is much higher because current data only reflects 2010 to 2018, the most current year reported by Planned Parenthood. 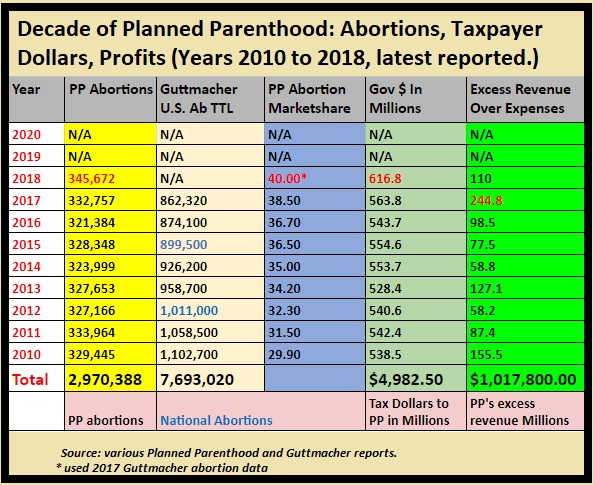 This past decade also saw a decline in many of Planned Parenthood’s actual health services:

Planned Parenthood’s assets grew substantially in the past decade — a point made by former Representative Jason Chaffetz in his book Power Grab. He writes that PP’s “endowment funds were valued at almost $88 million in 2013 and had grown to over $157 million in their 2016 financial report…. Keep in mind that the Federation does not supply direct services to the public….”

Over the course of the past decade (2010 to 2018), Planned Parenthood has been embroiled in a number of abuses, leading for calls to completely defund the abortion giant. Live Action and others have exposed these abuses for many years. Here are some examples:

2010: IRS looks at records of California affiliate PP Golden Gate after staffers complain about “the misappropriation and mismanagement of PPGG’s funds”

As the battle to expose Planned Parenthood continues, the pro-life community is just as committed to exposing the abortion corporation in 2020 as it was in the past decade.