Planned Parenthood president Leana Wen, who admitted abortion is at the “core” of what the corporation does, is traveling the country citing a long-debunked claim about how many women died from abortions before it was legal in America. And unsurprisingly, no one in the abortion-friendly media is doing their journalistic job of fact-checking her. Planned Parenthood’s own staffers debunk her claims, as does the Guttmacher Institute, the Centers for Disease Control, among others — yet the media says nothing. It is instead helping her to lie to the public. It’s nothing short of fear mongering.

FALSE CLAIM: Thousands of women died every year from illegal abortion prior to Roe.

Women died from both illegal and legal abortions prior to Roe, and they continue to die from legal abortion today. But it was the introduction of antibiotics in the 1940s which dramatically decreased abortion-related deaths to roughly hundreds or less a year. As a physician, Wen should know this. Instead, she chooses to completely mislead the public.

NARAL founder and former abortionist Bernard Nathanson admitted he and others fabricated large numbers of deaths from illegal abortions prior to Roe. In his 1979 book, Aborting America, Nathanson called the “thousands” claim a “nice, round, shocking figure.”

Planned Parenthood’s own fact sheets show that deaths were hundreds or less, stating that in 1965, “when abortion was still illegal nationwide except in cases of life endangerment, at least 193 women died from illegal abortions…” 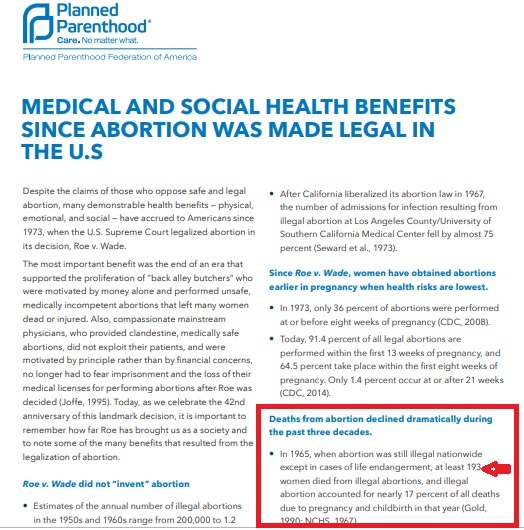 Planned Parenthood’s own past medical director Mary Calderone claimed that in 1957, “there were only 260 deaths in the whole country attributed to abortions of any kind.” NOT thousands per year. 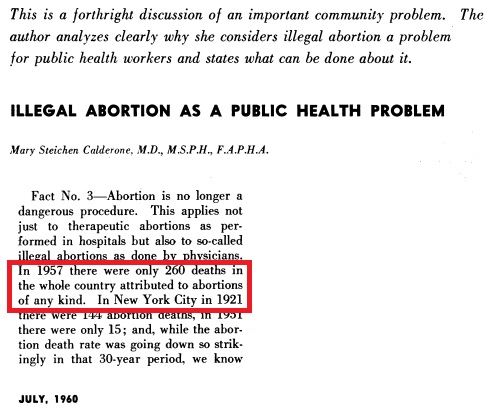 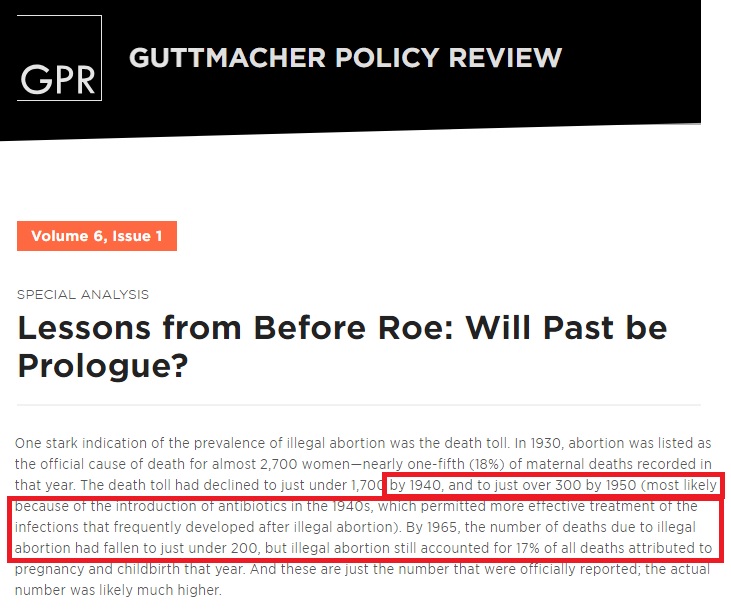 And to top it off, the abortion industry admits that it was physicians who were committing most illegal abortions prior to Roe. Former Planned Parenthood president Alan Guttmacher stated at a 1967 Harvard Law School Forum, “Seventy per cent of the illegal abortions in the country are performed by reputable physicians, each thinking himself a knight in white armor.” 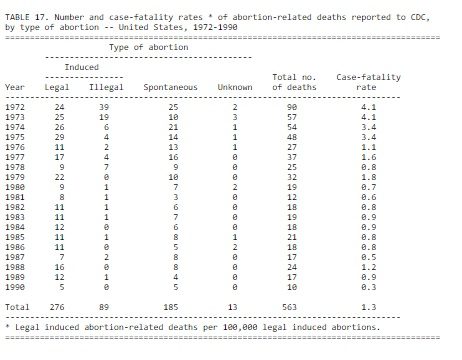 But Wen hasn’t just lied once or twice. She’s repeated this false claim at least five different times. This is a calculated propaganda tactic — repeating a lie often enough so that people will believe it.

Lie #1: March 5, 2019 – Wen told the Dallas Observer that, “It’s deeply disturbing when people spout lies…” which she then went on to do herself, using the infamous false claim:

” I have a mentor who told me about what it was like to work in the 1960s, pre-Roe…. Thousands of women died because they didn’t have access to safe, legal abortion. That’s what could happen now, 46 years after Roe v. Wade.“

Lie #2: March 6, 2019 – In an interview with Texas ABC affiliate WFAA in Dallas, Wen cited the false statistic again. “I am deeply concerned about the future of Roe v. Wade,” Wen told WFAA. “We face a real situation where Roe could be overturned. And, we know what will happen which is that, women will die. Thousands of women died every year prior pre-Roe.”

Live Action News debunked this claim at the time, but to date, WFAA and reporter Jason Whitely have failed to issue any corrections.

Lie #3: March 8, 2019 – In a Harper’s Bazaar podcast interview with Dare I Say, Wen proclaimed, “If Roe were overturned, if it’s further eroded… I never thought that we could go back to a time like that where thousands of women died and yet its 2019 and that seems real.”

The statement was used as the title of the interview page. 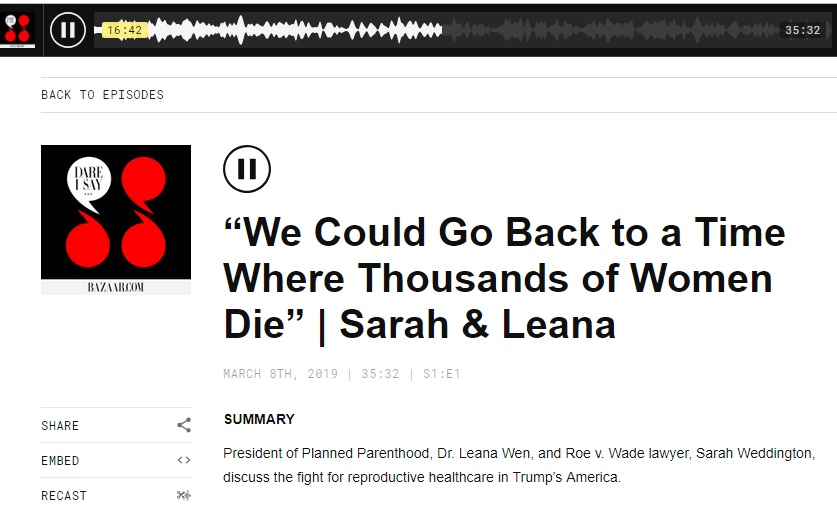 Lie #4: March 21, 2019 – In an interview on the Daily Show, the Planned Parenthood president told host Noah Trevor the same story, claiming  “sepsis wards” “could happen now.” (What’s interesting is she doesn’t mention that sepsis is a risk of legal abortion — and does, indeed, happen to women today.)

Wen also again claimed, “Thousands of women died before Roe versus Wade and that could happen now. And, this is what we need to call out.” Unsurprisingly, pro-abortion host Trevor Noah failed to correct or question Wen.

You can hear a clip of the statement in Live Action’s fact check of additional misleading statements from Wen in that interview in the video below:

Lie #5: April 2, 2019 – Wen traveled to the Rhode Island State House to advocate passage of the Reproductive Health Care Act (RHCA) to support dangerous legislation that removes “nearly all existing protections for unborn life,” as National Review described it. While there, Wen claimed that women died in hospital “sepsis wards” in pre-Roe days “because they lacked the access to safe/legal abortion…. “[W]e cannot roll back the gains that we’ve made and go back to a time when thousands of women died every year right here in the U.S.” 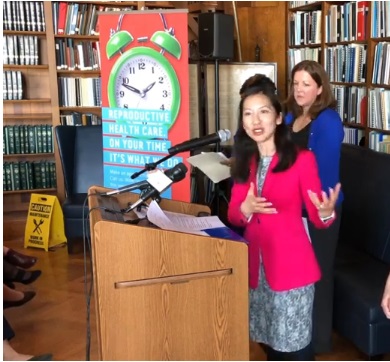 In addition to failing to fact check Wen’s false claims, the media also fails to ask Wen about the women who die from legal abortion — even at Planned Parenthood. Many of their names can be seen at the end of the video below.

Planned Parenthood receives half a billion in taxpayer dollars annually, allowing them to pocket millions in profits and wield their power to influence both media and politicians. Is it any wonder that neither will call Planned Parenthood out on its lies?