Planned Parenthood has been cited for overbilling abuses and Medicaid fraud, for violating patient privacy, and for failing to report child sexual abuse. So why is the abortion corporation still receiving half a billion dollars a year from taxpayers?

A study by the Government Accountability Office (GAO) and Congressional Budget Office (CBO) in 2012 showed that Planned Parenthood received $400.56 million in Medicaid reimbursements (including both federal and state dollars), according to findings published in 2017 by the Congressional Research Service. Planned Parenthood’s own 2015-2016 annual report shows that 41 percent of its funding comes from the taxpayer ($554.6 million). Numbers published in previous Planned Parenthood annual reports indicate its affiliates have received more than $4.5 billion from taxpayers. 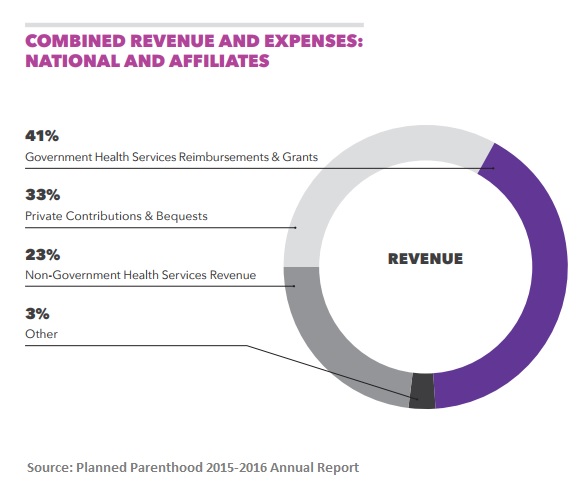 Yet, with so much tax money at stake, exactly what kind of oversight is being conducted to safeguard more than half a billion tax dollars entrusted to Planned Parenthood annually?

According to reports by watchdog agencies, very little.

In 2014, the group Alliance Defending Freedom (ADF) published a report identifying 10 types of waste, abuse, and potential fraud Planned Parenthood affiliates have been caught committing or have been credibly accused of nationwide. The potential fraud includes billing while obtaining reimbursements from Title XIX agencies for medications and/or services provided in connection with an abortion. This is illegal.

ADF’s research found that taxpayers were losing millions of dollars in the forced funding of Planned Parenthood, which now garners 35 percent of the abortion market; it is the nation’s largest single abortion provider. Despite several incidents of overbilling and potential fraud, ADF found that only “fourteen affiliates, or approximately twenty-one percent had been audited,” noting that the others “have been accused of financial fraud and worse.” 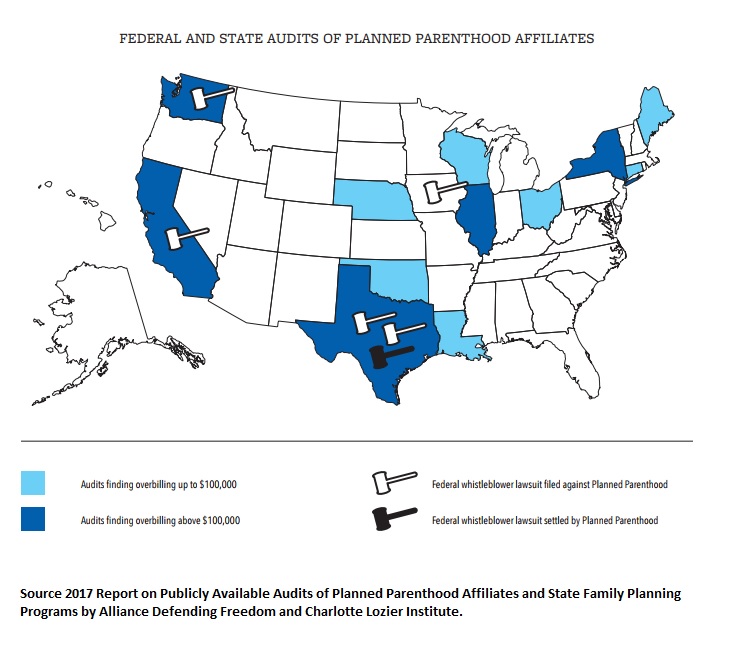 Then, in 2017, a coordinated study conducted by both the Charlotte Lozier Institute (CLI) and Alliance Defending Freedom reviewed a number of additional audits from a variety of agencies. The purpose of the study was to identify waste, abuse, and potential fraud by Planned Parenthood among its now 57 separately incorporated affiliates, and other abortion and family planning facilities, particularly with respect to federal and state Title XIX-Medicaid programs.

A large and growing number of federal and state audits have documented that improper practices by Planned Parenthood and state family planning agencies have already resulted in losses to the American taxpayer of nearly $132.4 million, at a minimum, in Title XIX-Medicaid and other healthcare funding programs.

The groups pointed out that the audits they reviewed were limited in scope, suggesting the possibility for millions of additional taxpayer dollars to be wasted or fraudulently overbilled.

“For example, an audit may examine only one type of billing, for one type of product, for one clinic in a single year. Yet nearly every known audit of Planned Parenthood affiliates and of state family planning programs has found overbilling,” the report notes.

But of the 51 known “recent external audits or other reviews” of Planned Parenthood affiliates’ financial data and practices in 12 states, CLI and ADF uncovered at least $8.5 million in waste, abuse, and potential fraud in the following states:

Interestingly, the audit from Nebraska proved, as Live Action News has stated many times, that federal and state taxpayer dollars are funding abortion. The report found in the Nebraska audit “a Planned Parenthood affiliate spending federal funds on abortion expenses in violation of federal and state law.”

“In New York, alone, during one four-year audit period, it appeared that hundreds of thousands of abortion-related claims were billed unlawfully to Medicaid,” ADF’s Mattox told a Congressional hearing on the topic in 2015.

Live Action News has previously documented how taxpayer dollars are funding abortions, and Nebraska was just one example. When government funds abortion, more abortions happen, not fewer. This should never be taxpayer funded:

The potential fraudulent use of Medicaid dollars by Planned Parenthood also caught the attention of Oklahoma’s then-Governor Mary Fallin, who sent a letter to the head of the Oklahoma Health Care Authority Board, stating, “[…] more than one in every seven bills submitted for payment to your agency by these providers are inaccurately coded or insufficiently documented…. The lack of attention to the requirements imposed on a responsible provider is a continuing problem for these Planned Parenthood affiliates.”

The researchers concluded that despite receiving billions of dollars from taxpayers, only 19 of Planned Parenthood’s 57 U.S. affiliates (33 percent) have been audited, “And others have been accused of financial fraud and worse.”

During testimony in 2015 before Congressional members, Mr. Mattox explained:

[The] Medicaid statute provides grounds for which the U.S. Department of Health and Human Services, in its discretion, may exclude a provider. These include claims for excessive charges, unnecessary services, or services which fail to meet professionally recognized standards of health care; fraud, kickbacks, and other prohibited activities; entities controlled by a sanctioned individual; failure to disclose required information, supply requested information, or supply payment information; sanctioned individuals controlling an entity; and making false statements or misrepresentations of material fact.

He then pointed out:

Mr. Mattox then alluded to the reason: “… [B]etween local affiliates and the national organization, Planned Parenthood has spent many millions of dollars to support the election of its preferred candidates.”

In 2018, despite large sums of taxpayer dollars being previously misused and few Medicaid audits underway to safeguard additional tax dollars, Planned Parenthood is poised to receive yet another half a billion forced taxpayer funding. This, despite repeated promises by GOP Senators, members of Congress, as well as President Trump, to defund Planned Parenthood — which has not yet happened, despite the fact that Planned Parenthood’s legitimate health care services and patient numbers have been declining for years:

The continued misuse and fraud of American tax dollars by Planned Parenthood is unacceptable. When will it stop?