A new report released by Live Action shows that many media outlets have been caught up in Planned Parenthood’s web of lies.

The documented evidence shows that Planned Parenthood repeatedly lied to media outlets after they were exposed in undercover video footage offering assistance to investigators, posing as pimps prostituting minor girls. The information stems from a 2011 investigation where Live Action investigators exposed eight Planned Parenthood clinic staffers at seven different Planned Parenthood facilities willing to aid and abet child sex traffickers by suggesting how to get abortions and birth control for their 14- and 15-year-old victims.

After Live Action released the undercover footage exposing Planned Parenthood, the abortion chain claimed to the media that it would retrain thousands of staff members across the country to properly report suspected sexual abuse of minors to authorities.

Stuart Schear, Vice President for Communications for Planned Parenthood Federation of America, released this statement which read in part:

In addition, Planned Parenthood just announced an April 1, 2011, deadline for all health center staff and educators who have contact with patients and teens be retrained in understanding our policies and procedures for responding to situations that indicate that the welfare of a minor is endangered.

Shear then went on NPR and reiterated their statement on retraining:

We wanted to make sure that it was crystal clear that Planned Parenthood holds nothing more important than the welfare of minors and we are going to ask all of our staff between now and April 1st to go through a retraining on mandatory reporting. 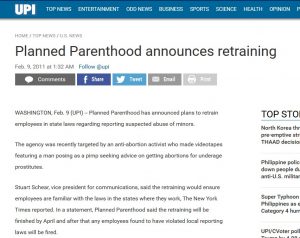 Planned Parenthood has announced plans to retrain employees in state laws regarding reporting suspected abuse of minors…Stuart Schear, vice president for communications, said the retraining would ensure employees are familiar with the laws in the states where they work, The New York Times reported. In a statement, Planned Parenthood said the retraining will be finished by April and after that any employees found to have violated local reporting laws will be fired. 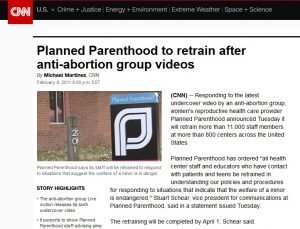 CNN did the same:

Planned Parenthood has ordered “all health center staff and educators who have contact with patients and teens be retrained in understanding our policies and procedures for responding to situations that indicate that the welfare of a minor is endangered,” Stuart Schear, vice president for communications at Planned Parenthood, said in a statement issued Tuesday. The retraining will be completed by April 1, Schear said 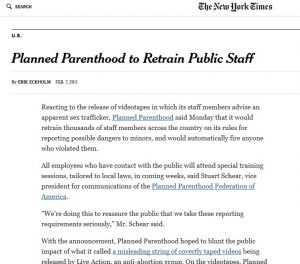 Reacting to the release of videotapes in which its staff members advise an apparent sex trafficker, Planned Parenthood said Monday that it would retrain thousands of staff members across the country on its rules for reporting possible dangers to minors, and would automatically fire anyone who violated them…When the retraining is completed in April, “termination of employment is the only possible action” when staff members do not report potential abuses of minors, the federation said in a statement…They said employees had long been trained to obey local reporting laws as well as to use common sense when confronted with evidence of the abuse of minors. 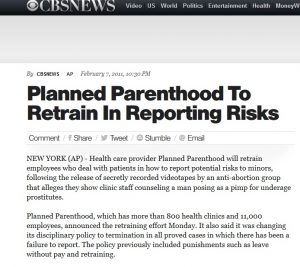 CBS reported the training this way:

Planned Parenthood Federation of America Inc.,…said…the goal of retraining was to show a “firm commitment” to reporting any potential harm to minors. Federation spokesman Stuart Schear emphasized that the training was not new but was meant as a refresher. He said training will follow state laws where affiliates have clinics. “We want to be crystal clear for those millions of people who come to us and trust us that we will never put a minor at risk,” he said..

CBS was also told by the abortion chain that any employee who violated the policy would be terminated.

Fox News, Politico, and many others weighed in as well. They all simply took Planned Parenthood’s word at face value, almost blindly believing that the organization took reporting of child sexual abuse seriously and that they would be retraining to assure stringent policies were followed.

However, according to a Planned Parenthood insider, that so-called “retraining” appears to have been an effort by the abortion corporation to instruct their staff on how to identify undercover operatives — like the Live Action investigative team — not to identify teens suffering under sexual abuse.

Ramona Treviño, who was employed as the Sherman, Texas, Planned Parenthood manager when these so-called retraining sessions were to have occurred, revealed that instead of helping employees identify and report potential abuse, the retraining sessions instructed staff how to identify undercover journalists and whether they were being recorded.

Should the media have known better?

The answer is YES, and for one simple reason: these “retraining” promises had been given as PR stunts to appease the media before.

In 2010, after Live Action released undercover video footage of an actor posing as a minor impregnated by a much older boyfriend to see if it would raise any red flags by Planned Parenthood staff, US News reported this:

“Nonetheless, the clinic immediately retrained all its staff, the spokesperson says. According to a December 2008 statement from Planned Parenthood of Indiana, the Indianapolis clinic…said that “we’ve already made changes to tighten procedures and reinforce our reporting policies with all health center staff across the state…“

Vanessa Cullins, Planned Parenthood’s vice president for medical affairs, told told US News reporter Deborah Kotz in that 2010 interview, “We take seriously any allegations that come our way and take corrective action in the form of training and retraining in order to ensure that care is in accordance with the law.” The article continued:

There’s now a policy in place, she [Cullins] says, to transfer patients to a trained “skills interviewer” whenever a patient hints at abuse—be it statutory rape, domestic violence, or pregnancy coercion.

Sound familiar? It should because, in 2008, an Indiana ABC affiliate claimed they were told by Planned Parenthood, there would be retraining then as well. 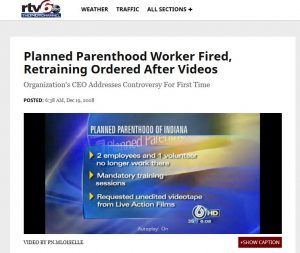 That “claim” was passed onto the Associated Press and picked up by the Huffington Post:

Live Action News has previously documented how Planned Parenthood responds to the victims of sex trafficking. Testimony from a 2014 report quotes trafficked victims who claim they were taken to Planned Parenthood for care because “they didn’t ask any questions.”

Sadly, even though the reporting of suspected child abuse by Planned Parenthood is expected under Title X, which funnels millions of tax dollars to Planned Parenthood and other family planning organizations, the media continues to publish Planned Parenthood’s spin without question. Journalism is supposed to question and verify sources or statements while remaining neutral and without bias.

Sadly, as you will see in part two, when it comes to Planned Parenthood, today’s media is all too quick to throw journalistic standards away.