The former Planned Parenthood staffers’ letter noted, “we are of one mind that the extent of theses problems with the organization is not fully understood by the American people….” They added that they “could personally attest” that Planned Parenthood has “operated as a law unto itself, gladly accepting tens of millions of dollars of taxpayer support while using the rubric of ‘reproductive rights’ to claim exemption from the normal standards of accountability that every other recipient of public funds is expected to meet.”

In August 2013, the whistleblower case of Karen Reynolds, a former employee of Planned Parenthood Gulf Coast, resulted in the Houston-based Planned Parenthood affiliate paying $4.3 million to resolve civil allegations made by Reynolds under the False Claims Act in the Eastern District of Texas. According to a Department of Justice release:

The government alleged that between 2003 and 2009, Planned Parenthood Gulf Coast billed and was paid by government programs, Texas Medicaid, Title XX, and the Women’s Health Program, for certain items and services related to birth control counseling, STD testing and contraceptives when such items and services were either not medically necessary, not medically indicated or not actually provided.

According to a 2017 report called “Profit No Matter What,” published by Alliance Defending Freedom (ADF) and the Charlotte Lozier Institute (CLI), Planned Parenthood’s facilities were required “to constantly increase their ‘pay per visit’ goals which were the bills charged to Medicaid for every patient visit.”

Patricia Carroll was employed as the Accounts Receivable Manager by Planned Parenthood Gulf Coast and stated in her claim against Planned Parenthood that she noticed “a large revenue increase” of 314.76% for PP in Huntsville “while preparing the monthly Projection report.” The Dallas Morning News said about Carroll’s Medicaid fraud accusation:

Carroll worked as the accounts receivable manager at Planned Parenthood Gulf Coast from 2007-2012. In that position, she said she discovered “a fraudulent Medicaid scheme” that dated back to 2002. She alleged that a Planned Parenthood clinic in Huntsville had an employee visit a charter school called Gulf Coast Trade Center and perform STD/HIV tests on the students there, all of whom receive Medicaid benefits.

Carroll said Planned Parenthood incorrectly coded the visits to collect Medicaid reimbursements, estimating the clinic received about $200 per student. “Thousands of claims were filed” in the ten year span, according to Carroll’s original complaint.

In May 2014, a federal district judge in Houston ruled that Carroll had “adequately pleaded factual content that allows the court to draw the reasonable inference that Planned Parenthood knowingly filed false claims.”

The ADF/CLI report added that “at least some of the services were not medically necessary due to the duplication of visits, teens already having been tested at the jails or court systems they came from, and the higher-level staff already onsite at the school who could provide the same testing and education at no cost.”

Carroll’s lawsuit was dismissed on January 29, 2016, for an undisclosed settlement amount, the ADF/CLI report states. 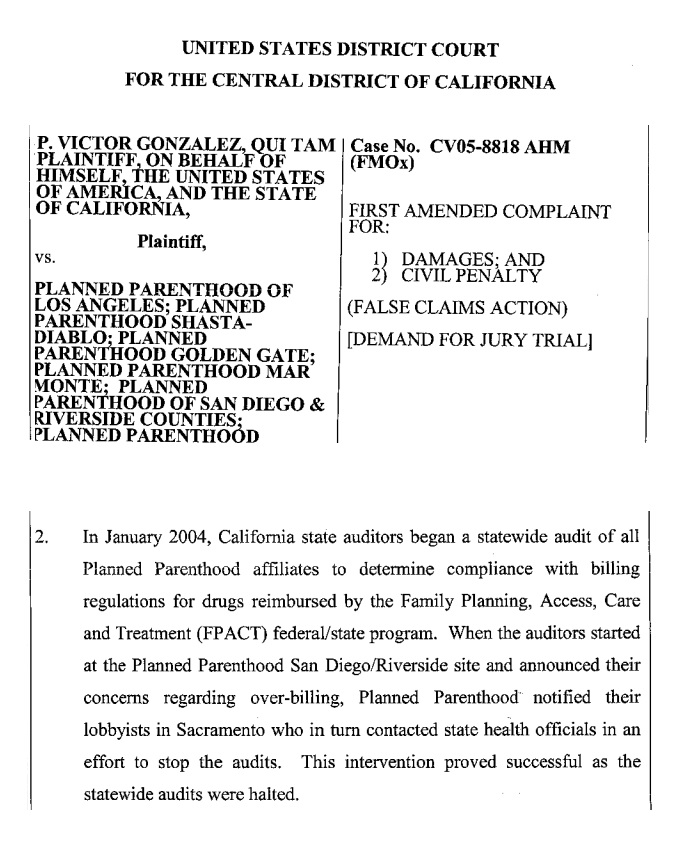 P. Victor Gonzalez was employed as Vice President of Finance and Administration by Planned Parenthood of Los Angeles (PPLA). Gonzalez accused Planned Parenthood affiliates in California of marking up the cost of birth control drugs between 1997 and 2004 for government reimbursement, resulting in improper reimbursements — at taxpayer expense — far in excess of $200 million.

“An internal email from Gonzalez states that PPLA’s actual acquisition cost for oral contraceptive pills was $1-2, but that it was charging the government $12-48 per pack – a ‘hefty markup’ ‘proscribed by DHS regulations.’ Gonzalez estimates the impact on PPLA alone as approximately $4 million in revenues in a single typical year,” the ADF/CLI report states.

In 2015, Thayer testified before a Congressional committee about the claim, accusing Planned Parenthood of filing “[…] false claims totaling about $28 million with Iowa’s Medicaid program for (1) illegally dispensing “medically unnecessary” quantities of oral contraceptive pills and birth control patches to C-Mail Medicaid patients and doing so without a prescription; (2) fraudulently billing the Iowa Medicaid program for abortion-related services; and (3) coercing “donations” from Medicaid patients.

In an op-ed Thayer wrote in 2017, she elaborated further:

Planned Parenthood advertises that services and supplies are free, but when Medicaid-eligible women are served, it is expected they donate fifty percent of the total cost for the visit…. Planned Parenthood receives $542,000,000 in federal funding, yet asks women who live at or below the poverty line, who depend on federally-funded healthcare to make a donation — proof that Planned Parenthood is much more concerned about its bottom line than women in need.

“Planned Parenthood counted those payments as voluntary donations and billed the full amount to Medicaid,” Thayer recounted in her 2015 testimony, adding, “There is a reason that, despite technically being a nonprofit, Planned Parenthood has reported $765 million in excess revenue over the last 10 years. It is run very much like a business – focused on increasing revenues, placing its own bottom line above the interests of women. And yet leadership would take expensive trips to Europe and Russia and throw elaborate parties at fancy venues.”

In addition, Thayer discussed the alleged fraud accusations in the video below:

According to the ADF/CLI report, Johnson “alleged that Planned Parenthood of Houston and Southeast Texas filed at least 87,075 false, fraudulent, or ineligible claims with the Texas Women’s Health Program.” 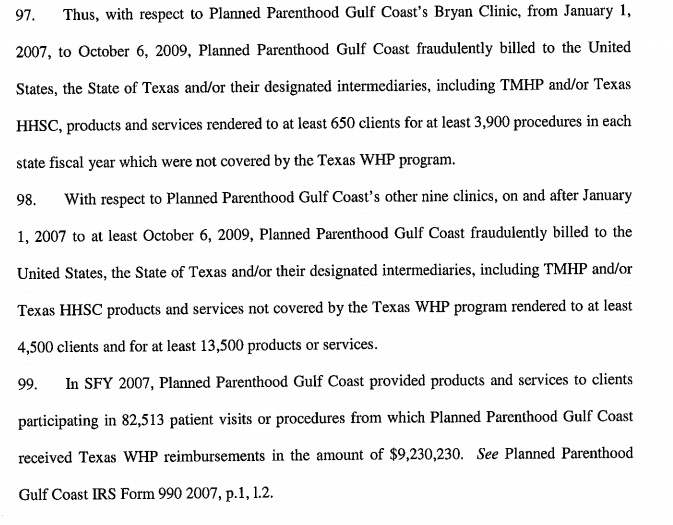 According to a report published by LifeSiteNews, the lawsuit also claimed:

… Planned Parenthood held a meeting in late 2008 or early 2009 to inform its clinic directors that it had been falsely billing the Texas WHP since January 1, 2007.  Johnson says that when she asked “what are we going to do about” the money that Planned Parenthood had improperly received, her supervisor answered, “Well, we are going to hope we don’t get caught.”

Today, due in part to the broken promises of politicians to defund Planned Parenthood, American taxpayers are still forced to hand over $1.5 million per day to this fraudulent organization.

It is past time to stop this abuse and defund Planned Parenthood.