Planned Parenthood continues to bemoan the closing of several of its own centers by its own choice (they’re still fully funded, after all, receiving half a billion in taxpayer dollars annually), while falsely claiming poor women would have no health care options without their services. Thousands of federally qualified health care centers could be receiving those funds. Instead, the highly political Planned Parenthood is using those funds in an attempt to organize a political army.

Cecile Richards doesn’t have a health care background. She was chosen for the role of president of Planned Parenthood because of her skill as a political organizer. A look at her activism as a political cheerleader for Democratic Party causes reveals how the nation’s largest single abortion provider is far more interested in advancing an abortion agenda than in anything else.

Cecile Richards began her political activism at a very young age. As the daughter of the late Ann Richards, former Democratic Governor of Texas, Cecile Richards was raised in progressive left-wing politics and she is very comfortable in the political sphere.

According a 2012 report in the Dallas Morning News (DMN), “Richards… has been a hell-raiser since high school: a student protester in her teens…. Cecile was sent home from junior high school for wearing a black armband to protest the Vietnam War.”

Richards was even on the scene in the days of the Roe v. Wade decision, which forced legalization of abortion on the nation, says the DMN:

Not quite 15 years old, Cecile joined her mother to campaign for a young Austin lawyer, Sarah Weddington, who was running for state representative in 1972…

In January 1973, the U.S. Supreme Court issued its landmark opinion in Roe vs. Wade, the case that legalized abortion. Weddington was the attorney who successfully argued the case before the high court. And Ann Richards [Cecile’s mother] became her legislative office manager at the state Capitol.

In 1980, Richards graduated from Brown University with a bachelor’s degree in history.

She told a reporter at the New Yorker, “I missed my graduation, because I was protesting against nuclear power—or maybe it was against apartheid.”

“Organizing” is the family business 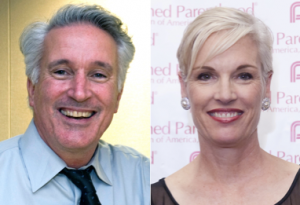 According to the New Yorker, Richards “went to work as a labor organizer, first with garment workers in the Rio Grande Valley and then with hotel workers in New Orleans, where she met her future husband, Kirk Adams, who is now an official with the Service Employees International Union [SEIU]. They have three children. Lily, the oldest, is the press secretary for Tim Kaine, the Democratic senator from Virginia.”

Since that report, Richards’ daughter Lily Adams has gotten a new job… as Communications Director to former California Attorney General Kamala Harris — now a U.S. Senator. Yes, THAT Kamala Harris — the one that Planned Parenthood donated to, and the one that, as AG of California, brought criminal charges against Center for Medical Progress founder David Daleiden, who used undercover video to expose Planned Parenthood’s gruesome part in trafficking fetal body parts.

Although Kirk Adams left his position at the SEIU in 2015, the SEIU has been a long-time political ally of Planned Parenthood, partnering with the abortion corporation to elect pro-abortion candidates to office.

According to public tax reports, Planned Parenthood paid the SEIU-CC LLC, more than $1 million in 2012 and $816,847 in 2011 for telemarketing services.

Not to worry — there is no conflict of interest to see here; move along.

Not such strange bedfellows after all

The Dallas Morning News interestingly described the Adams and Richards as pledging themselves to “the liberal wing of the Democratic Party.” 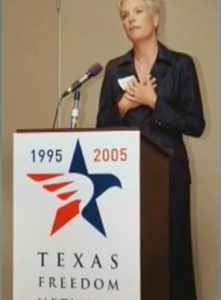 In 1995, Cecile Richards founded the Texas Freedom Network, doing so because she was “alarmed about what she saw as the religious right’s takeover of the State Board of Education, an elected body that adopts curriculum guidelines and textbooks for public schools.” Apparently, Richards was opposed to creationism being taught in schools along with evolution, calling it “bad science.” (Seems ironic, given that Planned Parenthood is so opposed to the science about human life, but I digress.)

According to the Austin-based organization’s mission, the Texas Freedom Network acts “as the state’s watchdog for monitoring far-right issues, organizations, money and leaders.”

TFN supports legalized abortion, organizing summits to raise up young people to push abortion rights in the state. These events appear very similar to events Planned Parenthood is holding across the country.

Today, Cecile Richards remains on the Board of Directors of TFN. Despite this fact, Planned Parenthood has promoted TFN studies on sex-ed without a disclaimer of potential conflicts of interest. TFN has done the same, issuing reports with no conflict of interest disclaimer.

In 2003, a report published by the Brownsville Herald revealed that Richards co-founded America Coming Together (ACT), a political action committee, described by the paper as a “Democrat-leaning group.” ACT was headed by Ellen Malcolm, president of the radically pro-abortion group Emily’s list, and funded largely by Democrat multimillionaire (drumroll, please)… George Soros.

Richards was also president of another political organization called America Votes, which, according to their bio at Open Secrets, “Coordinates the activities of more than 20 Democratic interest groups…” 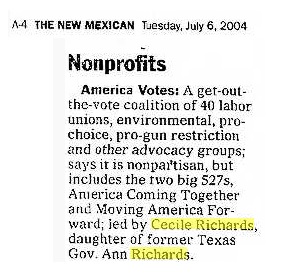 Cecile Richard’s resume as a political organizer (not a health care agent) goes even further.

In 1998, Richards took a job “at the Turner Foundation for media mogul and abortion propagandist Ted Turner.” According to the Dallas Morning News, Richards eventually “worked on women’s issues with Jane Fonda and the Ted Turner Foundation.” She also “served as deputy chief of staff for U.S. Rep. Nancy Pelosi, the California Democrat; then helped found America Votes, a national organization dedicated to progressive causes.”

In 2006, Richards was recruited to Planned Parenthood’s board, and it was no accident that they chose her. Live Action News’ Rebecca Downs explains:

Following Cecile’s appointment as Planned Parenthood president, the abortion corporation went from receiving nearly $836K in taxpayer dollars per day ($305 million/year) in 2005 to $1.5 million a day ($554.6 million/year) in 2015.

While taxpayers are forced to fund an abortion corporation which ends the lives of over 900 preborn children per day, Planned Parenthood increased its excess revenues from $55.8 million in 2005 to a whopping $77.5 million last year alone. Its executives, especially its chief organizer, are paid extremely high salaries.

Open Secrets website shows that in 2016, the overwhelming majority of Planned Parenthood PAC’s federal contributions were given to Democrat House and Senate candidates.

A separate search (October 2017) at the Open Secrets website reveals that Richards has personally donated to a number of Democrat causes and politicians, like Barack Obama, Hillary Clinton, and the Democrat Senatorial Campaign Committee.

She gets those dollars from her hefty (nearly $1 million) salary at the abortion corporation, a salary paid in part from money taxpayers are forced to give.

While Americans are free to work on political causes organizations as they choose, the public has a right to know how politically one-sided the head of Planned Parenthood, a purported “health” organization, is.

Since Cecile Richards took office, Planned Parenthood has garnered nearly 35 percent of the abortion market and has received nearly $5 billion in tax dollars from Congress — while Planned Parenthood’s actual health services and patient numbers are dwindling.

Government dollars flow to this corrupt organization, and flow back out to abortion-supporting politicians. Richards’ role at Planned Parenthood is not about health care; it is about political organizing, plain and simple.